Weston-super-Mare is a maritime watering place in the county of Somerset, seated on the margin of a spacious bay, near the Bristol channel, and backed by an elevation called Weston or Worlebury hill, which completely protects it from the north and the north-east winds. It is distant 142 miles W. by S. from London, 22 S.W. from Bristol, a similar distance N.W. from Wells, 10 N.W. from Axbridge, and about 1 mile from the Bristol and Exeter railway, to which it is connected by a branch. The population of Weston, with its hamlets of Ashcombe and Milton, amounted in 1801 to only 108; but in 1841 it had increased to 2,036, and at the present period its number must far exceed even that calculation. Forty years ago this was an obscure, isolated, and insignificant village, consisting of only 24 huts, which were irregularly scattered about the shore, and inhabited by poor fishermen: but what a change has been effected, and what a contrast now presents itself, through the energy and enterprise of persevering speculators and spirited capitalists. Weston, now a favourite and well frequented watering place, the fixed abode of many affluent families, a summer resort of almost numberless fashionable visitors, and the winter residence of scores of invalids and others in search of health, for whose accommodation a variety of houses have been erected on charming sites; its hill sides are studded with temples of health and mansions of the rich; and its ocean-bounded valley is thickly covered with handsome habitations, in rows and detached, consisting partly of shops, but chiefly lodging houses close to the sea; so that those valetudinarians who are confined to their rooms, enjoy all the advantages to be derived from the balmly influence of the marine breeze; whilst others, whose strenght will permit, can at once walk on the fine firm sands of Weston’s extensive beach. Such has been the prosperity of this modern town, that it now contains nearly 400 houses, and, moreover, it is continually being improved in appearance, and increased in size; nor can we wonder at its present proud position, when we consider the peculiarity of its site, the mildness of its atmosphere, the superiority of its sea bathing, the flatness and extent of its sandy shore, the beauty and variety of its walks and rides, the abundance and excellency of its provisions, the numerous and genteel society now formed in the town, the advantages it possesses of a pure gospel ministry both in and out of the Establishment, and which, together with a constant supply of rational and refined amusements, have rendered Weston well worthy of its prosperous progress, and one of the most healthy and agreeable towns in the West of England. The government of the town is vested in 18 commissioners, elected by the ratepayers of the parish, pursuant to a local act, entitled the “Weston-super-Mare Improvement and Market Act,” and by which Weston is priviliged to hold a market daily, when butcher’s meat, poultry, fish, fruit, and vegetables, are exhibited for sale.

The places of worship are two churches and three chapels, two of the latter belonging to the Wesleyans, and one the the Independents. The parish church is a large handsome edifice situated on the acclivity of the hill towards Worlebury, and the other, a district church, is a fine new building erected in 1847. One of the Wesleyan chapels has been built, within the last seven years, as have also the town hall and a national school, and a neat chapel is now being erected for the Baptists.

POST-OFFICE, Weston-super-Mare, Post-Mistress, Mary Gibbons. Letters are delivered daily at 8 a.m. Money orders are granted and paid from 10 to 6, except during the time of making up the bags. Despatches to London and all parts at 4 p.m. Box closes at 3 30 p.m.; but letters may be posted for each mail by affixing an additional penny postage stamp, until the making up of the bags. Bridgewater and the West, 7 50 a.m.; box closes at 7 a.m.; Wells, 3 40 p.m.; box closes 3 30 p.m.

Post Office, Worle, at Susan Watts’. London and all parts, via Weston-super-Mare, at 2 30 p.m.

Bristol, Jones, from the Railway Inn, Tues. Thurs. and Sat. 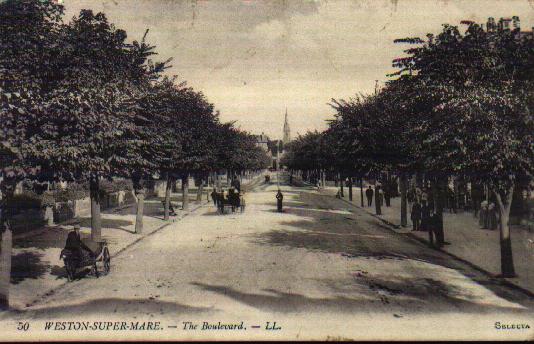