Stourton, a parish in Wiltshire, 2½ miles WNW of Mere, and 7 from Gillingham station on the L. & S.W.R. It has a post office under Bath; money order and telegraph office, Bourton. Acreage, 3496; population, 410. There is a parish council consisting of seven members. Stourhead, separately noticed, is the chief feature. The living is a rectory in the diocese of Salisbury; net value, £380 with residence. The church is ancient, contains monuments of the Stourtons and Hoares, and was restored in 1878. The churchyard is ornate, and contains a lofty stone cross, the mausoleum of the Hoare family, and a monumental tower over the remains of Sir R. C. Hoare, the author of " Ancient Wiltshire."

Findmypast, in association with the Wiltshire Record Office, have the following parish records online for Stourton: 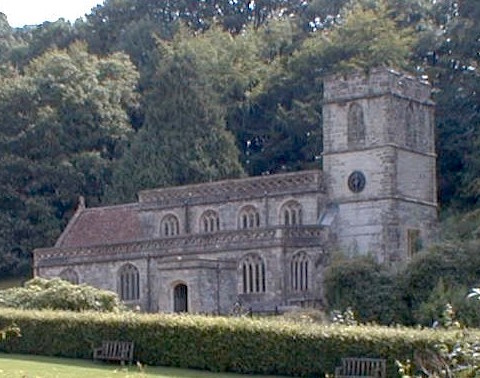 The parish church of St. Peter is an edifice of stone in mixed styles, consisting of chancel, nave of three bays, aisles, north porch and a western tower containing 6 bells, the sixth having been added in 1881: in 1878 the chancel was new roofed, fitted with oak stalls and re-floored, a new east window and reredos being erected at the same time: the Hoare monuments were also removed to the south aisle and an organ chamber and vestry built: there are many memorials of the Stourton family and several stained windows: the church affords about 250 sittings.

We have transcribed the entry for Stourton from the following:

Online maps of Stourton are available from a number of sites:

Stourhead House and Gardens, the ancestral family home of the Hoare banking family.