Radnorshire or Radnor, an inland county of South Wales, bounded on the NW and the N by Montgomeryshire, on the NE by Salop, on the E by Herefordshire, on the S and the SW by Brecknockshire, and on the W by Cardiganshire. Its boundary with Salop is traced by the river Teme, with Brecknockshire and part of Herefordshire by the river Wye. Its greatest length from E to W is about 36 miles, its greatest breadth is about 30 miles, its circuit is about 120 miles, and its area is 301,164 acres. The south-eastern parts are comparatively level, but the other parts are prevailingly hilly and mountainous. The highest ground is Whimble Hill, in Radnor Forest, 2163 feet high, and other summits are 1850,1750, 1650, and 1550 feet high. The scenery includes several very striking spots, but in general cannot be called picturesque; yet, on the whole, exhibits a certain peculiarity of character. The hills and mountains for the most part are massive, rounded, and green, and they combine with the intersecting vales and the south-eastern tracts to suggest a grand idea of pastoral life. The chief streams, besides the Teme and the Wye, are the Elan, the Ithon, the Edw, the Bachwy, the Arw, the Somergill, the Marteg, and the Clywedog. The chief lakes are Llanby-chllyn, Llyn Gwyn, and Llyn Glanhillin, and the first is only about 1 1/2 mile in circuit. Mineral springs are at Llandrindod, Llandegia, Penybont, Llananno, Llanbadarn, Fynydd, and Llanbister, and some of them possess high medicinal value, and are supposed to owe it to the decomposition of iron pyrites and other minerals at intersections of stratified rooks with trap. Silurian rocks occupy much the larger portion of the entire area, old red sandstone occupies a considerable tract in the SE, a very fine mass of altered and crystalline limestone occurs at Nash Scar, and trap of peculiar and very interesting character forms a ridge of about 3 miles along the Stanner, the Worzel, and the Hanter Hills, and another of about 1 1/2 mile in length in Old Radnor Hill. Limestone is worked in the vale of Radnor, lead has been found at Cwm Elan, and traces of lead and copper are at Llandrindod.

The soils for the most part are thin and poor, but in the best tracts, in the vales and on other low grounds, are clayey, with some admixture of loam. Only about one-fourth of the entire area is under tillage, and about two-thirds are mountain, bog, and waste, while nearly two-thirds are un-enclosed. The hills are plentifully stocked with game, and according to Leland they once abounded with wild deer. Ancient forests covered vast tracts, yet have left scarcely a vestige, but modern plantations now clothe the sides of many of the vales. The crops raised on the arable lands are chiefly barley, oats, rye, pease, and clover, and the live stock fed on the pastures are chiefly small sheep of from 8 to 10 Ibs. the quarter, cattle of the Hereford breed, and small, active, hardy ponies.

Manufactures embrace little more than ordinary artifi-cerships and the home-spinning of coarse woollens. The L. &N.W.R. enters the county near Knighton, and traverses it SW, leaving it at Builth Road. The Cambrian railway, in the valley of the Wye, skirts the western boundary. The G.W.R. penetrates The eastern boundary as far as New Radnor and Presteigne.

According to the census returns issued in 1893, the chief occupations of the people of the county were:-Professional, 260 males and 136 females; domestic, 42 males and 1578 females; commercial, 265 males and 4 females; agricultural, 3228 males and 118 females; industrial, 1683 males and 503 females; and " unoccupied," including retired business men, pensioners, those living on their own means, and others not specified, 1040 males and 4257 females; or a total in the county of 6518 males and 6596 females. The number of men employed in the leading industries was as follows:- Agricultural labourers, 1425; farmers, 1026; and general labourers, 280. The chief occupations of women were- domestic service, with a total of 1364; millinery and dressmaking, 234. There were also in the county 16 blind persons, 10 deaf, 98 deaf and dumb, and 31 mentally deranged. There were 75 persons able to speak only the Welsh language, and 924 who could speak both Welsh and English.

The county contains sixty-one civil parishes or townships, forty-one entire ecclesiastical parishes, and parts of five other ecclesiastical parishes, but contains no municipal nor parliamentary borough. It sends one representative to the House of Commons. The administrative county is co-extensive with the ancient or geographical county. It contains one court of quarter sessions, and is divided into seven petty sessional divisions. The market-towns are Presteign, Knighton, and Rhayader, and the chief seats are Abbey-cwm-Hir, Boultibrook, Evenjobb, Harpton, Cwm Elan, Disserth Castle, Hoyadd, Knill Court, Llanelwedd, Maeslough, Norton, Peny-bont, Penycerig, and Stannage. The county is governed by a county council consisting of eight aldermen and twenty-four councillors. It is in the western military district and the South Wales judicial circuit, and is chiefly in the diocese of St David's, but partly in that of Hereford. The assizes and quarter sessions are held at Presteign. Population, 21,791.

The territory now forming Radnorshire was inhabited by the ancient British Silures, was included by the Romans in their Britannia Secunda, formed part of Ferregs in the kingdom of Powis, and was not made a county till the time of Henry VIII. The great families of Mortimer and De Braos gained footing in it soon after the Norman Conquest, and Llewelyn the Great figured in it in his last days. British camps are at Gaer, Llanfihangel Mellyn, and Wapley, and there are some carneddau. A Roman camp is at Cwm Collen, and Roman roads went thence to Carmarthen and Brecon. Offa's Dyke enters from the N near Knighton, and runs along the E border. Old castles were at Cymaron, New Radnor, Aberedwy, Painscastle, and Boughrood, and an abbey was at Abbey-cwm-Hir.

The Chapman code for Radnorshire is RAD.
Chapman codes are used in genealogy as a short data code for administrative areas, such as county and country names.

The Return of Owners of Land in 1873 for Radnorshire is available to browse.

Old map of Radnorshire circa 1895 (Gazetteer of England and Wales) 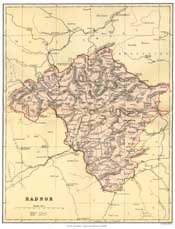