Derbyshire or Derby, a Midland and almost central county, nearly equidistant from the eastern and the western seas, and from Scotland and the English Channel. It is bounded on the NW by Cheshire, on the N and NE by Yorkshire, on the E by Notts., on the SE by Leicestershire, on the S by Warwickshire and Staffordshire, on the W, by Staffordshire and Cheshire. Its length south-south-eastward is 66 miles, its greatest breadth 84 miles, its circuit about 176 miles, its area 658,624 acres. The southern portion, as far as Belper, is low country, diversified only by undulations and inconsiderable heights; the middle and north-eastern portions are hilly, and have rich diversities of dale and rock; and the north-western portion rises into the mountains of the High Peak, a conspicuous part of the backbone of England, has several summits nearly 1800 feet high, and presents a striking mixture of arable bottoms, upland pastures, barren moors, precipitous cliffs, and romantic scenery. The chief rivers are the Trent, the Derwent, the Dove, the Wye, the Erewash, the Etherow, the Goyt, and the Rother, Warm springs are at Matlock, Buxton, and Bakewell, sulphur springs at Kedleston, and a chalybeate spring at Quarndon. Rocks of new red sandstone occupy nearly all the county south of Ashborne, Duffield, and Sandiacre; and rocks of the carboniferous series, ranging from the lower limestone and shale through the upper limestone and the millstone-grit to the coal-measures, occupy all the centre and the north. Building-stones and roofing slates are quarried; marbles, spars, white chert, and fine clays are worked; mineral caoutchouc, quartz diamonds, toadstone, manganese, calamine, galena, barytes, and many other rare or valuable minerals are found; and lead, iron, and coal are mined.

The soils, over most of the south, and over a large tract of the north-west, are prevailingly reddish clay or marl, those in the lower and wider part of the valleys are partly alluvial, those of a tract along all the east, from Stanton-by-Dale northward, are clays of various qualities, and those in the north are alternations of clays and moorish or peaty moulds. Agriculture is well advanced in the south, but backward in the north. Many farms are small, and comparatively few are on lease. Wheat and barley, the latter for the Burton breweries, are much grown in the south, and oats and potatoes in the north. Cheese of good quality, often sold to Cheshire or Gloucester, is largely produced, in many parts, especially in Dovedale. The cattle are chiefly of the Staffordshire breed, but include many crosses. The sheep are mainly Leicesters or a smaller breed. Hogs are reared for the market in many parts, and asses and active black horses are bred for service in the north-west.

The chief mineral products of the county are coal (annual output over 11,000,000 tons), iron-ore (annual output over 13,000 tons), pig-iron (annual manufacture nearly 500,000 tons), lead (output 3000 to 4000 tons), and potter's clay (output over 20,000 tons). Small quantities of manganese and zinc ores are raised, and gypsum to a considerable extent. The manufactures are silk throwing, cotton yarn, elastic web cotton, silk hosiery, and wrought marble. Mailing and brewing are carried on very extensively, and there are large iron-foundries. Derbyshire is well supplied with railways, which belong mostly to the Midland Company. The trunk line from Exeter to Newcastle and Edinburgh passes through Burton, Derby, Belper, and Chesterfield, so as to run through Derbyshire from north to south. At Burton the line formed by the Leicester and Swannington, and the North Staffordshire, passes through the south, sending off brandies to Tutbury and Ashborne. The main line from London through Leicester sends off branches to Nottingham, the Erewash Valley, through Codnor to Clay Cross, Belper to Ambergate, and from Ambergate to Matlock, Rowsley, Buxton, &c., and from Derby continues its direct course to Carlisle and Scotland. The M.S. & L.E. passes through Glossop, find skirts the north-western part of the shire. The Manchester and Sheffield line to Hull passes on the north-cast from Sheffield to Worksop. The Cromford and High Peak railway is a tramway beginning at Cromford on the Manchester, Buxton, and Ambergate railway, and runs in a line with it, again joining it to the west of Chapel-en-le-Frith, to which it has a branch. The Dore and Chinley line was opened in 1894. It was constructed by the Midland Company, and very much shortened the distance between Manchester and Sheffield. It runs westwards from Dore-and-Totley railway station (near Sheffield) past the Peak, and joins the Midland main line to Manchester, half-way between Chinley and Chapel-en-le-Frith stations. The Trent and Mersey Canal traverses part of the south; the Erewash Canal goes up the southern part of the east, contiguously to Notts, the Derby Canal connects Little Eaton and Derby with the Trent and Mersey and the Erewash; the Cromford Canal connects with the northern part of the Erewash, and traverses the centre; the Chesterfield Canal traverses the north-east from Chesterfield into Yorkshire; and most have connection with tram railways for mining produce.

For parliamentary purposes the county is divided into seven divisions, viz.;—High Peak, North East, Chesterfield, Western, Mid, Ilkeston, and Southern. It also includes the parliamentary borough of Derby. The county contains three municipal boroughs— Chesterfield, Glossop, and Ilkeston— and the county borough of Derby. There are 312 civil parishes and 240 entire ecclesiastical parishes and districts, and parts of 11 others.

The county is governed by a lord-lieutenant and a county council consisting of 60 councillors and 20 aldermen. It is in the Midland military district and judicial circuit. The assizes and the quarter sessions are held at Derby. For ecclesiastical purposes the county is situated in the dioceses of Lichfield, Peterborough, and Southwell.

The territory now forming Derbyshire belonged anciently to the British Coretani, was included by the Romans first in their Britannia Prima, next in their Flavia Cæsariensis, and afterwards formed part of the kingdom of Mercia, and was with Notts distinguished from other parts by the name of Merciæ Aquilonares. Much of it was given by the Conqueror to William Peveril, and many places in it, both in earlier and later times, were scenes of conflicts; but its history generally is so interwoven with that of great surrounding tracts, or with that of the kingdom at large, that it cannot well be separately narrated. British remains exist in stone circles at Arbor-low and Stanton Moor; cromlechs and standing-stones at Harthill Moor, Abney Moor, Eyam Moor, Froggatt-Edge, and Hathersage Moor; rocking stones at Stanton Moor, Rootor Rocks, and Ashover Common; fortifications and earthworks at Hathersage, Staden-Low, Pilsbury, Great Finn, and Combe Moss; remains of habitations at Harthill Moor, MiddIeton-by-Youlgrave, and other places; and numberless tumuli and other relics in the northern uplands. Roman remains exist in the workings of several lead mines, camps near Pentridge and at Parwich, vestiges of stations at Little Chester, Buxton, and Gamesley, traces of Ryknield Street, past Little Chester to Chesterfield, of Long Lane, from Little Chester to Chesterton, and of other Roman roads from Buxton to Brough, to Gamesley, and toward Manchester, and in great numbers of coins, utensils, personal ornaments, articles of armour and pottery, and sepulchral relics. Old castles occur at Mackworth, Castleton, and Codnor; ruined old mansions at Had-don and South Wingfield; and remains of monastic edifices at Dale, Beauchief, Gresley, Repton, and Yeaveley.

The following, according to the Redistribution of Seats Act of 1885, are the parliamentary divisions of Derbyshire, which do not appear under any specific name:—

The Chapman code for Derbyshire is DBY.
Chapman codes are used in genealogy as a short data code for administrative areas, such as county and country names.

The Historical Directories web site have a number of directories relating to Derbyshire online, including:
Kelly's, Pigot, Slater, etc.

We have transcribed the entry for Derbyshire from the following:

A listing of the Hundreds in Derbyshire, with the parishes contained in them.

A transcript of the Derbyshire pages from the Return of Owners of Land in 1873 is online.

Old map of Derbyshire circa 1895 (Gazetteer of England and Wales)

A listing of the Poor Law Unions in Derbyshire, with the parishes contained in them. 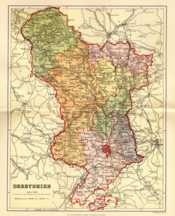