Monmouthshire or Monmouth, a maritime county of England, bounded on the NW by Brecknockshire, on the N and the NE by Herefordshire, on the E by Gloucestershire, on the S by the mouth of the Severn and the Bristol Channel, and on the W by Glamorgan. Its outline is not far from being pentagonal, with the sides facing the NW, the NE, the E, the ESE, and the W, but it projects a narrow tongue of about 7 miles from the NW side, and has an indentation of 9 miles by 5 at the SW corner. Its boundary along part of the N and along most of the NE is the river Monnow, along most of the E is the river Wye, and along all the W is the river Rhymney. Its greatest length, south-south-westward to the mouth of the Rhymney, is 82 miles; its greatest breadth is 29 miles, its circuit is about 124 miles, of which 24 are along the mouth of the Severn and the Bristol Channel, and its area is 341,688 acres. A tract along the coast called the Caldicott and the Wentlooge Levels is reclaimed marsh, embanked against the sea; nearly one-third of the entire area, inclusive of that tract, is rich champaign, either plain or slightly elevated ground; about one-third, northward thence, from the E boundary westward, is a charming diversity of hill and dale, abounding in landscape beauties both natural and artificial, and the rest is mainly a series of uplands, cloven with picturesque valleys and studded with romantic mountains. The chief heights in the E are Beacon Hill, overlooking the Wye, and rising to an altitude of about 1000 feet, and Kymin Hill and Wynd Cliff, commanding splendid views; and the chief mountains in the N and the NW are part of the Black Mountains, nearly 2000 feet high, the Sugar Loaf Mountain 1954, the Blorenge 1908, and Skyrrid Vawr 1601. The only rivers of any consequence besides those on the boundaries are the Trothy, running to the Wye near Monmouth; the Usk, traversing the county nearly through the centre windingly to the Bristol Channel 3 1/2 miles below Newport; and the Ebbw, traversing the W section from end to end, joined by the Sir-howy at about two-thirds of its length of run, and falling into the Bristol Channel at a common embouchure with the Usk. Devonian or old red sandstone rocks form much the greater portion of the county; rocks of carboniferous limestone and shale form a small tract in the SE around Chepstow and Caerwent, and appear in some other parts; rocks of the coal measures form a large tract in the W, from Pontypool westward to the boundary, and from the neighbourhood of Tredegar southward to the neighbourhood of Bedwas; and alluvial deposits from the tract of the Caldicott and the Wentlooge Levels. Mica and lead ore aro found, limestone is plentiful, and coal and ironstone are largely worked.

The soils in the low and level tracts are chiefly loams, variously light and heavy, with patches or intermixtures of sterile peat; those of the eastern, the central, and the northeastern tracts are of various character, generally fertile either under tillage or in meadow, and those of the upland tracts are mostly poor and shallow, rarely fitted for higher cropping than oats or barley, and mostly suited only for sheep pasture. Estates in general are large. Farms average from 100 to 200 acres, and are, for the most part, held at will. Wheat, barley, oats, potatoes, beans, pease, and turnips are generally grown. The cattle are of the large Hereford and other breeds. Mules are bred on the hills.

A considerable trade is carried on in bark and timber. The manufacture of flannel was at one time extensive, but has declined. The mining of coal and ironstone, the working of iron, and the export of mineral produce form by far the chief departments of trade. The principal works are at Pontypool, Aberyschan, Pentwyan, Blaenavon, Nantyglo, Beaufort, Tredegar, and the vales of the Ebbw, the Sirhowy, and the Rhymney. Brick and tiles are largely made and fireclay is produced ; there are also chemical works.

According to the census returns issued in 1893, the chief occupations of the people of the county were:–Professional, 3551 males and 2496 females; domestic, 500 males and 13,313 females; commercial, 11,580 males and 130 females; agricultural, 9585 males and 450 females; fishing, 76 males; industrial, 67,640 males and 8267 females; and "unoccupied," including retired business men, pensioners, those living on their own means, and others not specified, 14,852 males and 73,594 females; or a total in the county of 107,784 males and 98,250 females. The number of men employed in the leading industries was as follows:–Agricultural labourers, 4052 ; general labourers, 8271; coal miners, 24,341; iron and steel workers, 4664; and farmers, 2427. The chief occupations of women were–domestic service, with a total of 11,049 ; millinery and dressmaking, 3531. There were also in the county 268 blind persons, 109 deaf, 117 deaf and dumb, and 1056 mentally deranged. There were 9816 pel sons able only to speak only the Welsh language, and 29742 who could speak both Welsh and English.ineral workings throughout the W, together with canals and railways for facilitating their operations, have completely changed the face of the country, and converted pastoral solitudes into seats of teeming population. The canals of the county are under the control of the Great Western railway. The Pontypool section of the Monmouthshire Canal runs northward from Newport past Malpas and Pontaewydd to Pontymoyle, where it joins the Brecon Canal, which runs northward past Abergavenny. From Malpas a branch of the Monmouthshire Canal runs N, W, and N, past Risea to Crumlin. The county is very well supplied with railway lines. The G.W.R. monopolises the eastern portion, the main line from London entering by the Severn Tunnel, and running westwards by Newport and Cardiff. Another important G.W.R. line enters the county near Pandy, and passes southwards by Abergavenny and Pontypool to Newport. Another G.W.R. line enters at Chepstow, another at Monmouth, while the Wye Valley line connects these towns. In the Western part of the county the G.W.R. still owns the largest mileage, but the L. & N.W.R. has a line running westward from Abergavenny, and sending down branches southward into the valleys to compete for the heavy mineral traffic from the coal fields.

The county contains one county borough, Newport, and one municipal borough. As constituted under the Local Government Act of 1888, it is slightly larger than the ancient or geographical county, containing (with Newport), 347,011 acres, with a population of 258,054, as compared with an acreage of 341,688, and a population of 252,416. It contains 144 entire, and parts of four other civil parishes. It has one court of quarter sessions, and is divided into eleven petty sessional divisions. The boroughs of Newport and Monmouth have separate commissions of the peace, but no separate courts of quarter sessions. The ancient county contains 120 entire, and parts of other ecclesiastical parishes in the dioceses of Llandaff and Hereford. Two members were formerly returned to the House of Commons by the undivided county, but under the Redistribution of Seats Act of 1885, Monmouthshire was divided into three divisions–Northern, Western, and Southern, each returning one member. One member is also returned by the Monmouth district of boroughs, consisting of Monmouth, Newport, and Usk. The county town is Monmouth; the market-towns are Monmouth, Newport, Usk, Abergavenny, Chepstow, Pontypool, Magor, and Blaenavon. The chief seats are Troy House, Llanvihangel Court, Abercarne, Llanover, Llanwern, Pontypool Hall, Tredegar House, Trostrey, Wynastow, Bedwelty, Bertholey, Clytha, Coldbrook, Dingestow, Itton, Llanarth Court, Llanthony Abbey, Llantarnam, Newton House, Piercefield, and St Pierre. The county is governed by a county council, consisting of 16 aldermen and 48 councillors, and it is in the western military district and the Oxford judicial circuit. The county prison is at Usk, and the pauper lunatic asylum is at Abergavenny. Monmouth is the headquarters of the Royal Monmouthshire Engineer Militia.

The territory now forming Monmouthshire was part of the country of the Silures, and came to be part of the Welsh Deheubarth, Gwent, and Morganwg. The Romans included it in their Britannia Prima, and erected in it five important stations-Blestium, supposed to be at Monmouth, Burrium at Usk, Gobbanium at Abergavenny, Isca Silurum at Caerleon, and Venta Silurum at Caerwent. The Saxons overran the territory when it was part of Gwent, but do not seem to have ever completely conquered it. The Normans adopted a new method of getting possession; for, instead of endeavouring to seize it in mass for the Crown, they attached it, piece by piece, in feudal tenure, to great barons. The barons made incursions at their own expense, entrenched themselves in fortified castles, built up their power mainly from their own resources, and in course of time resisted the Crown and assumed independent sovereignty. Animosities and feuds in consequence arose, distracted the country, and produced effects nearly or quite as disastrous as would have resulted from anarchy. Henry VIII. abolished the petty governments both here and in the other parts of the old Gwent and Morganwg territories, divided what is now Wales into twelve counties, and decreed what is now Monmouthshire to be a county of England. Yet Monmouthshire, though then delivered from the thrall of local despots, and made strictly a county directly under the Crown, was considered a Welsh county till the time of Charles II. The county, particularly at Chepstow and Raglan castles, made considerable figure in the Civil War of Charles I.; Chepstow Castle surrendered to the Parliamentarians in 1645, and was surprised by the Royalists and retaken by the Parliamentarians in 1648 ; and Raglan Castle made a prolonged and heroic stand for the king, was the last fortress of any distinction which held out for him, and eventually surrendered to Sir Thomas Fairfax. A Chartist insurrection of about 10,000 men occurred at Newport in 1839, came into collision with a small body of military and special constables, and resulted in the death of twenty of the insurgents, the wounding of many others, and the apprehension and transportation of the leaders.

Several Druidical circles exist on the hills. Ancient camps, some British and some Roman, are at Taliurum, Gaer, Campston Hill, Craig-y-Saesson, Craig-y-Gaereyd, Cwrt-y-Gaer, and Sudbrooke. The Roman Julian Maritime Way went from Caerwent by the coast toward Cardiff; the Roman Julian Mountain Way went from Caerleon by Usk and Abergavenny toward Brecon; and branches of that way went from Abergavenny to Monmouth, and from Usk. Old castles of note are or were at Caerleon, Usk, Skenfrith, Monmouth, Raglan, Llandilio, Llanfair, Llangibby, Llanvaches, Cresseny, Abergavenny, Dinham, Castell Glas, Newport, Pencoed, Pencow, Castell Tregreg, Caldicott, and Chepstow. Abbeys were at Tintern, Llanthony, Caerleon, Grace-Dieu, and Llantarnam ; monastic houses were at Abergavenny, Monmouth, Chepstow, Newport, Usk. Goldcliff, and other places; and ancient churches, or portions of them, of Norman or Early English dates still exist in numerous parishes.

The following, according to the Redistribution of Seats Act of 1885, are the parliamentary divisions of Monmonthshire, which do not appear under any specific name, and return one member each to the House of Commons:-

The Chapman code for Monmouthshire is MON.
Chapman codes are used in genealogy as a short data code for administrative areas, such as county and country names.

We have transcribed the entry for Monmouthshire from the following:

A listing of the Hundreds and Liberties in Monmouthshire, with the parishes contained in them.

Old map of Monmouthshire circa 1895 (Gazetteer of England and Wales) 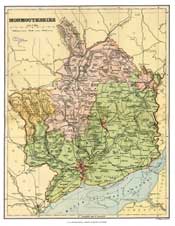