Montgomeryshire or Montgomery, an inland county of Wales, bounded on the N by Merionethshire and Denbighshire, on the E by Salop, on the S by Radnorshire, on the SW by Cardiganshire, on the W by Cardiganshire and Merionethshire. Its outline is somewhat irregular, with variety of indentations and projections, but may be described as pentagonal, with the sides facing the N, the E, the ESE, the SW, and the WNW. Its boundary lines are mostly artificial. Its greatest length, from NE to SW, is 37 miles; its greatest breadth is 29 miles; its mean breadth is about 21 miles; its circuit is about 135 miles; and its area is 510,111 acres. The surface in most of the E, to the mean breadth of about 5 miles, is a mixture of rich vale and pleasant hill, luxuriant, warm, and low; but the surface all elsewhere is chiefly mountain and moorland, bleak and wild. The Berwyn Mountains range along the NW boundary, and have a culminating altitude of 2104 feet; the Breidden Hills, with Moel-y-Golfa particularly conspicuous, form a striking group in the E; the Llandinam Hills, with culminating altitude of 1898 feet, are in the S; a great tableau, with average altitude of about 1000 feet, is in the centre; and the magnificent Plinlimmon, with altitude of 2469 feet, is on the SW boundary. Many of the heights, though less picturesque than those of some other Welsh counties, are more valuable, not a few of them being clothed with verdure to the summits. Comparatively low grounds also hang on the skirts of many of them, while numerous vales intersect them in all directions ; and these, taken with the rich tracts in the E, form a much larger proportion of fertile land than might be expected to exist in so prevailingly upland a region.

A line of watershed, dividing the basin of the Dovey from the basins of the Severn and the Wye, runs from N to S, and separates about one-fifth of the county on the W from about four-fifths on the E. The streams in the W portion, therefore, are all affluents of the Dovey, while those of the E are chiefly the Severn and its W affluents on to the influx of the Vyrnwy. The Wye rises under Plinlimmon, near the SW border, and has a run of only about 10 miles within the county. The Severn rises very near the source of the Wye, a little to the N; courses around and along the S, the SE, and the E, seldom further than 3 1/2 miles from the boundary; and receives, from within the county, the tributaries of the Clywedog, the Tarannon, the Rhiw, and the Vymwy; the last of which has the important affluents of the Banw, the Bechan, the Einion, the Brogan, the Cain, and the Tanat. Most of the streams are very fine, for at once their scenery, their water, and their fish. About a dozen small lakes, chiefly Begnelin, Glaslyn, LIyngwyddior, Llyn Hir, and Llyn-yr-Afange, add to the variety. Mineral springs are at Llanfair and Meifod. Silurian rocks form, with slight exceptions, the entire county; the lower Silurian throughout the NE and SW thirds, and the upper Silurian throughout the central third. Slate and limestone are worked, and millstones are quarried. Lead, zinc, and copper are found.

About one-eighth of the area is arable land, about one-third is pasture, and about one-half is common or waste. The soils in the vales are chiefly argillaceous, becoming more and more loamy and rich in the course of their descent; and those in the uplands consist chiefly of the detritus of schistose rocks. Agriculture, considering the natural disadvan-tageousness of the region, is in a very advanced condition. Cattle, butter, and cheese are exported in considerable quantities; a little cider is made; and oak plantations, to supply an exportation of oak for shipbuilding, are maintained. Flannel and woollen cloth are the chief manufactures.

According to the census returns issued in 1893. the chief occupations of the people of the county were:–Professional, 1032 males and 476 females; domestic, 172 males and 5025 females; commercial, 1241 males and 23 females; agricultural, 10,358 males and 608 females; fishing, 11 males; industrial, 8082 males and 2565 females; and "unoccupied," including retired business men, pensioners, those living on their own means, and others not specified, 4226 males and 18,146 females; or a total in the county of 25,122 males and 26,843 females. The number of men employed in the leading industries was as follows:–Agricultural labourers,. 4234; farmers, 3331; general labourers, 1466. The chief occupations of women were–domestic service, with a total of 4435 ; millinery and dressmaking, 952. There were also in the county 58 blind persons, 21 deaf, 40 deaf and dumb,. and 106 mentally deranged. There were 16,414 persons able to speak only the Welsh language, and 15,846 who could speak both Welsh and English.ambrian railway, coming from Oswestry, enters the NE corner of the county, and passes S and SW by Buttington, Welshpool, and Abermule, to Moat Lane Junction, whence one line goes SW to Llanidloes, while another goe& NW and W to Glandovey Junction. There are several branch lines in various parts, and from Bnttington the Shrewsbury and Welshpool Joint (L. & N.W.R. and G.W.R.) line runs. eastwards, giving important connections with other railways. The Montgomeryshire Canal is owned by the Shropshire Union Railway and Canal Company, and gives a communication of 24 miles along the valley of the Severn, with a branch of 3 miles to Gnilsfield. From Newtown the canal runs by Garth-myl, Berriew, and Welshpool to a junction with the Ellesmer& Canal at Carreghofa.

The county contains sixty-nine entire civil parishes and part of one other civil parish; and fifty-nine entire ecclesiastical parishes and parts of eleven others. It is included. chiefly in the diocese of St Asaph, but partly also in the dioceses of Bangor and Hereford. It contains four municipal boroughs–Llanfyllin, Llanidloes, Montgomery, and Welsh-pool. It has one court of quarter sessions, and is divided. into fourteen petty sessional divisions; the borough of Welsh-pool has a separate commission of the peace, but no separate-court of quarter sessions. It is governed under the Local Government Act of 1888 by a county council consisting of 14 aldermen and 42 councillors. One member is returned to the House of Commons by the county, and one by the Montgomery district of Boroughs, consisting of Montgomery, Llanfyllin, Llanidloes, Machynlleth, Newtown, and Welsh-pool. The market-towns are Welshpool, Newtown, Montgomery, Llanfair, Llanfyllin, Llanidloes, and Machynlleth. The chief seats are Lymore Park, Nantcribba, Bodfach,. Gregynog, Aberfechan, Aberiarth, Llwydiarth, Broadway, Bryngwyn, Dolforwyn, Dolgnog, Garth, Garthmill,Glanhafren, Greenhill, Leighton, Mathavarn, Mellington, Newtown House,. Rhiwport, Trelydan, and Vaynor. The county is in the western military district and the North Wales judicial circuit.

The territory now forming Montgomeryshire was part of the country of the ancient Ordovices; was included by the Romans in their Britannia Secunda; became part of the Welsh kingdom of Powys or Mathraval; was the scene of sanguinary struggles between the princes of that kingdom and the Saxon princes of Mercia; was overrun by the famous Saxon king Ofia, who built the dyke of his name along its E border, and included the eastern belt in his kingdom of Mercia; took afterwards the name of Sir Tre Faldwyn, signifying Baldwin's Towns-shire, from the same Baldwin, lord of the marches, who built a castle at Montgomery; was constituted a county directly under the English Crown by Henry VIII.; and made considerable figure in the Civil War of Charles I. Ancient British camps, cairns, and tumuli are numerous. The Sarn Hir Roman Way traversed the county by Meifod and Mathraval, and vicinal or diverging ways went from their Caer Sws station on the Sam Hir Way near Newtown. Another Roman, station was at Meifod, and Roman, camps are at Cefn Caer, Castell Caereinion, and Moelddelwyn. Old castles or remains of them are at Montgomery, Dolforwyn, and Powys; and Owen Glendower's old parliament house is in Machynlleth. Several of the oldest existing churches are curious structures, with ancient wooden upper storeys to the towers, and with wood-covered spires.

The Chapman code for Montgomeryshire is MGY.
Chapman codes are used in genealogy as a short data code for administrative areas, such as county and country names.

The Return of Owners of Land in 1873 for Montgomeryshire is available to browse.

Old map of Montgomeryshire circa 1895 (Gazetteer of England and Wales) 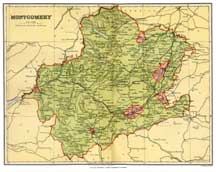