Merioneth or Merionethshire, a maritime county of North Wales, bounded on the NW by Carnarvonshire, on the N by Carnarvonshire and Denbighshire, on the NE by Denbighshire, on the SE by Montgomeryshire, on the S by Cardiganshire, and on the W by Cardigan Bay or the Irish Sea. It is separated from part of Carnarvonshire by the ravine of the Glaslyn river, from parts of Denbighshire and Montgomeryshire by the watershed of the Berwyn Mountains, and from part of Montgomeryshire and from Cadiganshire by the river Dovey. Its outline is somewhat triangular, with the sides facing the N, the SE, and the W. Its greatest length, south-westward, from the NE angle 2 3/4 miles beyond Gwyddelwern to the SW angle at Aberdovey, is 46 miles; its greatest breadth in the opposite direction is 29 miles; its mean breadth is about 15 1/2 miles; its circuit is about 140 miles, 30 of which are coast; and its area is 427,810 acres. The surface is very mountainous. The county, proportionately to its extent, contains a larger aggregate of lofty upland than any other county of Wales. One irregular group in the NW connects with the great Snowdonian range in Carnarvonshire, and culminates in the summits of Moelwyn and Cynecht at altitudes of 2529 and 2370 feet. A vast triangular group, with much tableland, commences immediately E of the preceding group, is separated from it partly by a narrow glen, partly by a wild peat morass, extends eastward to the vicinity of Bala, and culminates in Arenig at an altitude of 2800 feet. A lofty oblong range is separated from the first group by the vale of Festiniog, lies W of the second group, extends southward to the estuary of the Mawddach, measures nearly 15 miles in length and about 7 in breadth, and culminates in Craig-dwrg and Rhinog-fawr at altitudes of 2100 and 2390 feet. A comparatively small but very magnificent group rises immediately S of the estuary of the Mawddach, consists chiefly of Cader-Idris with its spurs and offshoots, and culminates in Pen-y-Gader and Mynydd-Moel at altitudes of 2949 and 2835 feet. A great chain commences near the SW extremity, in the vicinity of Aberdovey, extends in a well-defined wavy line north-eastward to the vicinity of Corwen, forms a grand barrier along the SE frontier of nearly the entire length of the county; commences in Arran-y-Gessel, with a culminating altitude of 2224 feet, splits near Dinas Mawddwy into two lines slightly diverging from each other, the one going north-north-eastward, the other continuing north-eastward ; rises in the north-north-easterly line to a culminating altitude of 2972 feet in the summit of Aran Mawddwy, forms throughout the north-easterly line the Berwyn Mountains, whose watershed divides the county from Montgomeryshire and Denbighshire, and culminates in these mountains on the summit of Cader Ferwyn or Berwyn at an altitude of 2716 feet. The general surface presents to a dull eye a bleak and dreary appearance, but presents to a quick one a vast amount of picturesqueness and romance. It has not the stupendous craggy wildness of Carnarvonshire, but is equal to it in calm sublimity, and superior in richness,. variety, and beauty. The mountains, if not so high, display more varied and beautiful colouring, as well as a more correct and elegant outline. Some of the finest, too, have the advantage of rising from low levels around magnificent glens in such a manner that their height, as seen from good standpoints, often appears to the eye to be greater than it really is. Both the glens and the mountain sides also are much better wooded than those of Carnarvonshire, and they derive from that circumstance, in combination with their own features, a richness of scenery which, in many parts, assimilates them to some of the most admired portions of Switzerland. The streams, likewise, abound in cascades; the estuaries of the Mawddach, the Traeth Bach, and the Dovey strike grandly inward from the sea, and the coast exhibits a constant succession of striking and varied views.

The chief rivers are the Dee, draining all the NE region through the lake of Bala, along the exquisite vale of Edeyrnion, and past Corwen to the vicinity of Llangollen; the Dovey or Dyfi, running along much of the SE boundary under Arran-y-Gessel to the sea at Aberdovey; the Dysynni, descending from Cader Idris to the sea in the vicinity of Towyn ; the Maw or Mawddach, making two grand falls, expanding into estuary in the vicinity of Dolgelly, and going thence to the sea at Barmouth; the Glyn, with a fall of 200 feet; the Cynfael, with a fall of 40 feet; the Dwyryd, the Glaslyn, the Eden, and others. The principal lake is that of Bala; others are Talyllyn, Elider, Treweryn, Y-cwmbychan, Bodlyn, Cwm Howel, Glyn, Arrenig, and Y-cae; and there are about fifty more, mostly pools or tarns, in the cwms or hollows of the mountains. The rocks are chiefly Cambrian and Silurian, of similar character to those of Snowdonia. Slates prevail through a great portion; a bluish grey limestone abounds in the NE ; and igneous rocks are largely protruded around the estuary of the Maw, particularly on its S side, and thence toward the NNE. Slate is extensively quarried; limestone is much used for manure; copper ores occur in the vicinity of Towyn, Dolgelly, Barmouth, and Aberdovey; lead ores are found near Towyn, Llanaber, Dolgelly, Tremadoc, Llanelltyd, and Dinas Mawddwy; and small quantities of silver and gold have been found near Dolgelly. Grouse is plentiful in some of the mountains; partridges are numerous in the low tracts; and fish of various kinds abound in the principal streams and lakes.

The soils are various. The vales and the sheltered portions of the coast contain some fertile fields, but even the best tracts elsewhere are comparatively sterile. About one-half of the entire area is waste or common. The inhabitants depend chiefly for support on sheep and cattle, on wool and the produce of the dairy. The dwellings of the peasantry in general are extremely rude; the farm buildings themselves for the most part are very poor, the fences are of stone or sods; and the chief fuel is peat. Upland farms are measured not by acres, but by the number of cattle or sheep they are considered able to maintain. The cattle on the hills are small, but those in some of the low tracts are an old, large, black Welsh breed. The sheep are whitefaced and coarse-woolled, from 9 to 12 Ib. per quarter. Goats till a comparatively recent period were reared in great numbers, but they were less compensating than sheepÐthey injured the bark of trees, and they went generally into disuse. A hardy breed of ponies, called merlins, are bred on the Berwyns and on some of the other mountains. The chief articles of manufacture, but these to no great extent, and principally around Bala, Corwen, and Dolgelly, are flannel webs and knit stockings. The Cambrian railway coming in from Carnarvonshire goes along the coast past Harlech, Barmouth, Towyn, and Aberdovey to Glendovey Junction. The G.W.R. enters the NE corner of the county near Corwen, and goes south-westward past Bala and Dolgelly, whence a branch of the Cambrian railway goes on to Barmouth. From Bala a branch of the G.W.R. traverses the N of the county to Festiniog, where it meets the Festiniog line coming from Portmadoc, and the L. & N.W. line, which enters the county here from the north. There are also three short lines in the extreme south of the county.

The administrative county of Merioneth is co-extensive with the ancient or geographical county. It is not divided for parliamentary purposes, and contains no parliamentary borough. It has one court of quarter sessions, and is divided into six petty sessional divisions. It has no municipal borough. It contains thirty-four civil parishes and parts of two others, and thirty-seven ecclesiastical parishes and districts and parts of four others. It is included partly in the diocese of Bangor and partly in that of St Asaph. Acreage, 427,810 ; population, 49,212. The market-towns are Corwen, Bala, Dolgelly, Dinas Mawddwy, Harlech, Barmouth, and Towyn; and there are upwards of 120 villages and hamlets. The chief seats are Glanylyn, Maesy Newadd, Nannau, Hengwrt, Cors-y-Gedol, Bronhaulog, Caerynwch, Peniarth, Glyn, Rhiwlas, Rûg, Aberhimant, Crogen, Talgarth, Tanybwich, and Ynysmaengwyn. The county is governed by a lord lieutenant and a county council, consisting of 14 aldermen and 42 councillors. It is in the northwestern military district, the North Wales judicial circuit, and sends one member to Parliament. The Lent assizes are held. at Bala, and the summer ones at Dolgelly.

According to the census returns issued in 1893, the chief occupations of the people of the county were:–Professional, 1191 males and 513 females; domestic, 135 males and 4715 females; commercial, 1469 males and 20 females; agricultural, 6881 males and 605 females; fishing, 12 males and 1 female; industrial, 10,635 males and 1936 females; and "unoccupied," including retired business men, pensioners, those living on their own means, and others not specified, 3983 males and 17,708 females; or a total in the county of 24,306 males and 25,498 females. The number of men employed in the leading industries was as follows:–Slate quarriers, 3959; agricultural labourers, 2872; farmers, 2433 ; and general labourers, 1056. The chief occupations of women were–domestic service, with a total of 4248 ; millinery and dressmaking, 951. There were also in the county 69 blind persons, 20 deaf, 34 deaf and dumb, and 96 mentally deranged. There were 45,856 persons able to speak only the Welsh language, and 12,023 who could speak both Welsh and English.erioneth was known to the Romans as Mervinia, and to the ancient Welsh as Meironydd; and it is said to have derived its name from Meirion, son of Tibiawn, and grandson of Cunedda, a noble native chieftain who, in the 5th century, drove the Irish from the territory, and obtained in guerdon of his services extensive local possessions. It was inhabited by the Ordovices; was included by the Romans in their Britannia Prima; was divided by Roderick Mawr between the kingdoms of Aberffraw and Powys; and was constituted a county by Henry VIII. It made no figure in history in either the Saxon or the Norman times; yet it was the scene of many of those unnatural conflicts between tribe and tribe which disgrace the annals of Wales ; and it afterwards, particularly about Harlech, played an important part in the movements of Owen Glendower and in the Wars of the Roses. Druidical remains are at Moel-y-Goedog, Cors-y-Gedol, Llwyngwril, and Trawsfynydd. Pillar stones or cairns are at Trwyn, LIech Idris, Beddau-Gwyr-Ardudwy, and near Corwen. Ancient British camps or forts are at Tommen-y-Bala, Castell Prysor, Castell-Ddinas-Gortin, Craig-y-Ddinas, Moel Orthrwm, and Caer Drewyn. The Sarn Helen Way went through the county northward by Roman camps at Pennal, Cefn Caer, Castell Prysor, Maentwrog,and Rhyd-ar-Helen, to Tommen-y-Mur, anciently called. Hereri Mons; and the Sarn Hir Way or Southern Watling Street went thence by Caer Gai near Bala and through the Bwlch-y-Buarth Pass into Montgomeryshire. An interesting mediaeval castle is at Harlech; and remains of four others are at Castell Prysor, Castell-y-Beri, Carndochon, and Murcaston. Curious old mansions are at Llys Bradwen, Towyn, Sychnant, and some other places. An old abbey is at Cymmer, and was the only edifice of its class in the county at the Reformation.

The Chapman code for Merionethshire is MER.
Chapman codes are used in genealogy as a short data code for administrative areas, such as county and country names.

The Return of Owners of Land in 1873 for Merionethshire is available to browse.

Old map of Merionethshire circa 1895 (Gazetteer of England and Wales) 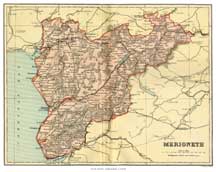