Glamorgan, a maritime county of South Wales; bounded on the S and SW by the Bristol Channel; on the W by the river Loughor, which divides it from Carmarthenshire; on the N by Carmarthenshire and Breconshire; and on the E by the river Rhymney, which divides it from Monmouthshire. Its greatest length, from W to E, is 52 miles; its greatest breadth, from N to S, is 27 miles; its mean breadth is about 13½ miles; its coast line is about 64 miles; its circumference is about 140 miles; and its area is 516,959 statute acres. A tract along the coast, called the Vale of Glamorgan, from 8 to 10 miles broad, is a fine plain, very fertile, and popularly known as the "garden of South Wales." The tracts on the N and the NE consist chiefly of craggy and almost inaccessible mountains, partly extending in chains, and partly cut into groups, or even isolated heights, by the deep courses of streams. Craig-y-Llyn, at the head of the river Rhondda, has an altitude of 1971 feet, and is the highest ground in the county. The surface as a whole is eminently picturesque, abounds in wild valleys and flashing streams, and combines in large degree the characteristics of Merionethshire with those of rich low country. The coast has a sinuous, almost semicircular sweep from end to end; terminates on the W in the peninsula of Gower; rises over a fine sandy beach into limestone rocks, sometimes soaring into cliffs 300 feet high, and often pierced with deep and lofty caverns, yet has few bays or inlets, and these of no great depth. The chief streams, besides the Loughor and the Rhymney, are the Taff, the Cynon, the Rhondda, the Rhondda Fechan, the Ely, the Ogmore, the Afon, the Neath, and the Tawe. Rocks of carboniferous limestone and shale, of new red sandstone and keuper marl, and of upper lias sand, clay, and marlstone, occupy considerable tracts along most of the coast; and rocks of the coal measures, with mountain limestone and old red sandstone, occupy nearly all the rest of the county. The boundary between the latter rocks and the former is a line drawn across the Gower pensinula, from Whitford Burrows to Oystermouth, by the shore of Swansea Bay; and a waving line drawn eastward from Margam, on that bay, by Llantrissant and Caerphilly, to the Rhymney. The coal, throughout most of the coal basin, is bituminous; but in the upper parts of the vales of Meath and Tawe is anthracite. A very thick "fault" exists near Swansea, traverses the coalfield, and raises the strata on one side as high as 240 feet, and there are many other " faults." The chief mineral obtained in the county is coal, of which its output is one of the largest among the counties of the kingdom, amounting to from 22,000,000 to 23,000,000 tons annually, valued at upwards of £10,000,000. Iron ore is also produced to the extent of 22,000 tons, while the annual product of pig-iron in the county exceeds 400,000. There are also extensive copper smelting works in the county, at Swansea, Landore, Port Talbot, Briton Ferry, and Cardiff, but the ore used is almost entirely imported, less than 1000 tons being obtained from British ores.

The soil, in the Vale of Glamorgan, is rich deep loam, improved in fertility by substratum of limestone or by application of lime; the soil, in the central tracts, ranges from poor detritus on the hills to rich alluvium in the valley bottoms; and the soil, in the northern and north-eastern tracts, varies from black peat on the heights, through brown gravelly earth in the drier situations, to a brown fertile loam in the valleys. The best tracts are so well plied with tillage as to be deficient in wood. The Vale of Glamorgan yields, on the average, 25 bushels of wheat per acre, from 30 to 35 of barley, 35 of oats, and 6 tons of potatoes. Beans, pease, turnips, mangel-wurzel, clover, and other crops are also grown. The farms, both arable and dairy, are of all sizes, and mostly on lease. The farm buildings and the cottages are of stone. The native cattle and sheep are useful breeds. The climate, on the seaboard and in the lower valleys, is so mild that myrtles, magnolias, and other delicate plants thrive in the open air.

A vast amount of manufacture is carried on in connection with mines and metals, and a considerable amount also in other departments. The county is well supplied with railwayl facilities. Branches of the G.W.E. and L. & N.W.E. traverse the county. The Taff Vale railway runs from Merthyr Tydfil to Cardiff and Cadoxton, and has branches up the Rhondda Valley to Aberdare, Llantrissant, Cowbridge, &c. Other lines are—the Rhymney, the Neath and Brecon, the Brecon and Merthyr, the Pontypridd, Caerphilly, and Newport, the Barry, the Rhondda and Swansea Bay, and the Swansea and Mumbles.

The ancient county is divided for parliamentary purposes into five divisions—viz., Eastern, Rhondda, Western or Gower, Mid, and Southern. It also includes the Cardiff district of boroughs (comprising the contributory boroughs of Cardiff, Cowbridge, and Llantrissant), part of the borough of Merthyr Tydfil, and the borough of Swansea, which contains two divisions, that of Swansea district including the contributory boroughs of Aberavon, Kenfig, Loughor, and Neath. It includes three municipal boroughs, namely, Aberavon, Cowbridge, and Neath. The county has one court of quarter sessions, and is divided into 12 petty sessional divisions. The boroughs of Cardiff, Swansea, and Aberavon have separate commissions of the peace, and the former two have also separate courts of quarter sessions. The county contains 155, the county borough of Cardiff 3, and that of Swansea 34,78 entire civil parishes. There are also six parishes which are situated partly in the county and partly in the county boroughs, and one parish situated partly in the administrative county of Monmouth. The county contains 140 entire ecclesiastical parishes and districts, and parts of 5 others. The principal seats are Cardiff Castle, Dunraven Castle, Margam, Penrice, Wenvoe, Baglan, Beaupre, Aberpergwm, Cefn-Mably, Cyfarthfa, Dyffryn, Ewenny, Fonmon, Gnoll, Llandough, Merthyr Mawr, Kilybebyll, Hensol, Penlline, Rheola, Singleton, and Woodlands, The county is governed by a lord-lieutenant and a county council consisting of 66 councillors and 22 aldermen. It is in the South Wales circuit and in the western military district, and it forms parts of the dioceses of Llandaff and St David's. The assizes are held at Swansea and Cardiff.

The territory now forming Glamorgan, together with the southern and eastern parts of Brecon, was once an independent principality, and bore the name of Gwlad Morgan or Morganwg, taken either from an ancient prince called Morgan or from the word Mor-Cant, signifying "sea border." It was separated from the principality of South Wales, which comprised the counties of Carmarthen, Pembroke, Cardigan, Radnor, and the rest of Brecon, and it formed main part of the region afterwards designated Gwent and Siluria—both of which names signifyt1 the fair land." The Romans included it in their Britannia Prima, and down to their withdrawal from it about 440 they permitted its native princes or reguli to hold a kind of nominal authority. These continued afterwards to maintain rule, and though much disturbed both by dissensions with the neighbouring princes of South Wales and by invasions of the Saxons and the Danes, did not lose their princely power till the times of the Normans. Robert Fitzhamon, a Norman knight of princely birth, co-operating with a native traitor, and taking advantage of intestine disturbance, seized the territory by force of arms in 1091, and, assuming the lordship of it to himself, assigned some of its estates to his principal followers, and some to the relatives and friends of the deposed native princes. At Fitzhamon's death in 1107 the lordship passed by marriage with his heiress to Robert, Earl of Gloucester, natural son of Henry I., and it afterwards went through various hands, among whom were the Earl of Warwick, known as the "king-maker," and Richard, Duke of Gloucester, afterwards Richard III. The authority of the lordship ceased in the time of Henry VIII., and the territory was then constituted a county under the rule of the English laws. Stone circles, cromlechs, or other ancient British remains exist at Gelligron, Dyffryn, Drummen, Cefn-Bryn, Marcross, and Kenfig. A British camp occurs near Bridgend. The Roman Julian Way went from Cardiff to Loughor, and was joined by the Sam-Helen Way at Neath. Roman stations were at or near Cardiff, Caerau, Boverton, Neath, and Longhor. Ancient castles or i emains of them are at Cardiff, Boverton, Caerphilly, St Donats, Neath, Swansea, Morlais, Llantrissant, St Pagans, Talavan, Powis, Penmark, Fonmon, Cogan, Wrinchstone, St Athans, Marcross, Coity, Bewper, Llanbliddian, Penlline Ogmore, Castell Coch, Sully, Penrice, Pennarth, Llandymore, Oxwich, and Oystermouth. Abbey ruins are at Neath and Margam, a priory at Ewenny, and interesting old churches at Llandaff, Llantrissant, Cardiff, Llantwit Major, and Eglwys Brewis. The county gives the title of Earl to the Duke of Beaufort.

The following, according to the Redistribution of Seats Act of 1885, are the parliamentary divisions of Glamorgan, which do not appear under any specific name:—
The Eastern, Division (population, 72,463) includes the following:—Caerphilly (Higher)—Gelligaer(part of), Merthyr Tydfil; Caerphilly (Lower, including the whole of the parish of Eglwysilan)—Eglwysilan, Gelligaer (part of), Llanfabon, Llanvedw (hamlet of), Rhydygwern (hamlet of), Rudry, Van (hamlet of); Miskin (Higher)—Aberdare, Llanwonno (part of), Rhigos; Miskin (Lower) or Pontypridd (part of)— Llantwit Vardre, Llanwonno (part of), Pentyrch.

The Chapman code for Glamorgan is GLA.
Chapman codes are used in genealogy as a short data code for administrative areas, such as county and country names.

Old map of Glamorganshire circa 1895 (Gazetteer of England and Wales) 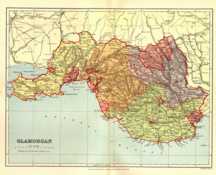