Flintshire or Flint, a maritime county of North Wales, comprising a main body and a detached district. The main body is bounded by the estuary of the Dee, the Irish Sea, Denbighshire, and Cheshire, and forms an oblong, extending north-westward, and measuring about 27 or 30 miles in length, and from 6 to 12 1/2 in breadth. The detached district is separated, at the mean distance of about 9 miles, by Denbighshire, lies on the right bank of the river Dee, is bounded on the S and E by Salop, and forms an oblong of about 10 miles by 6 1/2. The area of the entire county is 164,050 statute acres. It is thus the smallest county in Wales. The tract along the coast is level, finely sheltered, and highly fertile. The surface inland rises in variety of contour to the boundary with Denbighshire, includes toward that boundary the northeastern declivities of the Clwydian hills, and attains on the summit-line, in the peaks of Pen-y-Cloddiau, Moel Arthur, and Moel Fammau, elevations of 1452, 1491, and 1823 feet. The ravine of Holywell is the only picturesque spot on the coast, but many parts of the interior present fine scenery, and the summit-line of the Clwydian hills is cleft by several elevated roads or passes. The rivers Dee and Clwyd contribute beauty to respectively the detached district and the north-western corner, and innumerable streamlets, descending from the Clwydian hills, diversify and adorn many parts of the interior. The chief streams are the Alyn, going to the Dee, the Elwy, going to the Clwyd, the Terrig, the Wheeler, and some others. A carboniferous formation, comprising the coal measures, lies along the estuary of the Dee, and expands thence to the SE; a carboniferous formation, consisting chiefly of millstone grit, flanks the coal measures from end to end of the county; a formation of carboniferous limestone and shale commences near the coast and extends parallel to all the millstone grit; an upper Silurian formation, rising into the Clwydian hills, flanks most of the carboniferous limestone; and a trias formation of new red or Bunter sandstone, lies along the SW. The coal seams are surpassed in thickness only by those at Wednesbury in Staffordshire, and have been found in some places to possess an aggregate of 59 feet, within a depth of only 216 yards. Some of the coal contains 90 per cent. of combustible matter. Ironstone and a fine kind of silicious freestone abound in the coal tracts, and a rich hematitic iron ore is found in the mountain limestone. Lead is also abundant, and lead ore appears, from remains or traces of ancient smelting-hearths, to have been worked by the ancient Britons and Romans.

The soils of the low tracts show much diversity, according to the character of the detritus and the rocks, but in general are very productive, and those of the hills are for the most part a mixture of clay and gravel, with predominance of clay. Good crops of wheat are raised on all the seaboard's low lands. Barley, oats, rye, potatoes, and occasional green crops also are raised. The native horses and cattle are of fair size and character, the cows are excellent milkers, and the sheep, though crossed by the Southdowns and the Leicesters, are small. Butter, cheese, and wool are exported.

The chief mineral products of the county, with the average annual output, are as follows—coal, 850,000 tons; fireclay, 100,000 tons; lead, 4125 tons; zinc, 1251 tons; silver 35,000 ounces. Chemical manufacture is carried on at Flint, copper and lead works employ a number of persons at Holywell, and the produce of the mines is an abundant material of commerce.

The Chester and Holyhead branch of the L. & N.W.R. goes all along the coast; a branch from it goes to Mold, and another branch goes up the Clwyd. The Wrexham, Mold, and Connah's Quay railway goes from Wrexham to Hope, Buckley, and Connah's Quay. Good roads traverse most parts of the interior, and afford ready communication between towns and villages.

Flintshire contains 36 entire civil parishes and parts of six others, also 46 entire ecclesiastical parishes and districts and parts of 11 others. The towns in it are St Asaph, Flint, Mold, Holywell, Caergwrle, Caerwys, Overton, and Ehuddlan, and all these are boroughs, and the first of them a city. The chief seats are Halkin Castle, St Asaph Palace, Bettisfield Park, Downing, Gredington, Talacre, Bodelwyddan, Hawarden Castle, Kinmel Park, Leeswood Hall, Mostyn, Bodwhyddan, Plas Teg, and Golden Grove. The county is governed by a lord lieutenant, and a county council, consisting of 42 councillors and 14 aldermen. It is in the North Wales judicial circuit, and the north-western military district. It is included partly in the dioceses of Chester, Lichfield, and St Asaph. The assizes are held at Mold. One member is sent to parliament by the boroughs, and one by the county at large. Population in 1801, 93,469 ; in 1821, 53,893; in 1841, 66,919 ; in 1861, 69,737; in 1881, 80,587; and in 1891, 77,277.

The territory now forming Flintshire belonged anciently to the Ordovices, was included by the Romans in their Britannia Secunda, formed part of the Welsh Venedotia or Gwynedd, and was by the Saxons called Englefield, and made part of Mercia. The Picts and Scots overran it after the departure of the Romans, but were defeated by the British. The Northumbrians overran it in the 7th century, and perpetrated a fearful massacre at Bangor Iscoed, but were repelled by the Welsh. The Mercians, headed by their king Offa, overran and subdued it in the 8th century, and formed for its defence the great rampart called Offa's Dyke. The Normans annexed it to Cheshire. Henry II., during his vain efforts to subdue Wales, met serious repulses in Flintshire, yet contrived first to get possession of Rhuddlan Castle, and next to subjugate most other parts of this county. Llewelyn, in 1282, regained possession of all the county's strengths except Rhuddlan Castle, but Edward I. retook Caergwrle, maintained a severe struggle elsewhere with Llewelyn, and eventually pushed on to Conway. Later incidents will be found noticed in connection with the towns. Watling Street traversed the county from the boundary with Cheshire, through Bodfari toward Conway. Roman stations were at Bangor Iscoed, Caergwrle, and Bodfari. Wat's dyke, parallel with Offa's, and sometimes mistaken for it, extends from the neighbourhood of Basingwerk south-eastward into Denbighshire. Ancient pillars are at Diserth and on Mostyn Hill. Old castles are at Diserth, Flint, Caergwrle, Basingwerk, Rhuddlan, Mold, Hawarden, and Ewloe. An ancient cathedral is at St Asaph, an ancient abbey at Basingwerk, and ancient churches at Cilcain, Overton, Hanmer, and Holywell.

The Chapman code for Flintshire is FLN.
Chapman codes are used in genealogy as a short data code for administrative areas, such as county and country names.

The Return of Owners of Land in 1873 for Flintshire is available to browse. 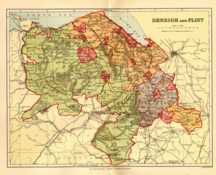