Staunton, White, a parish in Somerset, 3 miles WNW of Chard station on the G.W.R. Post town, Chard. Acreage, 1918; population, 205. The living is a rectory in the diocese of Bath and Wells; net value, £150 with residence. The church is later English, and was restored in 1882. The ruins of a Roman villa have been discovered in the grounds of White Staunton Manor House.

The Phillimore transcript of Marriages at Whitestaunton 1606-1811, Somerset is available to browse online.

The register dates from the year 1692.

The church of St. Andrew is a building of stone, in the Perpendicular style, consisting of chancel, nave, two chapels, south porch and a low embattled western tower containing 5 bells: one of the chapels, containing several tombs with shields of arms, serves as a vestry: there is also a brass tablet to the co-heiresses of John Brett, dated 1582, and in the nave are some benches with carved ends, bearing curious devices, taken from the arms of de Staunton and the borough of Chard: the chancel retains a piscina in the sill of the south window, and some very early heraldic tiles, bearing the arms of de Staunton and Montacute: the font of Whitestaunton stone is supposed to date from the 12th century: the stained east window is a memorial to the Rev. William Tierney Elton B.A. 46 years rector (1827-73), and his wife, and was erected by their children: a brass with the Victoria Cross upon it has also been erected to the memory of Lieut.-Col. F. C. Elton V.C. son of a former rector: the church was restored in 1882-3, at a cost of £620: the west window was restored and the tower door reopened and restored in 1913: there are sittings for 160 persons: nearly opposite the porch, and raised on steps of local stone, is the shaft of an ancient cross of Ham stone. 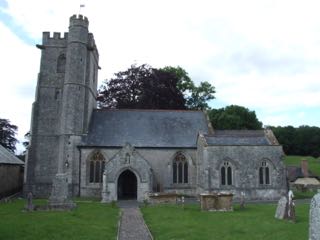 We have transcribed the entry for White Staunton from the following: