Lympsham, a village and a parish in Somerset. The village stands on the river Axe, 3 miles S of Weston-super-Mare, and 2 from Bleadon station on the G.W.R., and has a post office under Weston-super-Mare; money order and telegraph office, East Brent. Acreage of parish, 2082; population, 420. The manor belonged formerly to Glastonbury Abbey. The living is a rectory in the diocese of Bath and Wells; gross value, £620. The church is Later English, in good condition, and consists of nave, N aisle, and chancel, with porch and tower. There is a Wesleyan chapel.

The register of baptisms and burials dates from the year 1737; marriages, 1773; an earlier register of marriages is said to have been in existence till 1780.

The church of St. Christopher is an ancient building of stone in the Perpendicular style, consisting of chancel, nave of four bays, north aisle, south porch and a fine western tower with a low arcaded parapet, altered in the 19th century, and bold double buttresses, terminating in four massive pinnacles, and containing a clock and 6 bells: on the south window is the date 1633, a record of repairs made at that date: the north aisle, which has a finely carved and moulded roof and a good parapet with pinnacles, appears to have originally been a chapel connected with the adjoining grange, probably used by the monks of Glastonbury as a summer residence; the ceiling is a fine example of Perpendicular timber work: on the north side is a walled-up entrance and a tabernacled niche, and at the east end is a piscina: the nave roof is coved and enriched with good bosses, and below the wall plate are six grotesque heads, perhaps belonging to an earlier roof: the east window is filled with modern stained glass, the west window and the heads of all the others are filled with stained glass, and there is also a memorial east window in the north aisle: the font, a work of the 12th century, with zigzag ornament, is a relic of an earlier church. The church was reseated in carved oak in 1894 at a cost of £965, and now affords sittings for 340 persons. 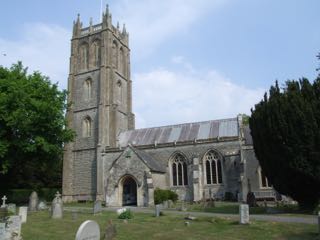 There is a Wesleyan chapel, rebuilt in 1902, and seating about 200 persons.

We have transcribed the entry for Lympsham from the following:

Online maps of Lympsham are available from a number of sites: