Ilminster, a town and a parish in Somerset The town stands on the river Isle, and has a station on the G.W.R., 165 miles from London, and 5 N by E of Chard. It has a post, money order, and telegraph office. Acreage, 4079; population, 3135. It takes its name from the river Isle, and from its own church or minster. It was a place of some importance in the Saxon times. It was at one period more extensive than at present, and it has repeatedly suffered injury by fire. It comprises two long streets, from E to W and from N to S, and contains many good houses. It has two banks, three chief inns, a market-house, a police station, a church, Free, Congregational, Wesleyan, and Unitarian chapels, a grammar school, and it is a seat of petty sessions and a polling-place. The church belonged to Muchelney Abbey, is cruciform and Decorated English, with chantry chapel and pinnacled central tower, and contains brasses and monuments of the Wadhams, one of whom was the founder of Wadham College, Oxford. The grammar school was founded in 1550 by H. Waldron, a native; the income is about £870 yearly; the school was reorganized in 1874, and a new boys' school was built in 1879. Markets are held on Wednesdays and Saturdays; a fair is held on the last Wednesday of Aug.; and brewing, flax-spinning, lace manufacturing, shirt-collar making, and brick-making are carried on. Samwayes the theologian was a native. There are Conservative and Liberal clubs and a reading-room. Dillington House, standing in a beautiful park of 47 acres, is the seat of the Lee family, who are lords of the manor. The living is a royal peculiar in the diocese of Bath and Wells; commuted value, £500 with residence.

A Cemetery of two acres was formed in 1859, about 1 mile from the town, with two mortuary chapels.

The Phillimore transcript of Marriages at Ilminster 1662-1812, Somerset is available to browse online.

The parish register dates from the year 1660. 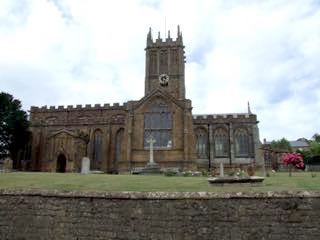 The church of St. Mary is a noble cruciform building of stone in the Early English and Perpendicular styles, consisting of chancel, nave, aisles, transepts, north and south porches and a western tower, with pinnacles, containing a clock and 8 bells: at the west end of the nave is a large new gallery of oak, the front of which is handsomely carved: in the north transept, which forms a lady chapel, is an altar tomb with brasses to Sir William Wadham and his mother (in widow's attire), c. 1440; these include effigies of both under a triple canopy, with embattled entablature, marginal inscription, now mutilated, and eight Latin verses: here also is another altar tomb with brasses to Nicholas Wadham, of Merifield, Somerset, ob. 1609, with effigy in armour, and his widow Dorothy, ob. 1618, also with effigy; these were the founders in 1610 of Wadham College, Oxford: the east and west windows and five others are stained: the chancel was restored in 1883 at the expense of the late V. H. Vaughan-Lee esq.: the reredos, in Beer stone, was the gift of Col. A. V. H. Vaughan-Lee in memory of his father and mother: the church was partly restored in the years 1887-89, at a total cost of £2,388, and further, in 1902, at a cost of £1,500: it now affords sittings for over 600 persons.

The Congregational chapel is a building of stone, erected in 1812, seating 350 persons.

The Wesleyan Methodist chapel at Broadway Hill, built in 1838 and enlarged in 1858, has about 300 sittings.

We have transcribed the entry for Ilminster from the following:

Online maps of Ilminster are available from a number of sites: