Carmarthenshire or Caermarthenshire, a maritime county of South Wales, bounded on the W by Pembrokeshire, on the N by Cardiganshire, on the E by Breconshire, on the SE by Glamorgan, on the S by Carmarthen Bay. It is the largest county in the Principality. Its length, north-eastward, is 53 miles; its greatest breadth, 33 miles; its circuit, about 165 miles; its area, 587,816 acres. A low tract, reclaimed from the sea, lies round Laugharne; another low tract lies along the Towy; a great congeries of hills and uplands fills most of the interior; a range of mountains, striking away to Plynlimmon in Cardiganshire, is in the north; and a loftier range, forming the main part of the Black Mountains or Forest Fawr, culminates in the Carmarthen Van or Beacon (2596 feet), the highest peak of which (2631 feet) is over the border in Breconshire. The chief rivers are the Towy, with the Gwili, the Cothi, the Bran, the Sawdde, and the Cennin; the Taf, with the Gynin and Cywyn; the Teifi, on the boundary with Cardigan; the Llwchwr, on the eastern boundary to the sea; the two Gwendraeths, and the Amman. The Towy has a course of about 50 miles in Carmarthenshire. Several lakes occur, of no great size, yet full of interest either to the angler or to the tourist. Lower Silurian rocks form the northern and the central districts; upper Silurian rocks form narrow belts in the SE; old red sandstone rocks form a considerable belt on the coast, from the western boundary to the east of the Towy, and thence east-north-eastward; and the rocks of the carboniferous series, rich in the coal measures, constituting part of the great coal-field of South Wales, form all the tracts on the SE, both sea-board and inland. Lead ore, copper ore, ironstone, slate, building-stone, fire-stone, and dark blue marble are worked, and there are numerous collieries.

The soils on the higher tracts over all the different kinds of rocks are, for the most part, rather poor, while those in the valleys, especially in the lower parts of those of the Towy and the Taf, are in general very fertile. About one-third of all the land is waste. Peat is the only fuel throughout much of the uplands, and crushed coal, mixed with clay, and formed into balls, is the chief fuel used in the other tracts. The enclosures are chiefly of stone. Oats are the chief grain crop, both for home use and for exportation. Butter and bacon are sent from dairy tracts to market. The cattle are chiefly a small or middle-sized native breed; but in some of the best parts of the valleys are large kinds from other counties. The sheep were formerly small, but have been much improved by crosses with the Southdowns.

A large export trade is carried on in coal, stone, and iron, and some manufactures exist in woollens and leather. The G.W.R. brings Carmarthenshire into communication with England and London, viâ Bristol, the Severn Tunnel, and Swansea. From Carmarthen a branch runs to Llandyssil, and another runs from Llanfalteg Junction to Cardigan. The L. & N.W.R. has a branch from Carmarthen to Llandilo, runs thence jointly with the G.W. to Llandovery, and thence connects with Shrewsbury and Crewe. The Manchester and Milford railway to Aberystwyth is brought into connection with the G.W. system at Pencader, and the Pembroke and Tenby railway connects with the G.W. system at Whitland. Short mineral lines run north from Kidwelly, Pembrey, and Llanelly.

The ancient county is divided for parliamentary purposes into two divisions; it also includes the Carmarthen district of boroughs, consisting of the contributory boroughs of Carmarthen and Llanelly. The administrative county includes the municipal boroughs of Carmarthen, Kidwelly, and Llandovery. It has one court of quarter sessions, and is divided into eight petty sessional divisions. The borough of Carmarthen has a separate commission of the peace and separate court of quarter sessions. The county contains eighty entire civil parishes and part of one other, and seventy-five entire ecclesiastical parishes and districts, and parts of seven others. It is included entirely in the diocese of St David's. The county is governed by a lord-lieutenant, a high sheriff, and a county council consisting of fifty-one councillors and seventeen aldermen. It is in the western military district, and the South Wales judicial circuit. The assizes are held at Carmarthen. Population (1801) 67,317, (1821) 90,239, (1841) 106,326, (1861) 111,796, (1881) 124,864, (1891) 130,566.

The territory now forming Carmarthenshire belonged to the Demetæ or Dyfed; was included in the Roman Britannia Secunda; afterwards formed part of Ceredigion or Dynevor; made very stout resistance to the Normans; gave way to the forces of Edward I.; and was not entirely subdued by England till the commencement of the 16th century. Traces of the early inhabitants still remain in the shape of cromlechs, as at Dolwilynn near Llanboidy, inscribed stones, as the Eidon Stone at Golden Grove. Encampments, Roman stations, and Roman roads may also be traced. Ruins or remains of castles exist at Dynevor, Dryslwyn, Llandovery, Carreg-Cinnen, Carmarthen, Llanstephan, Laugharne, Kid-welly, and Newcastle-Emlyn, and remains of monasteries are at Talley.

The Return of Owners of Land in 1873 for Carmarthenshire is available to browse.

Old map of Carmarthenshire circa 1895 (Gazetteer of England and Wales) 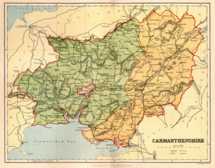