Dulverton, a small town and a parish in Somerset. The town stands on the river Barle, amid an amphitheatre of wooded hills, adjacent to Exmoor, 14 miles W of Wivelis-combe, and has a station on the G.W.R. 179 miles from London. It consists chiefly of two neat streets; has a post, money order, and telegraph office (R.S.O., Somerset), a five-arched bridge, a parish church, a dissenting chapel, a chapel of ease, an endowed school, and a county police station. A cattle market is held at the railway station, which is about 2 miles from the town, on the first Tuesday in each month. Dulverton is also a seat of petty sessions. The church is Early English, with an embattled tower and a corner turret, was restored in 1853, and contains monuments of the Sydenhams. The parish comprises 8741 acres; population, 1265. The manor belonged to the West Saxon kings, was given by Edward I. to the Pynes, and passed to the Babbingtons and the Sydenhams. The scenery is highly picturesque, and an open spot, called Mount Sydenham, in a wood above the town, commands a very magnificent view. The hills and heaths are much frequented by sportsmen. The living is a vicarage in the diocese of Bath and Wells; value, £450 with residence. Patrons, the Dean and Chapter of Wells. 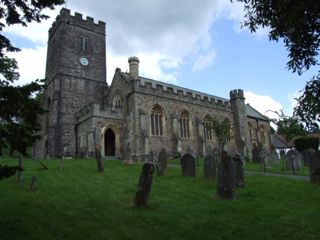 The church of All Saints, which, with the exception of the tower, was rebuilt in 1855, at a cost of £3,200, is a stone building, consisting of chancel, nave, separated from the aisles by arcades of 12 bays, south porch, square western tower with 5 bells and a clock, and has sittings for 750 persons: in 1873-4 a handsome reredos of Bath stone and illuminated plates and an organ, presented by B. M. Collyns esq. were erected, in memory of his deceased parents, and encaustic tiles were laid down in the sacrarium, the gift of J. B. Collyns esq.: the tower was coped with Bath stone, the gift of the Dowager Lady Carnarvon: the pulpit, desk and font were removed to their proper places and a lectern set up: there are five stained windows; the eastern, of five lights, was given in memory of the Beague family in 1864; one to the third Earl of Carnarvon; one to the Dowager Countess of Carnarvon; one to William Trevor: and one to George Hall Peppin; and one has been (1883) erected in memory of the Pearse family.

We have transcribed the entry for Dulverton from the following:

Online maps of Dulverton are available from a number of sites: