Cardiganshire, a maritime county of South Wales, bounded on the west by Cardigan Bay, on the north by Merionethshire, on the north-east by Montgomeryshire, on the east by the counties of Radnor and Brecon, on the south by Carmarthenshire and Pembrokeshire. Its length north-eastward is 45 miles, its greatest breadth is 35 miles, its circumference is about 150 miles, and its area is 440,630 acres. It is the most primitive and the wildest county of South Wales. The coast for the most part is low and rather tame. The interior, except in three valleys, has little level land, includes vast sweeping ranges of hills, and is largely mountainous. The south-western portion may, comparatively speaking, be called low country, while the north-eastern is high, and culminates in Plynlimmon. Some parts contain grand scenery in varieties of the picturesque, but the upland parts generally exhibit a dreary sameness. The river Dyfi or Dovey goes to the sea on the northern boundary, the river Teifi goes to the sea on the southern boundary, and the Rheidol, the Ystwith, the Mynach, the Ayron, the Dothie, the Claerwen, the Elan, the Berwyn, the Gwyrai, the Lery, and other streams water the interior. Lakes are numerous, but none of them are large. Rocks of the lower Silurian series occupy the entire area. Metal mines of high celebrity, yielding great wealth, were worked in the 16th century, were for a long time almost wholly abandoned, and afterwards partially resumed. Lead, zinc, and silver are the chief ores, and copper ore also is found. Slate for roofs and floors is worked.

The soil in much of the valleys is peat or vegetable mould, in the vales among the uplands chiefly stiff clay, with mixture of light loam, on the higher grounds of the lowland tracts generally a light sandy loam, from 4 to 12 inches deep, and on the uplands, for the most part, a coarse, shallow, barren detritus. About one-half of the entire area is waste. Tolerably good farming is practised in the valleys of the Teifi and the Ayron, and in some other parts. Lime is brought from Pembroke, and much used as a manure, but sea-weed and peat-ashes also are much used. Barley and oats are the chief crops, while wheat, rye, pease, beans, potatoes, and turnips also are raised. The arable farms average about 150 acres. Farm buildings have been improved. Butter and pork are produced for the market. The cattle are a small, hardy, black breed ; the sheep also are small, but have begun to be improved by crosses with the Southdowns, the Leicesters, and the Dorsets, and the horses seldom exceed 14 bands in height, but are strong and hardy.

Ancient woods were extensive, but have been nearly all swept away. Oak, ash, and alder are native trees, and some large plantations of larch have been made. The only manufactures of any note are woollens and gloves for local use. The Whitland and Cardigan and the Carmarthen and Cardigan branches of the G.W.R. give facilities to the southeastern and the southern borders, and the Cambrian and the Manchester and Milford railways give facilities to the northern and central districts. Good roads connect the towns, and traverse much of the interior.

The county contains three municipal boroughs, namely, Aberystwyth, Cardigan, and Lampeter. It has one court of 832 quarter sessions, and is divided into nine petty sessional divisions. The boroughs of Aberystwyth and Cardigan have separate commissions of the peace, but no separate courts of quarter sessions. The county contains 97 entire civil parishes and part of one other parish. The county returns one member to the House of Commons. It is governed by a lord-lieutenant, a high sheriff, and a county council consisting of 48 councillors and 16 aldermen. It is in the South Wales judicial circuit and the western military district. The assizes are held at Lampeter. The county is in the diocese of St David's, and, with parts of adjoining counties, forms an archdeaconry. Population in 1801,42,955; in 1821, 57,784; in 1841, 68,766; in 1861, 72,245; in 1881, 70,270; and in 1891, 62,630 ; of the administrative county, 63,467.

The territory now forming Cardiganshire was anciently part of Dimetia. It had an important station of the Romans called Loventium at Llanio, near Trefaron, and was nominally included in their Britannia Secunda. The Danes harassed it in 987 and 1071. The Normans came into it in 1092, but were driven out in 1097. Henry I. granted it to the Strongbows, Henry II. restored it to Prince Rhys, and Edward I. in 1284, on the overthrow of the last Llewelyn, united it to England. Monuments of the ancient inhabitants occur at Yspytty-Cynfyn near Lampeter, Llanarth near Aberayron, and in other places. The Roman road called Sarn-Helen went through Loventium toward Penalt and Carnarvon. Fortifications stood at Cardigan, Aberystwyth, Ystradmeiric, Lampeter, Llanrhysted, Kilcennin, Dinerth, Aberenion, Castell-Gwalter, Castell-Flemish, Moyddyn, Penweddie, Aberayron, and a number of other places. A famous abbey stood at Strata Florida, now Ystrad-Flur, on the Roman Way, and monastic houses stood at Cardigan, Llanrhysted, Lampeter, and Llanewi-Brefi.

The Chapman code for Cardiganshire is CGN.
Chapman codes are used in genealogy as a short data code for administrative areas, such as county and country names.

A transcript of the Cardiganshire Return of Owners of Land in 1873 is online.

The Return of Owners of Land in 1873 for Cardiganshire is available to browse.

Old map of Cardiganshire circa 1895 (Gazetteer of England and Wales) 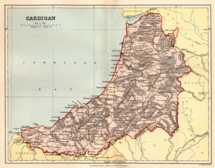