Combe St Nicholas, a village and a parish in Somerset. The village is near Chard, 3 miles NW by N of Chard station on the G.W. and L. & S.W.R., and has a post and money order office under Chard; telegraph office, Chard. It has a fair on the Wednesday after 10 Dec. The parish is divided into the tithings of Betham, Clayhanger, Ham, and Wade-ford, and includes the hamlets of Sticklepath and Weston. Acreage, 4343; population, 1069. There was anciently a nunnery at Weston. The living is a vicarage in the diocese of Bath and Wells; value, £330 with residence Patron, the Bishop of Bath and Wells. The church is Later English, cruciform, and good, and has an embattled tower dating back to 1239. There is a Baptist chapel.

The Phillimore transcript of Marriages at Combe St. Nicholas 1678-1812, Somerset is available to browse online.

The parish registers date from the year 1678.

The church of St. Nicholas is an ancient building of stone in the Perpendicular style, consisting of chancel, nave of five bays, aisles with eastern chapels, north and south porches and a battlemented western tower with pinnacles, containing a clock and 6 bells: the rood screen, once a fine work, has been removed and placed behind the choir stalls: there are stone staircases, formerly leading to the rood loft in small turrets on both sides of the church: in the south chapel and in the chancel are piscinæ, and two hagioscopes remain in the chancel arch: the east window is stained: beneath the belfry are two ancient fonts; one of these, constructed from a solid block of Whitestaunton stone, measures 7 feet 2 inches in circumference and 26 inches in diameter, and is of very early date: there are two ancient monuments, dating respectively from 1644 and 1680: the church was restored in 1863, and affords 500 sittings.

The Wesleyan chapel, on the Taunton road, erected in 1891, is a building of flint and stone in the Perpendicular style, from designs by Mr. R. Curwen A.R.I.B.A. of London, and will seat 170 persons; attached is a school-room, with four classrooms and gallery and a large transeptal room, opened in 1897: the school-room, class-room, transept and chapel can all be thrown into one by the removal of the screens separating them. 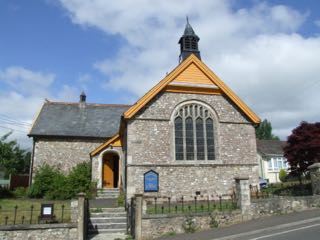 We have transcribed the entry for Combe St Nicholas from the following:

Online maps of Combe St Nicholas are available from a number of sites: