Brushford, a parish in Somersetshire, on the river Exe, 1 mile S of Dulverton station on the G.W.R. Post town, Tiverton; money order and telegraph office, Dulverton. Acreage, 2848; population, 370. The living is a rectory in the diocese of Bath and Wells; net value, £350 with residence. Patron, Earl Carnarvon. The church is good, and was restored in 1887. There are a Wesleyan chapel and an endowed school.

The parish registers date from the first year or Elizabeth (1558). 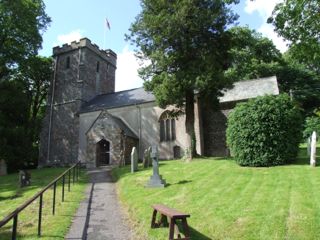 The church of St. Nicholas is an old stone building, in the Late Decorated style, consisting of chancel, nave, south porch and western tower, built apparently in the early part of the fifteenth century: a handsome Decorated screen divides the nave from the chancel: the south windows are good specimens of the Decorated style: the font is very old, apparently of Norman date; it is of Purbeck stone, and square; the pillars on which it once stood are lost: the tower is square, of three stages, built of the grey sandstone of the district; some of the blocks are of great size: there are 5 bells, presented by the Rev. Robert Norris, who was 48 years rector here, and died in 1708: he raised the tower at his own expense to receive the bells.

We have transcribed the entry for Brushford from the following:

Online maps of Brushford are available from a number of sites: