Brecknockshire or Breconshire, an inland county of South Wales. It is bounded on the NW by Cardiganshire, on the N and NE by Radnorshire, on the E by Herefordshire and Monmouthshire, on the S by Monmouthshire and Glamorgan, and on the W by Carmarthenshire. Its outline is not far from being roughly triangular, with the sides toward the NE, the S, and the W. Its length from N to S is 38 miles, its greatest breadth from E to W 32 miles, its circumference about 108 miles, and its area 469,894 acres. The greater part of the surface is mountainous and wild. A region of hills coming in from Cardiganshire occupies most of the NW and the N, to the vicinity of the Yrfon river, culminating in Drygarn, 2120 feet high, and many of them well clothed with wood and heather. A barren chain, called Mynydd-Epynt, commences at the western boundary, 3 miles above Trecastle, and extends north-eastward across the county to Builth, presenting abrupt acclivities to the NW and gradual ones to the SE. A series of mountain masses and ridges, intersected by narrow valleys, occupies all the southern half of the county, culminating successively from W to E in the Talsam Mountain, the Capellante Mountain, the Brecon Beacons (twin peaks), and Pen-y-cader-fawr, respectively 2596, 2382, 2910, 2862, and 2545 feet high, and exhibiting a great variety of form and character. The valleys are larger and more level than in some other parts of Wales, and; together with the slopes of the hills and the skirts of the mountains, give a great aggregate of ground to the plough.

The chief rivers are the Usk, the Wye, and the Yrfon, and the minor ones the Tawe, the Taf, the Cilieri, the Brem, the Yscir, the Hepste, the Mellte, the Honddû, the Cray, the Senni, the Tarell, the Pyryddin, the Llech, and the Dulas. Picturesque falls occur on the Hepste, the Mellte, and the Llech. The chief lake is the Llyn-Safaddau, the largest in South Wales, and the chief others Llyn-y-Fan-fawr and Llyn-y-Carw. Mineral springs are at Builth, Llanwrtyd, and Llangammarch. A large tract in all the NW, to within 5 miles of Builth, consists of lower Silurian rocks. A tract in the N, around Builth, together with two narrow belts thence to the SSW, are upper Silurian. An extensive tract across all the centre of the county, filling more than half of its area, is old red sandstone. A narrow belt along all the southern border of this tract is carboniferous limestone and shale, and some parts intermixed with that belt, and S of it to the boundary, belong to the coal measures, which extend thence into the great coal-field of Monmouthshire and Glamorgan. Limestone is singularly scarce in the Silurian regions. Excellent fireclay is worked at Penderyn. Chert is quarried for hearths and millstones, and pennant stone for roofing. Limestone, coal, and iron are worked in the S. Some lead, copper, and tripoli are found.

The soils are exceedingly various, and range in fertility from the poorest to the richest. That in the best parts of the N is stiff clay loam, that of the vale of Usk a sandy loam, that of the vale of Wye a good, brown, gravelly loam. In 1892 there were 201,675 acres in cultivation, and 199,151 of mountain or heath land. Great improvements have been effected through the exertions of the Brecon Agricultural Society. Field crops are raised in sufficient quantity for home consumption; butter, cheese, timber, wool, and cattle are exported, and some hops and orchard produce are grown, The leases are various, and the farmhouses are better than in most other parts of Wales. The Hereford cattle have generally superseded the old Welsh black breed in the lowlands, and a hardy race of small mountain sheep depasture the uplands.

Leather and coarse woollens are manufactured to a small extent for the English market, and the iron-works in the SE do a large business. The Brecon and Abergavenny Canal assists traffic eastward from the centre of the county. The Brecon and Merthyr railway runs from Brecon to Merthyr Tydfil and Newport; the Neath and Brecon, from Brecon to Neath; the Cambrian has a branch from Moat Lane Junction to Llanidloes, Builth, and Brecon; the Swansea, Brecon, and Hereford branch of the M.R. places Breconshire in communication with Hay and Hereford; and the Craven-Arms, Llandovery, and Swansea branch of the L. & N.W.R. brings. it into connection with Shrewsbury.

The county is divided into the six hundreds of Builth, Crickhowell, Devynnock, Merthyr, Penkelly, and Talgarth, The ancient county is not divided for parliamentary purposes, and contains part of the parliamentary borough of Merthyr Tydfil, 66 entire ecclesiastical parishes and districts, and parts of three others, and is included partly in the diocese of Llandaff and partly in that of St Davids. The administrative county comprises the municipal borough of Brecknock and 89 entire civil parishes, and parts of three others. The county has one court of quarter sessions and is divided into ten petty sessional divisions; the borough of Brecknock has a separata commission of the peace, but no separate court of quarter sessions. The market-towns are Builth, Brecon, Crickhowell, and Hay; and the chief seats are Brecon Priory, Dinas, Buckland, Llangoed Castle, Gwernyfed, Ynyscedwyn, Pen-pont, Pennoyre, and Abercamlais. The county is governed by a lord-lieutenant, a high-sheriff, and a county council consisting of 45 councillors and 15 aldermen. It is in the Western military district, and the South Wales judicial circuit, and it forms an archdeaconry in the diocese of St Davids. The assizes are held at Brecon. One member is sent to Parliament for the county. Population (1801) 32,325, (1821) 43,826, (1841) 55,603, (1861) 61,637, (1871) 59,901, (1881) 57,746, (1891) 57,031; of the administrative county, 51,393.

The Romans gained possession of Brecknockshire after the defeat of Caractacus, and made it part of the province of Britannia Secunda. It was once called Garth-Madryn, and it took its present name from a Welsh prince called Brychan, who lived in the 5th century. Most part of it came under the power of the Normans after the overthrow of Bleddyn, Prince of Brycheiniog, in a great battle in 1088, but parts of it among the mountains maintained resistance two centuries longer, till the fall of Llewelyn. It was long swayed by the fortunes of Brecknock Castle, and was harassed by the predatory attacks of Owen Glendower. The antiquities include a kistvaen at Ty-Illtyd, British camps at Cefn-y-Gaer, Pen-y-Crug, Penmuarth, Alltfillo, Lamhamlwch, and Benni-wood; Roman camps at Caer-Bannau, and Gaer near Cwm-ddu; traces of the Via Julia Montana and of two vicinal roads from Caer-Bannau; remains of castles at Brecknock, Cart-y-Carw, Crickhowell, Penkelly, Builth, Brynllys, Brynllyfn, and Tre'r-twr, several old churches or parts of churches, and some old seats.

The Chapman code for Breconshire is BRE.
Chapman codes are used in genealogy as a short data code for administrative areas, such as county and country names.

A transcript of the Breconshire Return of Owners of Land in 1873 is online.

Old map of Brecknockshire circa 1895 (Gazetteer of England and Wales) 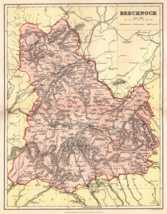