Cumberland, a maritime and border county, bounded on the N by the Solway Firth and Scotland, on the E by Northumberland and Durham, on the SE and S by Westmorland and Lancashire, on the W by the Irish Sea. Its greatest length north-eastward is 80 miles, and its mean length about 60 miles; its greatest breadth south-eastward is 35 miles, its circuit is about 215 miles. Its area is 970,161 acres, of which about 342,000 comprise the mountainous district, and 8000 the lakes and waters. The surface is very much diversified. A range of mountains, commencing in the Crossfell ridge at the boundary with Durham and Wesmorland, extends along all these borders to the boundary with Scotland, and degenerates in many parts, especially toward the N, into wild expanses of heath. A broad tract of low land, at first tumulated, afterwards rich valley, afterwards morass more or less reclaimed, extends parallel with this range along the course of the Eden river, and onward thence to the boundary with Scotland. Another great tract of low land, prevailingly flat, and variously poor and rich, strikes westward from the middle and lower part of the Eden's valley to the Irish Sea, and lines all the shore of the Solway Firth. A great upland tract, with the Skiddaw group of mountains on the N, the Helvellyn group in the centre, and the Scaw Fell group in the S, including many summits from 2000 to 3229 feet high, enclosing numerous picturesque vales, and forming the main part of the famous Lake country, occupies most of the remaining area of the comity, measuring about 39 miles by 17, and gives scenic character to all the rest. The chief rivers are the Eden, the Croglin, the Irthing, the Petteril, the Caldew, the Line, the Esk, the Wampool, the Waver, the Ellen, the Derwent, the Ellen, the South Esk, and the Duddon. Rivulets of picturesque character, many of them with fine waterfalls, are numerous. The chief lakes are Derwent Water, Bassenthwaite, Thirlmere, Lowes, Crummock, Buttermere, Ennerdale, Wastwater, and part of Ulleswater. Picturesque lakelets and mountain tarns also are numerous. The rocks range from granite and trap through slaty formations, both without and with fossils, and through sedimentary deposits of old red sandstone, mountain limestone, millstone grit, and coal, up to new red sandstone. The igneous and the Silurian rocks occupy most of the Lake country, and the newer ones extend thence to the eastern and northern boundaries, the Solway Firth, and the sea. Bare and curious minerals occur in great variety; plumbago, and silver, lead, copper, and iron ores are found; coarse marble, limestone, and building stone are plentiful, and iron and coal are produced in considerable quantities. The native flora is surprisingly rich, and moor game abounds.

The soils are variously strong fertile loam, heavy wet loam, light dry loam, and poor peaty mould. About one-third of the entire area is waste. The crops and culture are much controlled by the character of the soils, but extensively include good rotations. Husbandry in all departments has undergone much recent improvement.

The dairy commands considerable attention, and produces excellent butter. The cattle are variously long horns, short horns, Galloways, and crosses. The sheep are partly Cheviots, partly a black-faced, mixed, hardy breed. Manufactures in cotton, woollens, linens, paper, earthenware, and other matters are carried on. The lines of six railway companies radiate from Carlisle. The L. & N.W.R. and the M.R. run south; the N.E.R. runs eastward to Newcastle; the Caledonian and the North British railways run northwards to Glasgow and Edinburgh; the Glasgow and South-Western runs northwards over the Caledonian track, which it leaves near Gretna; the North British also runs westwards to the Solway Firth; while the Maryport and Carlisle railway runs SW to Maryport. From the latter place, the L. & N.W.R. has a line to White-haven, whence the Furness railway continues southwards along the coast. The Cockermouth, Keswick, and Penrith railway crosses the county from E to W, while inland between Maryport and Whitehaven there is quite a network of lines.

The county contains 206 entire civil parishes and 162 entire ecclesiastical parishes or districts. It is almost entirely in the diocese of Carlisle. It is in the northern circuit, and the assizes and quarter sessions are held at Carlisle. It has 1 court of quarter sessions and 10 petty sessional divisions. The borough of Carlisle has a separate court of quarter sessions and a separate commission of the peace. For parliamentary purposes it is divided into 4 divisions:—Northern, or Eskdale; Mid, or Penrith; Cockermouth; and Western, or Egremont. The parliamentary boroughs are Carlisle and Whitehaven.

Caledonian Celts, coming in from the north, and penetrating to the centre of the Lake country, seem to have been the first inhabitants of Cumberland; and took here the name of Cistuntii or Voluntii. Other Celts came afterwards from Wales, and peopled some of the southern parts of the Lake country. The Romans entered in the second century, overcame the Celts only so far as not to deprive them of their own customs, and annexed their territory to the province of Maxima Cæsariensis. The Celts, after the withdrawal of the Romans, maintained for some time a sturdy independence, and became included in the kingdom of Cumbria. The Angles and the Saxons did not enter in any considerable number till near the end of the seventh century, and entered even then not as invaders, but in the way of stealthiness and conciliation. Danes came soon after the Saxons, but chiefly as fugitives from defeat, were strengthened by a few Norwegians arriving on the seaboard, and eventually acquired so much force as to have greater influence and larger numbers than the Angles and the Saxons. Little intestine commotion occurred, but the peace was broken by the inroads of Athelstane in 937, Edmund I. in 945, Ethelred in 1001, William the Conqueror in 1069, and the Scots in 1135, 1216, 1297, 1311, 1319, 1322, 1327, 1337, 1342, 1380, 1387, 1524, and 1542. Several of the Scottish inroads, particularly under William the Lion, Bruce, and Douglas, were extensive and devastating, but others swept only low tracts near the frontier, and did little harm. The army of the Pretender traversed and retraversed the county in 1745, and was followed, in its retreat, by the royal forces under the Duke of Cumberland. Celtic monuments occur in a great Druidical circle near Keswick, the great Druidical circle called Long Meg and her Daughters, and small circles or standing stones on Black Combe and four other places. Roman relies are found in remains or traces of the Roman wall, Watling Street, and the Maiden Way, and of stations at Netherby, Bewcastle, Old Carlisle, Moresby, Old Penrith, Ellenborough, Papcastle, and three or four other places. Monuments of various ages, from the Celtic to the Scandinavian, occur in numerous small tumuli, called variously how, raise, barrow, and hill. Relics of the Anglo-Saxons and the Danes are found in a few monumental runic stones. Traces of a time of tall strong heroes occur in the contents of cairns and in numerous traditions. Remains of abbeys or other religious houses of ancient date, are at Calder, Wetherall, Lanercost, St Bees, Holme-Cultram, and Bridekirkj castles at Rockcliffe, Naworth, Scaleby, Carlisle, Kirkoswald, Penrith, Cockermouth, Egremont, Castle-Hewin, Sowerby, Millom, High-head, Wulstey, and Dacre; and numerous towers or peel-houses on the Border. Cumberland gave the title of Earl to the ancient family of Clifford; and, since the time of Charles I., has given the title of Duke to some member of the Royal family.

The Chapman code for Cumberland is CUL.
Chapman codes are used in genealogy as a short data code for administrative areas, such as county and country names.

The Historical Directories web site have a number of directories relating to Cumberland online for the period 1833-1915, including:
Kelly's, Pigot, Slater, Harrod.

We have transcribed the entry for Cumberland from the following:

A listing of the Hundreds and Wards in Cumberland, with the parishes contained in them.

The Return of Owners of Land in 1873 for Cumberland is available to browse.

Old map of Cumberland circa 1895 (Gazetteer of England and Wales)

A listing of the Poor Law Unions in Cumberland, with the parishes contained in them.

The Visitation of Cumberland, 1615, is available to browse from the Heraldry page. 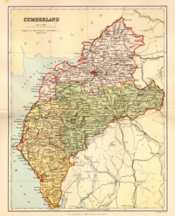