Anglesey or Anglesea, an insulated county of North Wales. It is separated on the SE, by the Menai Strait, from Carnarvonshire, and is surrounded elsewhere by the Irish Sea. It consists chiefly of the island of Anglesey, but includes also the island of Holyhead and the islets of Skerries, Priestholm (or Puffin), and Llanddwyn, with some others. Its length south-eastward is 20 miles; its breadth south-westward, 17 miles; its circumference, 76 miles; its area, 175,836 acres. Its outline is indented by several considerable bays. The coast is very rocky, and presents some fine scenery in the north and west; but in the south is partly desolated with sand. The general surface is uninteresting, not much diversified with hill and dale, and quite devoid of lofty mountains or deep glens, flat in the S and in the centre, and rising into only moderate hills in the N. The climate is mild, but foggy. Geologically Anglesey is important from the presence of extensive formations of pre-Cambrian rocks. Mona marble, a beautiful green rock quarried near Holyhead, is a variety of serpentine. Some coal exists, but of most uncertain character—sometimes in alluvial boulders of a ton or upwards. The coal-field stretches for about 9 miles, from near Gaerwen to Malldraeth Bay, and there is a small patch opposite Carnarvon; it is but little worked. Peat fuel is obtained in inexhaustible plenty. Gritstone, limestone, coloured marble, lead ore, and copper ore are worked; and serpentine, soapstone, fuller's earth, potter's clay, magnesia, calamine, sulphur, alum, silver, and zinc are found. Much of the land is pastoral and un-enclosed. The arable soils are chiefly a sandy loam, a stiff reddish earth, and a blackish vegetable mould; all fairly fertile, and receiving improvement by means of shell sand from various parts of the shore. Wood occurs along the banks of the Menai, but is elsewhere scarce. The enclosures are not quickset hedges, but stone or turf walls; and they combine with the bleakness of the surface to render the general aspect tame and cold. Oats, barley, rye, and potatoes are the chief crops. The black cattle are of the kind called runts, and are much esteemed for the flavour and tenderness of their flesh. The native sheep are the largest breed in North Wales. Not a few sheep also of the mountain districts are sent hither to fatten.

The chief streams are the Braint, the Cefni, and the Alaw, but all are small. Numerous kinds of fish, some of them not common in other parts, are plentiful along the coast. Shellfish also abound. Coarse woollen fabrics, for home use, are manufactured. The main road to Holyhead runs through Anglesey, crossing the Menai Strait near Bangor, by a magnificent suspension bridge, erected by Telford, in 1826, with a headway for ships of 100 feet. The Chester and Holyhead section of the L. & N.W.R. goes through the southern part of the county, from the Britannia Bridge to Holyhead; and the Anglesey Central branch goes from a junction at Gaerwen northward to Amlwch.

The towns and chief villages are Beaumaris, Amlwch, Llangefni, Holyhead, Llanerchymedd, Newborough, and Aberffraw. The ports are Beaumaris, Amlwch, and Holyhead. The county council consists of 56 members, of whom 14 are aldermen. The administrative county of Anglesey is coextensive with the ancient or geographical county, which is not divided for parliamentary purposes, and contains no parliamentary borough. The county contains only one municipal borough—namely, Beaumaris. It has one court of quarter sessions, is divided into two petty sessional divisions, and contains 76 civil parishes. The ancient county contains 44 ecclesiastical parishes and districts, and is included entirely in the diocese of Bangor. Anglesey is in the North Wales circuit and the Western military district. It sends one member to Parliament. Population of the county, (1801) 33,806, (1821) 45.063, (1841) 50,891, (1861) 54,609, (1881) 51,416, (1891) 50,098.

Anglesey was called by the ancient natives Ynys Fon, or Mon, signifying "remote," and by the Romans Mona. Its present name was given by the Saxons, and signifies "the Englishman's island." This is generally believed to have been the chief seat of the Druids. In A.D. 61 Anglesey was invaded by the Romans under Suetonius Panlinus, who cut down the groves ("sævis superstitionibus sacri") and suppressed the order of Druids. Their complete extirpation, however, was not effected till some years after by Julius Agricola. From that period Anglesey remained under the dominion of the Romans till they withdrew from Britain. A sovereignty was established here in 450 by Caswallon Llawhir, a British prince, who was sent hither to expel invaders. Aberffraw was the royal residence, and Cadwallader, the last king of the Britons, is said to have been a descendant of this family. In the reign of William Rufus, Hugh, Earl of Chester, and Hugh, Earl of Shrewsbury, are said to have assisted the inhabitants to repel an invasion of Griffith-ap-Conen, Prince of Wales, and about the same time the island was invaded by Magnus, King of Norway. From this period it became a part of the kingdom of Wales, and was even regarded as the seat of government, till the final extinction of Welsh independence by Edward I. After the subjugation of the island by that king, he built a castle at Beaumaris to intimidate the inhabitants, and fortified the town with a wall. Anglesey was afterwards incorporated with England, and in the reign of Henry VIII. was constituted a county. The chief antiquities are eight or nine standing cromlechs, remains or memorials of about twenty other cromlechs, several carneddau (cairns), barrows and camps, the castle of Edward I. at Beaumaris, a priory and cross at Penmon, and a number of churches of the 14th and 15th centuries. Anglesey gives the title of Marquis to the family of Paget.

The Chapman code for Anglesey is AGY.
Chapman codes are used in genealogy as a short data code for administrative areas, such as county and country names.

A transcript of the Anglesey Return of Owners of Land in 1873 is online. 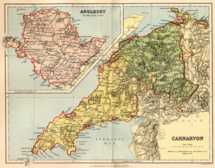