Cornwall, a maritime county in the extreme south-west of England, bounded on the north-east by Devonshire, on all other sides by the sea. It is divided from Devonshire chiefly by the river Tamar, and washed along the north-west coast by the Bristol Channel, along the south-east coast by the English Channel. Its form is cornute or horn-shaped, extending south-westward from a base at the boundary with Devonshire to a point at Lands-End. Its breadth at the boundary with Devonshire is about 45 miles; its average breadth over the 17 miles next Lands-End is about 5 1/2 miles; its average breadth elsewhere is about 20 miles; its length from the middle of the boundary with Devonshire, along the centre to Lands-End is about 80 miles; its circuit, including sinuosities, is about 265 miles; and its area, which includes some near islets and the Scilly Islands, is 868,208 acres. A ridge of bare rugged hills, with one summit 1368 feet in height, and several others nearly as high, extends along all the centre; bleak moors lie among the hills and spread down from their sides; mounds of drifted sand, in some instances several hundred feet high, occupy considerable space along the north-west coast, and only very fertile valleys and bottoms, together with pieces of exceedingly romantic scenery, redeem the entire county from one general aspect of dreariness and desert. The chief rivers are the Tamar, the Lynher, the Looe, the Fowey, the Camel, and the Fal. Rocks of millstone grit form a tract in the extreme north, toward the boundary with Devonshire; rocks of carboniferous limestone and shale form a belt immediately south of that tract; rocks of old red sandstone form the greater part of the county, all southward and south-westward of that belt; rocks of granite and intrusive felspathic trap form four large tracts and many small ones amid the old red sandstone region or contiguous to it; and rocks of greenstone, basalt, and other traps, with serpentine, form a considerable tract around, the Lizard. Tin and copper ores are worked in a large number of mines. The annual output of the former is over 9000 tons, which is very nearly the entire production of the United Kingdom, and of the latter about 200 tons. The next mineral products in point of importance are china clay and china stone, of which the annual output is upwards of 400,000 tons, and arsenic, the output of which is between 3000 and 4000 tons. Antimony, lead, iron, ochre, wolfram, zinc, slate, and building-stone are also worked, and cobalt, bismuth, and many other minerals are found.

The soils are generally light, often largely mixed with gravel, yet show considerable variety, and range from sterility on the moors to fertility in the valleys, and they may be 'classified, into three kinds—the gritty and black, the shelvy and slaty, and the clayey and reddish. About 115,000 acres are waste, and the rest of the area is variously pasture, meadow, and arable land. Much moisture, both in frequent mists and frequent rains, characterises the climate; but this is favourable to agriculture, in consequence of the lightness of the soils, especially as few days pass without alternations of sunshine, and there is not a much greater aggregate of water throughout the year than in most other English counties. Agriculture has undergone great improvement, yet, being secondary here to mining, is not so improved as amongst most entirely agricultural populations, Lime, shellsand, sea-weed and pilchards are largely used as manures.

Wheat, barley, and potatoes give good yield, and hops have been tried. Cattle and sheep are chiefly a cross between native breeds and the breeds of Devonshire, goats abound, and mules are reared for walking the bills. Extensive fisheries of various kinds are carried on, and about 20,000 hogsheads of pilchards, chiefly for exportation, are annually obtained. A great commerce exists in the export of minerals, and in the import of articles required for the mines and the fisheries. The chief railway communication is divided into sections called the Cornwall and West Cornwall railways, but worked by the Great Western Railway Company. The Cornwall railway enters the county at Saltash by the Royal Albert Bridge across the Tamar, the principal stations being Liskeard, Bodmin, Lostwithiel, St Austell, Truro, and Falmouth The West Cornwall railway branches off a short distance south of Truro to Chacewater, Redruth, Camborne, and Penzance, with branches to Helston and St Ives. The other lines carrying passengers are a branch from Plymouth of the G.W.R. through Tavistock, running almost entirely in Devonshire to Launceston, and a short line from Bodmin to Wadebridge, which forms a stepping stone to the extensive "invasion" which the L. & S.W.R. is making in North-east Cornwall. It enters the county at Launceston, and is planned to run by Tresmeer - Camelford and Wadebridge to Padstow, the Tresmeer-Camelford section having been opened in 1893. The Cornwall Minerals railway, also carrying passengers, and worked by the G.W.R., crosses the county from New-quay on the north-west coast to Par and Fowey in the south, and is connected with the Cornwall railway at St Blazey. There is a direct line from Moorswater to Looe, and there are also smaller mineral lines. Canals go from Bude to Launceston, and from St Cleer and Liskeard to St Looe, Main lines of road traverse the county lengthways, and connecting lines go across the moors.

The county formerly returned four members to Parliament in two divisions, but under the Redistribution of Seats Act, 1885, it now returns a member for each of the following six divisions;—Western or St Ives, North-Western or Camborne, Truro, Mid or St Austell, South-Eastern or Bodmin, and the North-Eastern or Launceston division. The borough representation is confined to Penryn and Falmouth, which jointly return one member. The towns, or what rank as such, are exceedingly numerous, and about twenty-eight are market-towns, but some of these, and most of the others, are merely small villages. Some of the seats are Mount Edgecumbe, Godolphin, Port Elliot, Werrington, Tregothnan, Trefusis, Tehidy, Glynn, Pencarrow, Trelawney, Carclew, Haldon, Prideaux, Trengwainton, Trelowarren, Trewinnard, Whitford, Boskenna, Carhayes, Carynes, Harlyn, Helston, Heligan, Harewood, Coldrinnick, Clowance, Menabilly, Pendarves, Llanhydrock, Morval, Penrose, Restormel, St Minver, Pentilly, Tregehan, Trelaske, Treneere, Trewarthenick, and Trewithian The metalliferous territories of Cornwall and Dartmoor were constituted by Edward III. a peculiar appanage of the eldest son of the English monarch, under the name of the Duchy of Cornwall. The revenue from them arose mainly out of tin dues till 1838, and was then commuted into a tax on the net annual produce as averaged over ten years.

Cornwall was the Cassiterides or "tin islands" of the Phoenicians and the Greeks. It was inhabited previous to the Roman conquest by the Carnubii, the Cimbri, and the Damnonii, was included by the Romans in their province of Britannia Prima, became with Dartmoor in 446 a separate kingdom under Vortigern, was overrun by the Saxons under Egbert in 813, under Alfred in 892, under Athelstane in 927, was annexed by Athelstane in 938 to the kingdom of Wessex, was ravaged by the Danes in 977-81, assumed more fixity and quietness under the English crown than most other counties, prior to its erection into a duchy in 1333, has ever since maintained the same quiet character, and was the last scene of triumphant display by Charles and his cavaliers. The language of its ancient people was a variety of the Celtic, akin to the Welsh, the Gaelic, and the Breton, was used in the pulpit so late as 1678, continued till a few generations ago to be generally spoken, and has left traces in the speech of the present inhabitants. The title of Earl of Cornwall was held by Robert de Mortain who came from Normandy with the Conqueror, by Reginald de Dunstanville, by John Plantagenet, by Richard Fitz-Count, by Richard, King of the Romans, and by John of Eltham, and that of Duke of Cornwall was created for the Black Prince, and has ever since belonged to the eldest son of the British sovereign. Ancient British antiquities of great variety, some of them Druidical, and many highly interesting, are very numerous. Castles which belonged to the old Earls are at Launcester, Lostwithiel, Trematon, and Restormel, and other castles of the middle ages are at Pengerswick, St Michael's Mount, and many other places. Twenty monasteries, a preceptory of the Knights-Hospitallers, eleven colleges, and seven hospitals were in Cornwall before the Reformation, but the only monastic remains of any note are at St Germains, Rialton, and St Roche. Interesting ancient churches are at Probus, Truro, Bodmin, St Neots, St Germains, and Duloe.

The Chapman code for Cornwall is CON.
Chapman codes are used in genealogy as a short data code for administrative areas, such as county and country names.

The Historical Directories web site have a number of directories relating to Cornwall online for the period 1833-1915, including:
Kelly's, Pigot, Slater, Harrod.

We have transcribed the entry for Cornwall from the following:

A listing of the Hundreds in Cornwall, with the parishes contained in them.

Old map of Cornwall circa 1895 (Gazetteer of England and Wales)

A listing of the Poor Law Unions in Cornwall, with the parishes contained in them. 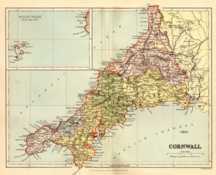