Cheshire, a maritime county, bounded on the NW by the Irish Sea, on the N by Lancashire, on the NE by Yorkshire, on the E by Derbyshire, on the SE by Staffordshire, on the S by Salop, and on the SW by North Wales. Its outline has two projections, north-westward between the estuaries of the Mersey and the Dee, forming the Wirral Peninsula, and north-eastward to Yorkshire, forming the district known as Longendale, but is otherwise nearly oval Its greatest length north-eastward is 58 miles, its greatest breadth 36 miles, its mean breadth about 18 miles, its circuit about 200 miles, its area 657,068 acres. A ridge of hills, subordinate to the Derby and Yorkshire mountains, extends along all the eastern border; another ridge, much broken, crosses the west centre northward from Malpas to Frodsham. A remarkable isolated rocky eminence, about 366 feet high, is in the line of the latter ridge at Beeston. A chain of high ground goes through the Wirral Peninsula, and a few other eminences occur near Macclesfield and toward Salop. The rest of the surface, comprising about four-fifths of the entire area, is remarkable for flatness, and has a mean elevation of probably not more than 150 feet above the level of the sea. The chief rivers are the Mersey, the Dee, the Weaver, the Dane, the Bollin, the Tame, the Goyt, the Peover, and the Wheelock. Lakes bearing the name of meres are numerous and pretty enough to give feature to some landscapes, but are all small. Rocks of millstone grit occur along the eastern border, and fill the extremity of the north-eastern projection; rocks of the coal measures, rich in coal, form a broad band immediately west of the millstone grit; rocks of hunter sandstone occupy a great tract westward of the coal measures, and a still greater one from the vicinity of Malpas, Tattenhall, and Frodsham all westward to the sea; and rocks of the keuper marl and sandstone occupy most of the country between these two tracts, and occur to some extent near the extremity of the north-western peninsula. There occur ores of copper, cobalt, manganese, carbonate of lead, galena barytes, and oxide of iron, but not in sufficient amount to be profitably worked. Bed sandstone for building is extensively quarried at Runcorn, Manley, Great Bebbington, and other places, and limestone and millstone are found at Mole-Cop Mountain. Coal is worked to the amount of over 600,000 tons per annum. Salt abounds in strata and in springs near Northwich, Nantwich, Winsford, and Middlewich, and constitutes the most important mineral product of Cheshire, The annual production of salt in Cheshire amounts to more than 1,400,000 tons, while the production of all the rest of England scarcely amounts to 500,000 tons. Only a small proportion of the output is quarried as rock-salt, over 1,300,000 tons being obtained from brines produced naturally or artificially by flooding the salt-bearing strata with water, and thus dissolving out the salt, which is recovered by evaporating the liquid in pans.

The soil in some parts is a light sandy earth, in other parts a dark peat mould, hut in most parts a rich reddish loam, variously sandy and clayey. The sub-soil in general is either clay or marl, and has to a vast extent afforded material for the improving of the soil. About 64,000 acres are water and sea-sand; about 17,000 are bog and morass; about 28,000 are heaths, commons, and woods, and the rest of the area is variously building site, pleasure ground, park, pasture, meadow, and arable land. Most of the land is under grass, dairy-farming being the most common. Wheat is not much cultivated.

Cheese is a main produce, and Is exported to all parts of England and to the Continent. Butter also is made in considerable quantity. Much attention has been paid to the breed of cows. Market-gardening is carried on to a large extent in the vicinity of large towns. The chief manufactures are muslins, calicoes, fustians, tapes, silks, thread, leather, gloves, and hose, and have their seats principally at Stockport, Macclesfield, Congleton, and Sandbach. Railways intersect the county in all parts and in all directions. The chief belong to the systems of the L. & N.W.R.,, the G.W.R., the M.R., the Cheshire lines, the M.S. &L.E,, the North Staffordshire railway, the Wirral railway, and the Wrexham Mold and Connah's Quay railway. The chief canals are the Manchester Ship Canal, the Trent and Mersey, the Ellesmere, the Chester, the Macclesfield, the Shropshire Union, and the Peak Forest

The county is situated in the diocese of Chester, excepting parts of the parishes of Mottram, Threapwood, and Whitchurch It has one court of quarter sessions, and is divided into fourteen petty sessional divisions. The boroughs of Congleton, Crewe, Macclesfield, Stalybridge, and Stockport have separate commissions of the peace, and the county boroughs of Birkenhead and Chester (city) have both separate commissions of the peace and separate courts of quarter sessions. The administrative county contains 463 civil parishes, and the county boroughs of Birkenhead, Chester, and Stockport four, one, and one respectively; there are besides three parishes which are situated partly in the county and partly in the county boroughs, and seven which are situated partly in other administrative counties. Under the Redistribution of Seats Act of 1885 it is divided for the purposes of parliamentary representation into eight divisions, each returning a member—Altrincham, Crewe, Eddisbury, Hyde, Knutsford, Macclesfield, Northwich, and Wirral. It also includes the parliamentary borough of Birkenhead, and parts of the boroughs of Ashton-under-Lyne, Chester, Stalybridge, Stockport, and Warrington, of which Stockport returns two members, and the others one each. The municipal boroughs are Chester, Birkenhead, Stockport, Macclesfield, Congleton, Stalybridge, Crewe, and Hyde; other towns are Runcorn, Altrincham, Wilmslow, Knutsford, Nantwich, Lymm, Sandbach, Over, Tarporley, Frodsham, Middlewich, Northwich, Winsford, and Audlem. The chief seats are Cholmondeley Castle, Eaton Hall, Dunham-Massey, Combermere Abbey, Crewe Hall, Tabley Hall, Vale-Royal Abbey, Poynton, Alderley, Hooton, Oulton, Norton Priory, Over-Peover, Arley Hall, Aston Hall, Adlington, Peckforton Castle, Brereton, Bromborough, Bramhall, Dukinfield, Capesthorne, Hyde, Lyme, Marbury, Marple, Tatton, Rode, Mere, Somerford, Toft, Wythenshaw, Upton, and Somerford-Booths, Population (1801) 192,305, (1821) 270,098, (1841) 395,660, (1861) 505,428, (1881) 644,037, (1891) 730,058. Population of administrative county, 743,869.

The county is in the North Wales judicial circuit. The assizes and quarter sessions are held at Chester. Under the Local Government Act of 1888 the county, excluding Chester, Birkenhead, and Stockport, is an administrative county governed by a county council consisting of 19 aldermen and 58 councillors. Chester, Birkenhead, and Stockport form administrative counties in themselves. Chester is the headquarters of the North-Western military district.

The territory now forming Cheshire belonged anciently to the British Cornavii, and was included by the Romans first in their Britannia-Superior, next in their Flavia-Cæsariensis. It was overrun in 607 by Ethelfrith; annexed to Mercia In 828 by Egbert; made an earldom under Leofric by Canute; constituted a palatinate under Hugh Lupus by the Conqueror; annexed to the Crown in 1265 by Henry III.; made a principality by Richard II.; constituted again a palatinate by Henry IV.; and governed thence, under the king's eldest sons as Earls of Chester, by a separate and independent jurisdiction. The privileges of the palatinate were greatly curtailed by Henry VIII., and ceased altogether in 1830. The county is crossed by the Via Devana and Watling Street, and has British and Saxon remains at Prestbury, ancient castles at Halton and Beeston, old timber houses at Bramhall, Garden, Moreton, Dukinfield, and Baguley, monastic remains at Birkenhead and Vale Royal, and curious ancient churches at Prestbury and Mottram.

The Chapman code for Cheshire is CHS.
Chapman codes are used in genealogy as a short data code for administrative areas, such as county and country names.

Transcript of the description of Cheshire from Pigot & Co. directory of Cheshire, 1828-9

The Historical Directories web site have a number of directories relating to Cheshire online for the period 1833-1915, including:
Kelly's, Pigot, Slater, Harrod.

We have transcribed the entry for Cheshire from the following:

A listing of the Hundreds in Cheshire, with the parishes contained in them.

The Return of Owners of Land in 1873 for Cheshire is available to browse.

Old map of Cheshire circa 1895 (Gazetteer of England and Wales)

A listing of the Poor Law Unions in Cheshire, with the parishes contained in them.

The population of Cheshire largely increased during the 19th century; the following table shows the numbers at each census:-

The Visitation of Cheshire, 1580 is available on the Heraldry page. 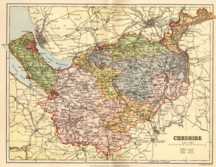