Cambridgeshire, an inland county, bounded on the NW by Northampton, on the N by Lincoln, on the E by Norfolk and Suffolk, on the S by Essex and Herts, and on the W by Beds and Huntingdon. Its greatest length, from N to S, is about 50 miles, its greatest breadth about 30 miles, its circumference about 138miles, and its area 549,565 acres. The surface throughout the N is mostly low, level fenland, intersected by canals and ditches, and even elsewhere consists mainly of low flat tracts, diversified only by hillocks, Orwell Hill, about 300 feet high, and the bleak, bare range of the Gogmagog Hills. The chief rivers are the Ouse, the Cam, the Lark, and the Nene. Alluvial and dilluvial deposits form the fen tracts throughout the N, chalk rocks form the tracts throughout the S, and middle oolite, lower greensand, and upper greensand rocks form small tracts along the Cam. Clunch appears about Burwell, and is the material of Ely Cathedral; blue clay or gault abounds about Ely, and is used there for white bricks and earthenware; and Portland oolite appears in parts farther N.

The soil is very diversified, and generally fertile. That of much of the fens is a very rich vegetable mould, that of the fens about Wisbech is a good loam, that of other parts of the fens is a strong black earth incumbent on gravel, that of the chalk tracts is variously clay, loam, chalk, and gravel, and that of the highest and poorest parts of these tracts is so thin and incohesive as to be unsuitable for tillage. About one-third of the entire area is fenny, and the rest is variously arable, meadow, and pasture. The farms, for the most part, are small. The fens, in their several parts and different conditions, yield variously turf-fuel, hay, green crops, hemp, flax, and rich crops of corn. Other arable tracts yield excellent wheat, beans, turnips, and sainfoin. Dairy lands about the centre are famous for butter, and about Cottenham and Soham for cream cheese, though the production of the latter has been much diminished of late years. The heath-lands are depastured by short-woolled sheep, the fen pastures by long-woolled sheep, and the tracts of different kinds maintain great numbers of cattle, draught horses, pigeons, and wild fowl. The produce of the county consists for the most part of corn, cattle, sheep, butter, hay, fruit, cabbages, beans, potatoes, carrots, mangold-wurzel, cole-seed, asparagus (from Ely), osiers, and reeds for thatching.

The county is not remarkable for manufactures, but brewing, malting, and milling are carried on to a considerable extent Other industries are potteries, brickmaking, lime burning, coprolite digging and working, basket and mat making, and boat and barge building. There are works for the making of paper and parchment, and printing is an important occupation at Cambridge, The Downs, near Newmarket, are used for the training of racehorses. Cambridgeshire is well provided with means of locomotion. Numerous canals intersect the fen tracts, all cut originally for the purpose of drainage, but a number of them serving also for navigation, and a canal called the London and Cambridge Junction connects the Cam with the Stort, and through that with the Lea and the Thames. Railways, belonging chiefly to the G.E. and G.N. systems, though the Midland and L. & N.W. are also represented, intersect all parts of the county. One comes in near Linton, and goes north-north-eastward, past Brinkley and Newmarket toward Bury St Edmunds; another entering at Great Chesterford on the north border of Essex goes northward to Cambridge, and thence north-north-eastward past Ely toward Lynn, another comes in at Royston, and goes north-north-eastward to Cambridge, another comes in from Bedford, and goes north-eastward to Cambridge; another goes from Cambridge eastward to the first at Brinkley; another goes from Cambridge north-westward towards St Ives and Huntingdon; another, connecting with the last at St Ives, goes east-north-eastward past Ely toward Brandon; another, also connecting at St Ives, and going north-north-eastward, passes March and proceeds to Wisbech; and another goes from Ely north-westward to March. Northward a line crosses from Thorney to Wisbech, another passes from March to Spalding, and there is a line also from March through Whittlesea to Peterborough.

There are two separate jurisdictions in Cambridgeshire, (1) the shire proper, and (2) the Isle of Ely. The county town of the shire proper is Cambridge, and here the assizes and quarter sessions are held. The Isle of Ely has a separate custos rotulorum, a bailiff who acts as sheriff, a deputy-bailiff, and two coroners. The spring assizes and April and October sessions are held at Ely; the summer assizes and January and July sessions are held at Wisbech. The University of Cambridge has separate jurisdiction over its own members. The ancient county contains 181 ecclesiastical parishes or districts with parts of 12 others, most of which are in the diocese of Ely. There are in the county 172 civil parishes and part of 4 others. It is divided into the hundreds of Armingford, Chesterton, Cheveley, Chilford, Fiendish, Longstow, North-stow, Papworth, Radfield, Staine, Staploe, Thriplow, Wetherley, Whitlesford, Ely, Wisbech, North Witchford and South Witchford, the liberty of Whittlesey and Thorney, and the boroughs of Cambridge and Wisbech The northern section of it forms the Isle of Ely, and contains the hundreds of Ely, Wisbech, and Witchford, the liberty of Whittlesey and Thorney, and the borough of Wisbech. The chief seats are Cheveley Park, Whimpole Hall, Bourne House, Madingley Park, Gogmagog Hill, Abington Hall, Wratting Park, Croxton Park, Chippingham Park, Babraham, Papworth, Fordham Abbey, Fulbourne House, Horseheath Lodge, Stetchworth House, Shudy Camps Park, Sawston Hall, Milton, and Swaffham.

The county is governed magisterially by a lord-lieutenant, a high sheriff, a deputy lieutenant, and magistrates. Under the Local. Government Act, 1888, Cambridgeshire became an administrative county governed by a county council, consisting of 48 councillors; 14 of the latter are returned by the borough of Cambridge. The division and administrative county of the Isle of Ely is governed magisterially by a custos rotulorum, deputy lieutenants, and magistrates. It has also its own county council, consisting of 14 aldermen and 42 councillors, six of whom arc returned from Wisbech. It formerly returned three members to Parliament for the undivided county, but by the Redistribution of Seats Act, 1885, it now returns the same number in three divisions, viz,, North or Wisbech, West or Chesterton, and East or Newmarket. The University of Cambridge also sends two members to Parliament. There are two courts of quarter sessions, one tor the shire proper and one for the Isle of Ely, and is divided into (ten petty sessional divisions, six for the shire and four for the Isle. The borough of Cambridge has a separate commission of the peace, court of quarter sessions, and its own police; the burgh of Wisbech has a separate commission of the peace only.

The territory now forming Cambridgeshire belonged first to the Iberians, and afterwards to the Iceni. It became part of the Roman province of FIavia Cæsariensis, and subsequently was included mainly in East Anglia and partly in Mercia. The Danes overran it in 870, held it in subjection during 50 years, were driven from it in 921 by Edward the Elder, and again overran it in 1010. The Isle of Ely was a separate jurisdiction under the name of South Girwa, and the rest of the county took the name of Grentebrigescire or Grantbridgeshire. The Isle of Ely made resistance to William the Conqueror, and held out against him till 1074. The county in general, and the Isle of Ely in particular, suffered severely during the civil wars in the times of Stephen, John, and Henry III., and they stood strongly for the Parliament in the wars of Charles I. Icknield Street went along the southern border, passed Boyston and Hixton, toward Newmarket. Ermine Street went across the south-west, north-north-westward, from Royston toward Godmanchester. The Via Devana went across the south centre, north-westward from the vicinity of Linton, past Cambridge toward Godmanchester. The Devil's Ditch goes across the south-east, a little west of Burwell. Traces of British earthworks occur at the Devil's Ditch and at Fleam Dyke. Roman coins, urns, and other remains have been found at Cambridge, Ely, March, Soham, Chatteris, Wilney, the Gogmagog Hills, and other places. Remains of abbeys and priories occur at Thorney, Denny, Cambridge, Isleham, and Barham. Saxon or Norman bits of architecture occur in Ely Cathedral and in Duxford, Stuntney, Ickleton, and other churches. Nine castles of note stood at different places; but all, except the gateway of one at Cambridge, have disappeared.

The Chapman code for Cambridgeshire is CAM.
Chapman codes are used in genealogy as a short data code for administrative areas, such as county and country names.

The Historical Directories web site have a number of directories relating to Cambridgeshire online for the period 1833-1915, including:
Kelly's, Pigot, Slater, Harrod.

We have transcribed the entry for Cambridgeshire from the following:

A listing of the Hundreds in Cambridgeshire, with the parishes contained in them.

The Return of Owners of Land in 1873 for Cambridgeshire is available to browse.

Old map of Cambridgeshire circa 1895 (Gazetteer of England and Wales)

A listing of the Poor Law Unions in Cambridgeshire, with the parishes contained in them.

The Visitation of Cambridge, 1575 and 1619 is available on Heraldry page. 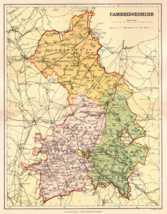