Yorkshire, a maritime county in the N of England, much the largest of the English counties, nearly as large as Wales, and exceeds considerably the combined areas of the two next largest counties, Lincolnshire and Devonshire. It is bounded on the NW by Westmorland, on the N by Durham, on the NE and the E by the North Sea, on the S by Lincolnshire, Notts, and Derbyshire, on the SW by Cheshire, and on the W by Lancashire. Its boundary with Durham is the river Tees, with most of Lincolnshire the river Hnmber, and with most of Lancashire and Westmorland a lofty mountain watershed. Its outline is that of an irregular quadrangle. Its greatest length from E to W is about 120 miles, its greatest breadth from N to S is 90 miles, its circuit is about 400 miles, of which 120 are coast, and its area is 3,882,848 acres. The NE coast, from the Tees to FIamborough Head, is rocky and bold, rising into cliffs of various altitudes up to 800 feet. The interior thence westward to a great central vale extending southward from the Tees to the head of the Humber, is partly tableau, a series of vales, successive ranges of hills, and a great aggregate of elevated moorland. The E coast, all southward from the vicinity of Flamborough Head, is low and flat, and very much of it has suffered considerable denudation by the sea. The interior thence westward, to the width of from 10 to 20 miles, continues to be low and flat, and it then rises into a broad long range of wolds, extending southward to the vicinity of the Humber, and separating the low eastern tract from the great central valley. The W half of the county is exceedingly diversified; forms onward to Leyburn, Otley, Bradford, and Sheffield a rich diversity of vales, rising-grounds, and hills; exhibits thence to the W boundary increasing boldness of feature, with massive mountains and soaring summits; and possesses a great deal of highly picturesque scenery. A considerable section in the NW ranks with the Lake region of Westmorland and Cumberland in attractions of mingled beauty, romance, and sublimity, and the highest mountains there rise to altitudes of from 2300 to 2600 feet above sea-level.

Lower oolite rocks, variously inferior oolite, Bath oolite, forest marble, and corn-brash, form a great tract in the NE contiguous to the lias, and from within a few miles of Northallerton eastward to the sea. Middle oolite rocks, variously Oxford Clay, Coral Bag, and calcareous grit, form a tract immediately S of the lower oolite, from the vicinity of Boltby to the sea. Upper oolite rocks, variously Kimmeridge Clay and Portland limestone and sandstone, form a smaller tract immediately S of the middle oolite, from the vicinity of Helmsley, along the valley of the Derwent, and eastward to Filey Bay. Upper greensand and gault rocks form a narrow belt along all the N and W sides of the wolds. Chalk rocks form all the wolds themselves, and go to the sea at Flamborough Head, and to the Humber between North Ferriby and Hull. Deposits of sand, gravel, and clay, chiefly alluvial, from river or from lake, form all the low flat tract in the SE. The coal measures, viewed in their extension into Derbyshire and Notts, have an extreme length of fully 65 miles, an extreme breadth of 23 miles, contain upwards of thirty seams of coal, varying from 6 inches to 11 feet in thickness, and aggregately 78 feet thick; include fourteen workable beds, aggregately 51 1/4 feet thick, also numerous alternations of grit and argillaceous strata, some of them containing ironstone, and in their entire mass exceed 3000 feet in depth. The working of iron has become a most important industry. Lead mines are in Swaledale and the neighbouring valleys, copper ores are partially found, and alum mines are on the NE coast. Jet beds are found in the Upper Lias formation, and the manufacture of jet ornaments gives employment to a number of persons, chiefly in Whitby. Marbles of various kinds abound in the NW, and some of quality suited for ornamental purposes cover an area of about 10 square miles, with a thickness of about 30 feet. Limestone of ordinary qualities for agricultural and building purposes is exceedingly plentiful, and excellent building-stone of other descriptions also abounds. Very valuable mineral waters are in various parts, and those of Harrogate and Scarborough have long been famous.

Railways, canals, and roads are plentiful in the populous parts, and penetrate sufficiently the upland regions, while the railways and the canals are almost crowded in the centres of mining and manufacture.

The soils vary exceedingly, according to the rocks, the altitude, and the cultivation. Those of the mountain tracts in general are so thin and poor as to be available only for pasture; those of the W valleys vary from peat earth to deep strong clay or loam; those of the great central valley are very diversified, but for the most part possess great fertility; those of the lower grounds of the NE are mostly either a fine red sand or a rich friable clay; those of the wolds are chiefly a light loam mixed with gravel; and those of the low flat country in the SE are principally strong alluvium. Agriculture, regarded in the aggregate, is in a medium condition, not so advanced as in Northumberland and Lincolnshire. Many tracts, including nearly all the uplands, are entirely pastoral; and so many portions of even the low tracts are devoted to grazing, that the county as a whole is productive far more of live stock than of grain. Farms in general are small and let at high rents from year to year. Cattle include many cross breeds and large numbers of short-horns, but are mostly of the long-horned breed. Sheep also are of different breeds. Horses for ordinary draught are bred in great numbers, and are in such repute that dealers from all parts of the kingdom frequent the local fairs to buy them; carriage horses, of highly esteemed character, are bred in Cleveland, and many of the best race-horses have been bred and trained in the county.

West Yorkshire is one of the largest manufacturing districts in the world. The woollen manufacture is the most important, the number of mills being more than half the whole number engaged in this manufacture throughout the United Kingdom. Leeds, Huddersfield, Bradford, Dewsbury, Keighley, and Halifax are the chief seats of this industry. The linen manufacture is carried on chiefly at Barnsley, cotton-spinning and manufacture principally at Huddersfield, Todmorden, and villages on the borders of Lancashire. Silk-spinning, dyeing, and chemical manufactures are also important industries. Sheffield is the seat of the steel manufactures, and has long been famous for its cutlery. There are large ironworks, numerous collieries, quarries, and firebrick works. The chief ports are Hull, Middlesboro, Whitby, Goole, and Scarborough.

The territory now forming Yorkshire was inhabited by the ancient British Brigantes, was included by the Romans in their Maxima Cæsariensis, was included in the Saxon Deira and Northumbria, passed about 827 to the West Saxons, was overrun by the Danes in 867, and at various subsequent periods till 1066. It suffered much devastation in resistance to William the Conqueror, was known at Domesday as Eurewicscire, but then included parts of Lancashire, Westmorland, and Cumberland, was the scene of various important struggles, and of the battles of Wakefield and Towton in the Wars of the Roses, figured greatly in 1536 in the "Pilgrimage of Grace," was the theatre of many struggles, and of the decisive battle of Marston Moor in the Civil Wars of Charles I., and witnessed many other important events, which have been noticed in our accounts of York and of the other ancient towns. Druidical stones, logan-stones, tumuli, and other ancient British antiquities are in various places. Roman stations were at York, Tadcaster, Castleford, Doncaster, Aldborough, Catterick Bridge, Malton, and Flamborough. Watling Street, Ermine Street, Ryknield Street, and other Roman roads have left either vestiges or memorials. Roman camps are numerous, Saxon and Danish monuments, chiefly mounds, are in various places, and Norman remains are plentiful. There are several ruins of old castles and monasteries, fine cathedrals at York and Ripon, and many interesting old churches, some of them wholly or partly Norman.

The Chapman code for Yorkshire is YKS.
Chapman codes are used in genealogy as a short data code for administrative areas, such as county and country names.

We have transcribed the entry for Yorkshire from the following: 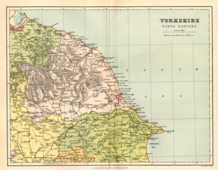 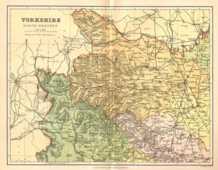 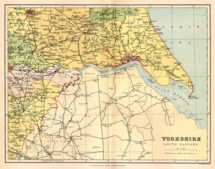 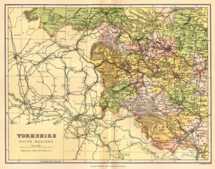