Worcestershire or Worcester, an inland county bounded on the NW by Salop, on the N by Staffordshire, on the E by Warwickshire, on the S by Gloucestershire, and on the W by Herefordshire. Its outline is very irregularly quadrangular. Its boundaries are mostly artificial. Its greatest length from N to S is about 34 miles; its greatest breadth is about 30 miles, its circuit is about 220 miles; and its area is 480,560 acres. The surface exhibits fine diversity of valley and hill, well watered and richly wooded, abounds everywhere with soft pleasing scenery, and includes many vantage-grounds, particularly the Malvern Hills on the SW boundary, commanding extensive delightful views. The chief rivers are the Severn, the Avon, the Stour, and the Teme. Igneous and upper Silurian rocks occupy small tracts in the W and SW, carboniferous rocks, including coal and ironstone, form a considerable tract in the NW around Bewdley, and trias rocks, variously new red sandstone, Bunter sandstone, and keuper marl, form nearly all the rest of the county. Quartz occurs in the Malvem and Lickey Hills, granite, syenite, and greenstone in the Malverns, limestone among the Silurian rocks, basalt in the Cawney and the Tansley Hills, rock salt at Stoke Prior, brine springs at Stoke Prior and Droitwich, and medicinal springs at Malvern, Evesham, Flyford Flavel, and Kidderminster.

Strong clay is the prevailing soil, a rich loamy sand abounds in the N, light sand and peat earth are in some parts of the E, and a rich alluvium is in some parts of the valley of the Severn and its tributary streams. Wheat, barley, beans, potatoes, and hops are the principal crops. Market-gardening is largely carried on, and apples and pears for the production of cider and perry, are extensively cultivated. Various breeds of cattle are fattened, sheep of the Leicester, Cotswold, Malvern, and other breeds are numerous, and hogs are kept for bacon.

The mineral wealth of the county is in coal, iron, and salt. The collieries, iron mines, and iron works are chiefly situated at Dudley. Chain cables are made at Cradley and Netherton, agricultural implements at Worcester, nails at Bromsgrove and Halesowen, needles and fish-hooks at Redditch. Salt is extensively produced at Droitwich. Kidderminster is an important seat of the carpet manufacture; Worcester is renowned for the manufacture of fine porcelain and glass; and fire-bricks are largely made at Stourbridge. The manufacture of gloves is an old established industry at Worcester. Among the miscellaneous industries of the county are alkali, vitriol, and vinegar works, paper-mills, mailings, breweries, crate-works, tanyards, and manufactories of combs, buttons, lanterns, woollen and worsted goods, &c.

Navigation seaward is enjoyed by the Severn, and very extensive inland navigation by connected canals. Railways traverse all sections of the county, and afford facile communication both within itself and to all parts of the kingdom.

The administrative county under the Local Government Act of 1888 includes part of the civil parish of Ipsley in Warwickshire, but excludes part of the county borough of Birmingham, and has an area of 480,342 acres, and a population of 385,309. It includes the city and county borough of Worcester, the county borough of Dudley, the municipal boroughs of Bewdley, Droitwich, Evesham, and Kidderminster, and 223 civil parishes and parts of five others. It has one court of quarter sessions, and is divided into twenty petty sessional divisions. Worcester has a separate commission of the peace, and a separate court of quarter sessions, and the other boroughs have separate commissions of the peace. Other towns are Bromsgrove, Halesowen, Malvern, Oldbury, Pershore, Redditch, Stourbridge, Stourport, and Tenbury. The county formerly returned four members to the House of Commons, but since 1885 it returns five members in five divisions, Western or Bewdley, Southern or Evesham, Mid or Droitwich, Northern, and Eastern. It also contains the parliamentary boroughs of Worcester and Kidderminster, and parts of the parliamentary boroughs of Birmingham and Dudley. Under the Redistribution of Seats Act of 1885, the boroughs of Bewdley, Droitwich, and Evesham were disfranchised, and Worcester lost one member. The ancient county contains 217 ecclesiastical parishes with parts of twelve others, and is almost entirely within the diocese of Worcester. The county is governed by a lord-lieutenant and a county council consisting of 19 aldermen and 57 councillors. It is in the Oxford judiciary circuit, and the North-Western military district. The assizes and the quarter sessions are held at Worcester, and H.M. prison is there. The county lunatic asylum is at Powick, and the county reformatory for boys at Shelsley Beauchamp. Population in 1801, 146,441; in 1821, 194,074; in 1841, 248,460; in 1861, 307,397; in 1881, 380,283; and in 1891, 413,760.

The territory now forming Worcestershire was inhabited by the ancient British Cornavii, Dobuni, and Silures, was divided by the Romans between their Flavia Cæsariensis and their Britannia Secunda, formed most of the commonwealth of Hwiccas, was afterwards all incorporated with Mercia, went as an earldom after the Norman Conquest to the D'Abitots, the Beauchamps, and others, and was the scene of the great battles of Evesham and Worcester. It is traversed by Ryknield Street and the Upper Salt Way, had Roman settlements at Upton and Worcester, and retains ancient British barrows on Clent Heath, Roman camps at three places, a Danish camp at Conderton, and ruined mediaeval castles at four places. About twenty-eight monastic establishments were in it, and remains of five of them still exist. Worcester Cathedral and about eighteen parish churches show interesting features of ancient architecture.

The following, according to the Redistribution of Seats Act of 1885, are the parliamentary divisions of Worcestershire, which do not appear under any specific name and return one member each to the House of Commons:—

The Chapman code for Worcestershire is WOR.
Chapman codes are used in genealogy as a short data code for administrative areas, such as county and country names.

The Historical Directories web site have a number of directories relating to Worcestershire online, including:
Kelly's, Pigot, Slater, etc.

We have transcribed the entry for Worcestershire from the following:

The Worcester - Return of Owners of Land in 1873 is available online.

Old map of Worcestershire circa 1895 (Gazetteer of England and Wales) 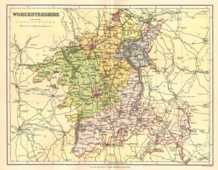