Wilts or Wiltshire, an inland county bounded on the NW and the N by Gloucestershire, on the E by Berks and Hants, on the S by Hants and Dorsetshire, and on the W by Somerset. Its outline is irregularly oblong, and its boundary, with trivial exceptions, is all artificial. Its greatest length, from N to S, is 53 miles, its greatest breadth is 38 miles, its circuit is about 180 miles, and its area is 880,248 acres. The surface, to the N of a line not far from coincident with the course of the G.W.R., is rich plain, and the surface to the S of that line is mainly an assemblage of bleak downs intersected by deep valleys. Marlborough Downs occupy much of the north-eastern part of the S section, Salisbury Plain occupies still more of the southern part of that section, and these are separated from each other by the Vale of Pewsey. The aggregate elevation of the S section is high, the downy heights for the most part rise from such lofty bases, and have such softly swelling outlines, as to look almost like billows of a troughy ocean. The principal summits rise to altitudes of from 775 to 1011 feet The chief rivers are the Lower Avon, the East Avon, the Wiley, the Nadder, the Bourne, the Kennet, and some headstreams of the Thames. Upper oolite rocks prevail in the NW, and upper cretaceous rocks in all other quarters. Portland stone is quarried at Swindon, Tisbury, and Fonthill; Kimmeridge clay ranges from Swindon to the W of Devizes; coral rag extends from Highworth to Bromham; Oxford clay forms a level tract, with many mineral springs; Kelloways rock takes name from predominating at Kelloways near Chippenham; combrash is worked in the neighbourhood of Malmesbury for building; and forest marble is converted, in several places, into coarse tiles and flagstones.

The soil in the NW is chiefly a calcareous reddish loam, that of the downs is chiefly a dissolved chalk, and that in the depressions or valleys among the downs is chiefly either a flinty loam or a deep black earth. Wheat is grown on the best soils; barley, turnips, and potatoes on sandy tracts; and clover, sainfoin, and rape on the downs. Dairy-cows are extensively kept in the NW for the producing of Wiltshire cheese, horned cattle are fattened, and calves are bred for veal. Sheep, chiefly of the Southdown breed crossed with the Leicester and Cotswold breeds, are kept on the central and southern pastures. Pigs are reared in vast numbers, principally on the dairy farms, for conversion into the well-known Wiltshire bacon.

Estates are of all sizes; arable and dairy farms also are of all sizes, from comparatively small to so much as 5000 acres, and sheep farms range about 2000 acres. About 2 miles from Downton is the celebrated College of Agriculture, founded by Professor Wrightson. Broadcloths and other kinds of woollen goods are made at Bradford, Trowbridge, and some other places; carpets of excellent quality at Wilton, and silk goods at Devizes and Salisbury. The G.W.R. locomotive and carriage works are at Swindon, and there are large bacon-curing establishments at Calne. The Thames and Severn Canal, the Kennet and Avon Canal, and the Wilts and Berks Canal give extensive facilities of inland,navigation to the N. The G.W.R. goes quite through the county, and sends off several branches. The S.W.R. also traverses the southern part of the county.

The county is divided for parliamentary purposes into five divisions—viz. (1) Northern or Cricklade, (2) North-Western or Chippenham, (3) Western or Westbury, (4) Eastern or Devizes, (5) Southern or Wilton. It also includes the parliamentary borough of Salisbury. The county includes the seven municipal boroughs of Calne, Chippenham, Devizes, Malmesbury, Marlborough, Salisbury, and Wilton. Wilts has one court of quarter sessions, and is divided into sixteen petty sessional divisions. The boroughs of Devizes, Marlborough, and Salisbury have separate commissions of the peace, and the boroughs of Devizes and Salisbury have, in addition, separate courts of quarter sessions. The county contains 334 entire civil parishes and parts of 5 others. It contains 312 entire ecclesiastical parishes or districts, with parts of 11 others. The county is governed by a lord lieutenant and custos, a high sheriff, and a county council consisting of 20 aldermen and 60 councillors. It is in the Western judicial circuit, the Southern military district, and chiefly in the diocese of Salisbury, but partly in that of Gloucester and Bristol. The assizes are held at Salisbury and Devizes. H.M. Prison is at Devizes. Population of the county (1801) 183,820, (1821) 219,574, (1841) 256,280, (1861) 249,311, (1881) 258,965, (1891) 264,997.

The territory of Wilts was inhabited by the Belgæ and Attrebatii; was included by the Romans in their Britannia Prima; formed part of the Saxon kingdom of Wessex; was overrun by the Danes in 871, 1003, 1006, and 1011; was given at the Norman Conquest to William d'Ewe, Edward de Saresbury, Robert d'Oili, Ralph de Mortimer, Milo Crispin, and others; was the scene of sharp contests in the war between Maud and Stephen; shared considerably, but not so much as many other counties, in the Civil Wars of Charles I.; and participated, at Salisbury, in prominent events of the revolution of 1688. Great ancient monuments, of the kind called Druidical, are at Stonehenge and Avebury. Cromlechs are at Bulford, Clatford, Littleton Drew, and Monkton Fields. Ancient British boundaries are presented in Wans Dyke and Bokerley Ditch. An ancient British road is the Ridge Way. Ancient British villages are traceable on Salisbury Plain. Barrows of four kinds stud all the chalk hills and valleys. Ancient camps, variously British, Roman, Saxon, and Danish, are in numerous places. Roman roads are the Fosse Way, Ermine Street, the Julian Way, and roads from Old Sarum to Bath, Dorchester, Uphill, Winchester, and Silchester. Norman castles have left remains or mounds at Ludgershall, Wardour, Marlborough, Malmesbury, Devizes, Castlecombe, and Sherrington. Monastic remains are at Laycock, Bradenstock, Monk Farleigh, Kingswood, Kingston St Michael, and Malmesbury.

The Chapman code for Wiltshire is WIL.
Chapman codes are used in genealogy as a short data code for administrative areas, such as county and country names.

Findmypast, in association with the Wiltshire Record Office, have the Baptisms, Banns, Marriages, and Burials online for Wiltshire parishes.

The Historical Directories web site have a number of directories relating to Wiltshire online, including:
Kelly's, Pigot, Slater, etc.

We have transcribed the entry for Wiltshire from the following:

Old map of Wiltshire circa 1895 (Gazetteer of England and Wales)

The Visitation of Wiltshire 1623. Edited by George W. Marshall, LL.D. is online. 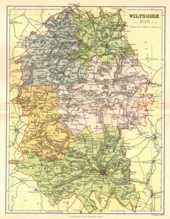