Westmorland, an inland county, bounded on the NW and the N by Cumberland, on the NE by Durham, on the E and the SE by Yorkshire, on the S and the SW by Lancashire. Its outline is irregular. Its boundaries, to a considerable extent and at intervals, are formed by Windermere, Ulleswater, and the rivers Eamont and Lune. Its greatest length south-south-westward is about 35 miles, its greatest breadth is 40 miles, its circuit is about 135 miles, and its area is 500,906 acres. The surface is mainly a congeries of high uplands, diversified with moor, studded with mountain summits, and intersected with deep valleys. The heights are generally rugged and irregular, and they rise in most parts, particularly in the NE and in the W, to altitudes of from 1098 to 3055 feet. Much of the scenery is romantic or picturesque, and that in the W forms a main part of the features of the English lake region. The principal rivers are the Eden, the Lune, the Kent, the Eamont, and the Lowther. The principal lakes, besides the two great ones on the boundary, are Haweswater, Grasmere Lake, Rydal Water, Elter Water, and seven or eight tarns. Mineral springs are at Clifton, Roundthwaite, and near Shap. The principal tracts consist of Silurian rocks, lower and upper; some small tracts are Devonian; a broad belt in the NE, and considerable tracts in the S are carboniferous, chiefly limestone and shale, a broad belt in the extreme NE beyond the limestone is new red sandstone; and interspersed spots throughout the Silurian tracts are trap and granite. Gypsum is quarried at Acornbank; a grey or greenish limestone resembling marble near Kendal, Kirkby Lonsdale, and Ambleside; roofing slate of excellent quality at Kentmere, Whitemoss, Thrang Crag, and other places; and coarse slate, ragstone, and bluish granite, in many limited localities. A poor coal is worked on Stainmoor and near Mallerstang and Casterton; lead ore at Dunfell, Eagle Craig, Greenside, Glenridding, Hartley, and Staveley; and copper ore near Ashby, Orton, Raine, Shap, and Kirkby Lonsdale. Iron ore (hematite) is also obtained.

The soils on a few farms are clayey or loamy, but in general are gravelly and dry. Much of the hill pastures, mainly in consequence of perpetual moisture, is good. The chief crops are oats, barley, wheat, turnips, potatoes, and clover. The cattle are Durham shorthorns, Scotch breeds, and a rough long-horn breed; the sheep are chiefly a white-faced Silverdale breed, and goats are numerous. Many farms of from 10 to 300 acres are held as freeholds or copyholds subject to fines.

Manufactures, chiefly consisting of woollen cloths, are confined principally to Kendal, Milnthorpe, and their neighbourhoods.

The Lancaster and Carlisle railway, a branch of the L. & N.W.R., traverses the county through its centre; a branch goes from it at Oxenholme to Windermere; a line coming in from Settle joins it at Low Gill; a line leaves it at Tebay junction to go eastward into Durham; and a branch leaves that line in the neighbourhood of Kirkby Stephen, and goes down the valley of the Eden into a junction with the Lancaster and Carlisle at Clifton. The Lancaster and Kendal Canal starts from Kendal, and runs for some distance parallel to the river Kent, and after crossing the Bertha and passing Burton-in-Kendal enters Lancashire. There is steamer communication on the Windermere and Ulleswater lakes.

The county contains 109 entire civil parishes, and also the two boroughs of Appleby and Kendal, is divided into East, West, Kendal, and Lonsdale wards; and for parliamentary purposes into the Northern or Appleby, and the Southern or Kendal divisions, each of which returns one member. The chief seats include Lowther Castle and Brougham Castle.

The county is governed by a lord lieutenant and custos, a hereditary high sheriff, and a county council, and for military purposes is in the North-western district, and is in the Northern judiciary circuit. The County Council is composed of a chairman and vice-chairman, 14 aldermen, and 42 councillors. The assizes are held at Appleby, and the quarter sessions are held there and at Kendal, which has a separate commission of the peace. The county jail is at Appleby, and H.M. prison at Kendal. The lunatic asylum for this county and Cumberland is at Carlisle. There are five petty sessional divisions—viz., Ambleside, East Ward, Kendal Ward, Lonsdale Ward, and West Ward. The county contains 81 entire ecclesiastical parishes, with parts of 3 others, and is entirely in the diocese of Carlisle. The population of the county is small in proportion to its area, being 66,098 to an area of 500,906 acres, or 0.13 persons to an acre. There are only the two counties of Huntingdon and Rutland with less population.

The territory now forming Westmorland was inhabited by the ancient British Brigantes, was included by the Romans in their Maxima Cæsariensis, and formed part of the Saxon kingdom of Northumbria. The Scots made many devastating incursions into it in the middle ages, the Civil Wars of Charles I. affected it strongly at Appleby, and the rebel invasion of 1745 caused a skirmish at Clifton. The Roman Watling Street, the Maiden Way, and another Roman road traverse it in various parts, and there are ancient British, Roman, Danish, and Saxon camps in about twelve places, ancient tumuli in four or more places, stones of the kind called Druidical in six places, old castles or remains of them at sixteen or more places, abbey ruins at Shap, and interesting old churches at Askham and Kirkby Thore. The county gives the title of Earl to the family of Fane.

The Chapman code for Westmorland is WES.
Chapman codes are used in genealogy as a short data code for administrative areas, such as county and country names.

The Historical Directories web site have a number of directories relating to Westmorland online, including:
Kelly's, Pigot, Slater, etc.

We have transcribed the entry for Westmorland from the following:

A listing of the Wards in Westmorland, with the parishes contained in them.

The Return of Owners of Land in 1873 for Westmorland is available to browse.

Old map of Westmorland circa 1895 (Gazetteer of England and Wales) 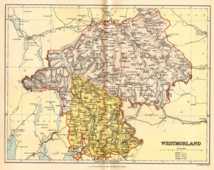