Buckinghamshire, or Bucks, an inland county, bounded on the NW and N by Northamptonshire, on the NE by Beds, on the E by Beds and Herts, on the SE by Middlesex, on the S and SW by Berks, and on the W by Oxfordshire. It has an irregular outline, but forms on the whole a slender oblong, lying N and S. Its only natural boundaries are the river Thames, dividing it from Berks, and a few miles of other streams, dividing it from parts of other counties. Its greatest length is 53 miles; its greatest breadth, 27 miles; its mean breadth, about 18 miles; its circumference, 138 miles; and its area, 475,694 acres. Its surface in the north is gently undulated, in the centre comprises the rich vale of Aylesbury, watered by the Thame, and in the south includes part of the Chiltern Hills, about 16 miles broad, with summits from 683 feet to 904 feet high. The chief rivers are the Thames, the Thame, the Ouse, the Colne, the Ousel, and the Wick. Lias rocks occupy a small tract on the NW border, adjacent to Brackley; oolites, successively lower, middle, and upper, occupy most of the county from the northern boundary to lines a little south of Stoke-Hammond and Aylesbury; cretaceous rocks, successively lower greensand, upper greensand, and chalk, the last much the broadest, occupy most of the county thence to the southern boundary; and rocks of the lower eocene occupy a tract on the southern border around Farnham. Fuller's earth on the eastern border, and some tolerable marble near Newport-Pagnell, are the chief useful minerals.

The soils include sandy, marly, and clayey spots, but principally range from rich loam to poor chalk. Little land is waste, and much is disposed in dairy pasture. Farms average about 200 acres, and, few exceed 400. Approved rotations are followed on most of the arable lands; and wheat, barley, oats, sainfoin, and beans are grown even on parts of the Chilterns. Commons of some extent are at Wickham, Iver, and Stoke, and heaths at Fulmor and Great Harwood. Beech and oak are the principal timber; and the former, called in Saxon "buccen," is said by some antiquarians to have given the name to the county. Woods are plentiful on the Chilterns, in Whadden-chase, and around Brill. Much butter and some cream-cheese and condensed milk are made for the London market; the cattle are chiefly Hereford and Yorkshire shorthorns, and the sheep, variously Dorsets for lambs, Southdowns for mutton, and mixed Gloucester and Leicester for wool. Berkshire hogs are reared numerously on the dairy farms, many calves also are fattened there for veal, and over £20,000 worth of ducks is sent annually to London.

The chief manufactures of Bucks are paper, woven silk, shoes, and wooden-ware, with straw-plaiting and bonnet making. Wood-work has become quite an important industry, the beech with which the county abounds being worked up into brush handles, bowls, wooden spades, and into wooden chairs of various patterns, which are produced in large numbers. Formerly lace-making was the all-important industry of the county, but this has now, for the most part, passed to Nottingham and other towns, where machinery is employed. The county is well supplied with railway accommodation, the chief line being that of the L. & N.W., which runs for 25 miles in the NE, by way of Tring, Leighton Buzzard, Bletchley, and Wolverton; with branches from Cheddington Junction to Aylesbury, from Bletchley by Fenny Stratford to Bedford and by Winslow to Oxford, and from Wolverton to Newport-Pagnell. The G.W.R. crosses the SE tract, entering by Colnbrook, and passing by Slough to Maidenhead, Reading, and the west of England; with branches to Eton and Windsor, through High Wycombe to Princes Risborongh, and from thence to Thame and Oxford on the W, and to Aylesbury and Buckingham on the N. There are also branches from the High Wycombe line to Great Marlow, from Princes Risborough to Watlington, and from Colnbrook to Staines. The metropolitan extension, opened for traffic at the end of 1892, affords facilities to Amersham and Chesham from all parts of the metropolis. The Grand Junction Canal traverses the NE of the county somewhat parallel to the N.W.R. from the vicinity of Tring to the vicinity of Stony Stratford, sending off branches to Wendover, Aylesbury, and Buckingham.

The county is divided into the hundreds of Ashendon, Aylesbury, Buckingham, Burnham, Cottesloe, Desborough, Newport, and Stoke. The hundreds of Burnham, Desborough, and Stoke form the Chiltern Hundreds, the stewardship of which, now a purely nominal office, is retained in the gift of the Chancellor of the Exchequer, and is given to members of the House of Commons who wish to resign their seats, in order to comply with the regulation which forbids resignation except by the acceptance of an office of honour and profit under the Crown. The ancient county is divided for parliamentary purposes into three divisions, and includes also a portion of the parliamentary borough of New Windsor; it has 207 ecclesiastical parishes or districts, with parts of 9 others. The administrative county includes two municipal boroughs, has one court of quarter sessions, is divided into 12 petty sessional divisions; and contains 221 civil parishes, and parts of 3 others; the boroughs of Buckingham and Chipping Wycombe have separate commissions of the peace.

By the Local Government Act, 1888, Buckinghamshire became an administrative county governed by a County Council consisting of 17 aldermen and 51 councillors. Its meetings are held at Aylesbury, The county is principally in the diocese of Oxford, and forms an archdeaconry which is subdivided into the rural deaneries of Amersham, Aylesbury, Bletchley, Buckingham, Burnham, Claydon, Ivinghoe, Mursley, Newport, Waddesdon, Wendover, and Wycombe.

The territory now forming Buckinghamshire was inhabited in the ancient British times by the tribes Cassii, Ancalites, and Dobuni; it was included by the Romans, first in their province of Britannia Superior, afterwards in that of Flavia Cæsariensis, and it formed a part of the Saxon kingdom of Mercia. The county made a great figure in the Civil War of the time of Charles I.; took the lead in raising arms against the king and in swaying the action of parliament, and was for some time the headquarters of the king's forces. Remains or traces of ancient camps and entrenchments—variously British, Roman, and Saxon—occur at Wycombe, Danesfield, All--Hollands, Cholsbury, Hawridge, Hedgerleydean, Mendenham, and Ellesborough. Icknield Street came in from Dunstable, and went past Andover and Princes-Risborough into Oxfordshire; Watling Street went past Fenny-Stratford, and Stony-Stratford, and Akeman Street went across the north. Ancient castles stood at Buckingam, Castlethorpe, Lavendon, Whitchurch, and several other places, but have all disappeared. Remains exist of abbeys at Medmenham and Notley, of a priory at Missenden, of nunneries at Burnham and Ivinghoe, of monastic colleges at Ashbridge and Eton, and of a monastic hospital at Newport-Pagnell; but all remains of 14 other monasteries and 9 other hospitals, which once existed, are extinct. Eight churches show ancient Norman features, and two others are good specimens of ancient English. The county gives the title of Earl to the family of Hampden-Hobart.

The Chapman code for Buckinghamshire is BKM.
Chapman codes are used in genealogy as a short data code for administrative areas, such as county and country names.

The Historical Directories web site have a number of directories relating to Buckinghamshire online for the period 1833-1915, including:
Kelly's, Pigot, Slater, Harrod.

We have Kelly's Directory of Buckinghamshire, 1939 available to browse.

We have transcribed the entry for Buckinghamshire from the following:

A listing of the Hundreds in Buckinghamshire, with the parishes contained in them.

The Return of Owners of Land in 1873 for Buckinghamshire is available to browse.

Old map of Buckinghamshire circa 1895 (Gazetteer of England and Wales)

A listing of the Poor Law Unions in Buckinghamshire, with the parishes contained in them.

The Visitation of Buckinghamshire, 1634 is online. 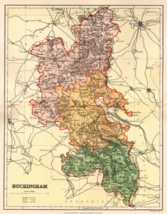