Warwickshire or Warwick, an inland county, bounded on the NW by Staffordshire, on the NE by Leicestershire, on the E by Northamptonshire, on the SE by Oxfordshire, on the SW by Gloucestershire, on the W by Worcestershire. Its outline is irregular, but except for saliencies in the S is not far from forming four nearly equal sides. Its boundary line along all the NE is Watling Street, but scarcely anywhere is either river or watershed. Its length from N to S is 50 miles, its greatest breadth is 34 miles, its circuit is about 195 miles, and its area is 577,462 acres; population, 805,072. The surface includes few hills except offshoots of the Cotswolds, and in a general view is gently undulated, well-wooded, and softly picturesque. The chief streams are the Avon, the Tame, the Alne, the Arrow, the Stour, the Dene, the Leam, the Sowe, the Itchen or Ichene, the Rea, the Bourne, the Blythe, the Colne, and the Anker. .Mineral springs are at Leamington, Newnham Regis, Southam, Stratford, and Birmingham. A coal-field, with seams of coal 3 and 4 feet thick, extends along the NE border to the SE of Tamworth, is 16 miles long, and has a mean breadth of about 3 miles. A broad tract of permian rocks, chiefly conglomerate sandstone and red marl, extends southward from the coal-field past Coventry to within a short distance of Leamington. Trias rocks, chiefly new red sandstone and keuper marl, occupy nearly all the rest of the area. Coal is extensively worked. Iron-ore, fireclay, marl, blue clay, and limestone are plentiful, gritstone is obtained at Compton, and blue flag-stone for mantlepieces and other purposes is quarried at Bidford, Wilncote, and Temple Grafton.

Soils are of nearly all kinds, but strong clay-loams and strong marly clays are most common, and with slight exceptions all the soils in most parts are very fertile. The long-horned, the Herefordshire, and the Scotch breeds of cattle are generally preferred for grazing, but other breeds are in use for the dairy. The sheep are chiefly Southdowns and polled Leicesters. Estates are of all sizes, and farms average about 150 acres, and are mostly held from year to year.

Manufactures are chiefly hardware and cutlery at Birmingham ; ribbons at Coventry and Nuneaton; watches, bicycles, and tricycles at Coventry; needles and fish-hooks at Alcester.

The administrative county includes the whole of the city and county borough of Birmingham, but excludes 804 acres divided among the administrative counties of Leicester, Worcester, and Stafford. Acreage, 578,595; population, 838,030. It includes the cities and county boroughs of Birmingham and Coventry, and the municipal boroughs of Leamington, Stratford-on-Avon, and Warwick. The administrative county contains 247 entire civil parishes and parts of 12 others, the county borough of Birmingham 2 entire civil parishes and parts of 3 others, and the county borough of Coventry parts of 2 civil parishes. The ancient county contains 276 entire ecclesiastical parishes and parts of 14 others. The administrative county has one court of quarter sessions, and is divided into 14 petty sessional divisions. The six boroughs have separate commissions of the peace, and the boroughs of Birmingham and Warwick have in addition separate courts of quarter sessions. The ancient county is divided for parliamentary purposes into four divisions—Northern or Tamworth, North-Eastern or Nuneaton, South-Western or Stratford-on-Avon, and South-Eastern or Rugby. It also includes the parliamentary boroughs of Warwick and Leamington, Aston Manor, Coventry, and part of the parliamentary borough of Birmingham. The county town is Warwick; the towns with more than 2000 inhabitants each, besides the boroughs, are Rugby, Nuneaton, Coleshill, Solihull, Atherstone, and Kenilworth; and there are about 360 smaller towns, villages, and hamlets. There are a large number of seats of noblemen and gentlemen.

The county is governed by a lord-lieutenant and a county council consisting of 18 aldermen and 54 councillors, and is in the north-western military district, the Midland judiciary circuit, and the diocese of Worcester. The assizes are held at Warwick; quarter sessions at Warwick and Coventry. H.M. prison is at Warwick.

The territory now forming Warwickshire was inhabited by the ancient British Cornavii and Dobuni, was included by the Romans in their Flavia Cæsariensis, and formed part of the Saxon kingdom of Mercia. Struggles occurred in it between the Mercians and the West Saxons, between the Saxons and the Danes, between the adherents of Stephen and those of Maud, between Henry III. and his rebel barons, and between the Royalists and the Parliamentarians in the Civil Wars of Charles I. The Roman Watling Street runs along the NE boundary and across a wing from Atherstone to Fazeley; the Fosse Way comes in on the S at Halford, and runs north-north-eastward to Watling Street at High Cross; and Icknield Street goes through Birmingham and traverses a small part of the NW border. Roman stations were at Alcester, Chesterton, High Cross, and Mancetter; and Roman camps are at Brinklow, Edgehill, Ratley, and Oldbury. Ancient castles or ruins of them are at Warwick, Kenilworth, Astley, Beauchamp, Brandon, Maxstoke, and Tamworth. About fifty-seven monastic houses were in the county, and remains of some of them are at Combe, Merevale, Stoneleigh, Coventry, Kenilworth, Maxstoke, Nuneaton, and Polesworth. There are many interesting old churches.

The Chapman code for Warwickshire is WAR.
Chapman codes are used in genealogy as a short data code for administrative areas, such as county and country names.

The Historical Directories web site have a number of directories relating to Warwickshire online, including:
Kelly's, Pigot, Slater, etc.

We have transcribed the entry for Warwickshire from the following:

The Return of Owners of Land in 1873 for Warwickshire is available to browse.

Old map of Warwickshire circa 1895 (Gazetteer of England and Wales)

The Visitation of Warwickshire 1619 is available on the Heraldry page. 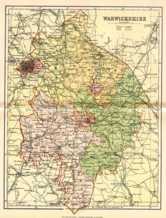