Surrey, an inland county, bounded on the NW by Berks, on the N by Bucks and Middlesex, on the E by Kent, on. the S by Sussex, and on the W by Hants. Its boundary along all the N is the river Thames. Its greatest length from NE to SW is 37 miles, its greatest breadth is 27 miles, and its circuit is about 145 miles. The area of the ancient county was 485,128 acres, but several parishes are now included in the county of London, and the area of the present administrative county is 461,230. A line of downs bisects it from E to W nearly through the centre, culminates at an altitude of 993 feet, and abounds in romantic and picturesque scenery. Another line of downs parallel to the preceding runs along part of the S border, and a group of downs lies in the NE, between Croydon and Epsom. The rest of the surface is much diversified with undulations, knolls, and hills, and exhibits much pleasing natural scenery adorned with culture. The chief streams besides the Thames are the Wey, the Mole, and the Wandle. Mineral springs are at Epsom, Chobham, Streatham, Kingston, Dulwich, Godstone, Stoke, and Dorking. Lower chalk rocks, chiefly Weald clay, occupy all the S; upper chalk rocks form a belt along the course of the central line of downs; and lower and middle eocene rocks, with large preponderance of London clay, occupy all the rest of the area. Ragstone, manorial chalk, fire clay, and fullers' earth are the chief useful minerals.

The soils correspond much to the character of the underlying rocks, yet exhibit considerable intermixture of chalk, clay, loam, and humus, and are exceedingly various. More than 60,000 acres are heath. The county is one of the driest and warmest in England. Agricultural practice varies with the character of the land and with distance from the metropolis. Wheat yields from 2 to 6 quarters per acre, barley from 4 to 7 quarters. Beans, pease, and turnips are much grown on the arable lands; clover, sainfoin, and woad on certain soils; hops are cultivated near Farnham; cabbages, carrots, parsnips, asparagus, and kindred plants are currently cultivated in the market-gardens; and enormous quantities of mint, lavender, camomile, liquorice, rosemary, hyssop, and other seasoning or medical plants are raised in Mitcham and its neighbourhood. Farms average from 200 to 300 acres, but are of all sizes. Cattle of various breeds are fattened; house-Iamb, particularly around Guildford, is reared for the markets; sheep, chiefly Southdowns, are pastured in the centre and in the west; and Berkshire pigs and Dorking fowls are largely kept.

The ancient or geographical county of Surrey includes metropolitan parishes south of the Thames which now form part of the administrative county of London. It is divided for parliamentary purposes into the following six divisions, each of which returns one member—viz., North-Western or Chertsey, South-Western or Guildford, South-Eastern or Reigate, Mid or Epsom, Kingston, and North-Eastern or Wimbledon. The county also contains the parliamentary borough of Croydon. The administrative county includes five municipal boroughs exclusive of the county borough. It has one court of quarter sessions, and is divided into eleven petty sessional divisions. The boroughs of Croydon, Godalming, Guildford, Kingston-on-Thames, and Reigate have separate commissions of the peace, and Croydon and Guildford have in addition separate courts of quarter sessions. The central criminal court has jurisdiction over certain parishes adjacent to London. All those civil parishes within the county of Surrey of which any part is within 12 miles of, or of which no part is more than 15 miles from, Charing Cross, are within the metropolitan police district. The administrative county contains 133 entire civil parishes, and the county borough of Croydon one entire civil parish. The ancient county (exclusive of the parishes now in the county of London) contains 210 entire ecclesiastical parishes or districts, and parts of 6 others, situated in the dioceses of Rochester, Winchester, Canterbury, Oxford, and Chichester.

Surrey is governed by a lord lieutenant and custos, a high sheriff, and a county council consisting of 19 aldermen and 57 councillors. It is in the south-eastern circuit, the assizes being held alternately at Kingston and Guildford. H.M. Prison is at Wandsworth.

The territory now forming Surrey was inhabited by the ancient British Bibroci, or Rhemi, or Regni; was included by the Romans in their Britannia Prima; took the name of Suthrige or Suthrea, in the Saxon times, seemingly with allusion to its position S of the Thames; was then a small separate state, whose reguli were subject first to the South Saxons, afterwards to successively Wessex, Mercia, and Kent; became one of the many earldoms of Godwin and his sons; was given, after the Norman Conquest, to William de Warenne, and gave to him and his descendants the title of Earl. The chief subsequent event connected with it was the signing of the great charter at Runnymede, and other public events were mostly intertwined with the history of the metropolis. Few remains of either the ancient British, the Roman, or the Saxon periods exist. Stone Street and Ermine Street have left some vestiges, and Roman relics, of no great interest, have been found at various places. Guildford Castle is the county's best specimen of Norman military architecture; and Farnham Castle, of Early Edwardian. Specimens of monastic buildings of early English date occur in Waverley Abbey and Newark Priory.

The Chapman code for Surrey is SRY.
Chapman codes are used in genealogy as a short data code for administrative areas, such as county and country names.

We have a database containing transcripts of marriage records for some parishes in Surrey.

Ancestry.co.uk, in association with Surrey History Centre, have images of the Parish Registers for Surrey online.

The Historical Directories web site have a number of directories relating to Surrey online, including:
Kelly's, Pigot, Slater, etc.

We have transcribed the entry for Surrey from the following:

The Return of Owners of Land in 1873 for Surrey is available to browse.

Old map of Surrey circa 1895 (Gazetteer of England and Wales) 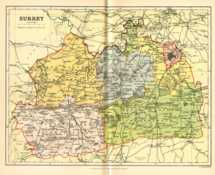