Suffolk, a maritime county, bounded on the N by Norfolk, on the E by the German Ocean, on the S by Essex, and on the W by Cambridgeshire. Its boundary line, along most of the N, is the rivers Little Ouse and Waveney; along most of the S, the river Stour; along part of the W, the river Lark. Its greatest length from E to W is about 50 miles, its greatest breadth from N to S is 30 miles, its length of coast is 50 miles, and its circuit is about 212 miles. The area of the ancient county is 952,709 statute acres. The administrative county, which includes the civil parishes of Ballingdon, Haverhill, and part of Bulmer in Essex, and the parish of All Saints, Newmarket, in Cambridgeshire, and which loses parts of the civil parishes of Gorleston, Great Yarmouth, and St Cuthbert and St Mary, Thetford, in Norfolk, has an area of 947,724 statute acres; population of the ancient county, 371,235; of the administrative county, 361,790. The coast consists largely of crag and clay cliffs, with fine views. The interior is mainly level, has few considerable elevations, and rises in the extreme NW into a chalk ridge. The chief streams, besides those on the boundaries, are the Blythe, the Alde, the Deben, the Gipping, the Orwell, and the Bret. Lower eocene rocks, chiefly London clay, form a small tract in the S, to the E and SE of Sudbury, another small tract around Saxmundham, and a narrow belt along the coast to the S of Aldborough; upper tertiary rocks, chiefly crag, form a considerable belt on the seaboard, all to the S of Lowestoft; and upper chalk rocks form all the rest of the area. Brick clay and chalk are the only minerals of any note. The soils are very various, and pass from the heaviest clay, through strong fertile loams, to the lightest sand. Agriculture is advanced and skilful. The long fallow for barley is practised on the clay lands, and the four-course shift is followed for turnip lands. The chief crops are wheat, barley, oats, rye, pulse, buckwheat, turnips, carrots, tares, cole-seed, clover, and sainfoin, and minor crops are chicory, hemp, and hops. Farms are large, but many estates are small, and leases from seven to fourteen years are common. The cows are a light red polled breed and rich milkers. The sheep are chiefly of the Norfolk and Southdown breeds.

The horses are chiefly "the Suffolk punches," well adapted to farm work. The manufactures include cotton, silk, velvet, linen, woollen, horse-hair, paper, cocoa-nut matting, chemical manures, agricultural implements, railway plant (at Ipswich), gun-cotton (at Stowmarket), making on a large scale, and coach and ship building. Coprolites are found in large quantities, and gun flints for export are still manufactured at Brandon. The fisheries on the coast are important, and immense quantities of herring and mackerel are taken by the Suffolk fishermen.

The navigations are aggregately large and facile, and there is hardly a part of the county more than 10 miles from a navigable stream, but they have not induced a corresponding amount of commerce. Railways, chiefly lines of the G.E.R. system, traverse all sections of the county, and are tolerably well ramified.

Suffolk is divided for administrative purposes into two counties—East and West—and also contains the county borough of Ipswich and part of the county borough of Great Yarmouth. The administrative counties also include the seven municipal boroughs of Aldeburgh, Beccles, Bury St Edmunds, Eye, Lowestoft, Southwold, and Sudbury. The administrative county of East Suffolk contains 318, that of West Suffolk 176, and the county borough 14 entire civil parishes; there are besides six parishes which are partly in the county borough and partly in the administrative county of East Suffolk, and six which are partly in West Suffolk and other administrative counties. The ancient county contains 448 entire ecclesiastical parishes and districts, and parts of 15 others. It is situated partly in the diocese of Ely and partly in that of Norwich. For parliamentary purposes the county is divided into (1) the Northern or Lowestoft, (2) the North-Eastern or Eye, (3) the North-Western or Stowmarket, (4) the South or Sudbury, and (5) the South-Eastern or Woodbridge divisions. It includes the parliamentary boroughs of Bury St Edmunds and Ipswich, and part of the borough of Great Yarmouth, There is one court of quarter sessions for the two administrative counties of East and West Suffolk, being usually held at Ipswich for East Suffolk, and then by adjournment at Bury St Edmunds for West Suffolk. East Suffolk is divided into eleven, and West Suffolk into eight petty sessional divisions. The boroughs of Bury St Edmunds, Ipswich, Sudbury, Eye, and Southwold have separate commissions of the peace, and the three first named have also separate courts of quarter sessions. H.M. Prison is at Ipswich, and is a massive building, originally erected in 1786, but which has since undergone considerable alteration and enlargement. The County Lunatic Asylum is at Melton, near Woodbridge, and is a plain building of brick, opened in 1829 for the reception of lunatics, and greatly enlarged and improved in 1886. The Suffolk General Hospital is at Bury St Edmunds, and is a plain but spacious building, rebuilt in 1864, and having accommodation for about ninety in-patients. The Suffolk Reformatory for boys at Thorndon, near Eye, was established as a philanthropic institution in 1856 by the late Sir E. C. Kerrison, Bart., and was taken over by the county in 1887. It has accommodation for eighty boys, who are employed on the land. The county is governed by a lord lieutenant and custos rotulorum. There are two county councils—that for East Suffolk consists of 19 aldermen and 57 councillors, and that for West of 16 aldermen and 48 councillors. The council for East Suffolk meets at Ipswich, and that for West Suffolk at Bury St Edmunds.

The territory now constituting Suffolk was inhabited by the ancient British Iceni, was included by the Romans in their FIavia Cæsariensis, became part of East Anglia and the Danelagh, and took its name of Suffolk by corruption of South-folk, designating its inhabitants in contradistinction to the North-folk in Norfolk. It was ravaged by Sweyne the Dane in 1010, and it became the scene of frequent tumult and warfare after the Norman Conquest. An earldom of Suffolk existed before the Conquest, and passed to the Malets, the Bigods, the Clares, the Magnavilles, and others. Ancient British, Saxon, and Danish remains are chiefly earthworks, few and inconspicuous. Roman stations were at Stratford, Ixworth, Burgh, Dunwich, and Woolpit. Roman roads connected the Roman stations, and went to Colchester. Ancient camps occur in five places, and ancient baronial castles were at eleven. Abbeys were at three places, priories at seventeen, nunneries at five, and collegiate churches at four.

The Historical Directories web site have a number of directories relating to Suffolk online, including:
Kelly's, Pigot, Slater, etc.

We have transcribed the entry for Suffolk from the following:

The Return of Owners of Land in 1873 for Suffolk is available to browse.

Old map of Suffolk circa 1895 (Gazetteer of England and Wales) 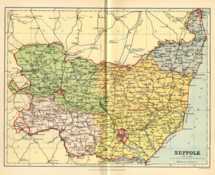