Somerset or Somersetshire, a maritime county, bounded on the NW by the Bristol Channel, on the N by Gloucestershire, on the E by Wiltshire, on the SE by Dorsetshire, on the S by Dorsetshire and Devonshire, and on the W by Devonshire. Its outline is irregular, but may be said to comprise a large oblong, extending SSW from the boundary with Gloucestershire, and a smaller oblong, extending westward from the S half of the former to the W boundary with Devonshire. Its greatest length is 71 miles, its greatest breadth 40 miles, its circuit about 230 miles, its extent of coast about 65 miles, and its area 1,042,488 acres. The coast is low and sandy in most of the N, cliffly and picturesque in much of the S or W, and has no considerable indentation except Bridgwater Bay. The surface exhibits almost every variety of feature, from flat fen and luxuriant valley to barren moor and lofty hill. Much of the fen has been highly improved. Many of the valleys have finely contoured flanks and bottoms. Some of the hills are isolated, while others extend in ranges; and some are smooth and verdant, while others are rugged and desolate. Lansdown and Dundry hills adorn the N, the Mendips range across one half or more of the central part of the great oblong, the Poldens range across one-third of the S part of that oblong; the Blackdowns are on the boundary with Dorset; the Quantocks and the Brendons finely diversify the E and the central parts of the smaller oblong, and a moor extends in wild ruggedness over the W border to Devonshire. The greatest heights range in altitude from 790 to 1668 feet. The Lower Avon river runs in the N, partly in the interior, but chiefly along the boundary; and the other chief rivers are the Frome, the Yeo, the Axe, the Brue, the Parret, the Isle, the Ivel or Yeo, the Tone, the Carey, and the Exe. Devonian rocks occupy most of the W half of the smaller oblong; trias rocks occupy much of the E half of that oblong, and occur plentifully also throughout the W part of the great oblong; lias and oolite rocks occupy most of the other parts of that oblong; carboniferous rocks, variously lower and upper, the latter inclusive of the coal measures, form considerable tracts of the great oblong, all N of Shepton Mallet and Wells; lower greensand forms a tract around Wedmore; and alluvial deposits form considerable tracts along the Axe and the Brue, to the coast and northward. The chief useful minerals are iron ore, lead ore, calamine, manganese, coal, lime, ochre, fullers' earth, and building stone. There are mineral springs at Bath, Castle Carey, Queen Camel, Weston-super-Mare, East Chinnock, Nether Stoney, Alford, Ashill, Wells, Glastonbury, and Wellington.

The soil of the alluvial flats varies from moss to deep strong clay; that of the adjacent slopes is chiefly calcareous sand; that of Taunton vale is prevailingly a rich loam; that of other valley grounds is variable, but mostly fertile; and that of the hills and moors ranges from deep loam to thin poor gravel. The estates and the farms are well divided. The chief crops are wheat, oats, barley, beans, and potatoes. Orchards abound, and market gardens are numerous. Much butter and cheese are made. The latter is chiefly known as Cheddar. The cattle are chiefly Devons, Herefords, and shorthorns, and the sheep are Southdowns, Leicesters, or crosses between these and the Cotswolds.

The county is well supplied with railway accommodation by the Great Western and Somerset and Dorset Joint lines. By means of the latter there is direct communication with the Midland and London and South Western systems. The canals are the Kennet and Avon and the Taunton and Bridgwater.

The county is divided for parliamentary purposes into seven divisions. It also includes tlie parliamentary boroughs of Bath and Taunton and part of the parliamentary borough of Bristol. It includes six municipal boroughs (exclusive of the county borough of Bath), viz., Bridgwater, Chard, Glastonbury, Taunton, Wells, and Yeovil. The county has one court of quarter sessions. The boroughs of Bath, Bridgwater, Wells, and Yeovil have separate commissions of the peace, and the boroughs of Bath and Bridgwater have, in addition, separate courts of quarter sessions. The county contains 474 entire civil parishes and parts of three others, and the county borough of Bath contains six entire civil parishes. The county contains 501 entire ecclesiastical parishes or districts and parts of three others, and is situated partly in the dioceses of Bath and Wells, Gloucester and Bristol, and Salisbury.

The parliamentary divisions each return one member to the House of Commons. The particulars for Bridgwater,. Frome, and Wells divisions are given under these names, and the following are those for the other four divisions:—

The territory now forming Somerset belonged to the Belgæ; was included by the Romans in their Britannia Prima; became part of the Saxon Wessex; suffered severely from the Danes, and gave refuge to Alfred from their incursions; and was the scene, at later periods, of the battles of Sedgemoor and Lansdown, and the sieges of Bristol, Bridgwater, and Taunton. The title of Earl of Somerset, along with sixty-one lordships in the county, was given by William the Conqueror to Sir W. Mohun; descended to his posterity, was transmuted into the title of Duke in 1442, and was revived by James I. in favour of his minion Robert Carr. The title of Duke of Somerset became attainted in 1472; was afterwards given successively to the third son of Henry V., to an illegitimate son of Henry VIII., and to Protector Seymour; became attainted at the Protector's condemnation, and was restored, in 1660, to the Protector's great grandson, the Marquis of Hertford. Druidical circles are at Stanton-Drew, Monkton-hill, Withycombe, and Chew magna; British camps at Leigh-down, Ashton, Doleberry, Bleadonhill, Maesknoll, Portbnry, Banwell, and Worlehill; Roman camps at Doleberry, North Cadbury, Hawkridge, Douxborough, Banwell, Bowditch, Modbury, Neroche, and about thirteen other places; Saxon or Danish camps at Wiveliscombe, Porlock, and about eight other places, and an enormous tumulus at Uphill. The Roman Fosse Way and other Roman roads have left vestiges, and many Roman monuments of great interest have been found at Bath, Cadbury, Portbnry, Ilchester, and other places. Old abbeys or interesting remains of them are at Glastonbury, Bath, Wells, Keynsham, Hinton, Banwell, Bruton, Muchelney, and Athelney, and old churches, or parts of them, with artistic features, at Uphill, Cannington, Dunster, Stogursey, Taunton, Compton-Martin, Christon, and Portbury.

The Chapman code for Somerset is SOM.
Chapman codes are used in genealogy as a short data code for administrative areas, such as county and country names.

The parish registers for the Diocese of Bristol are available online at Ancestry, in association with Bristol Archives.

The Historical Directories web site have a number of directories relating to Somerset online, including:
Kelly's, Pigot, Slater, etc.

We have Pigot & Co.'s Directory of Somersetshire, 1830 available to browse.

We have Slater's Commercial Directory of Somersetshire, 1852 available to browse.

We have transcribed the entry for Somerset from the following:

Old map of Somerset circa 1895 (Gazetteer of England and Wales) 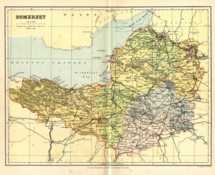