Winterborne Stickland, a parish, with Winterborne Quarlestone tithing, in Dorsetshire, 3½ miles WSW of Blandford station on the Somerset and Dorset Joint railway. It has a post office, of the name of Stickland, under Blandford; money order and telegraph office, Whitechurch. Acreage, 2234; population, 406, Mailing is carried on. The living is a rectory in the diocese of Salisbury; net value, £255. The church is good, and there are two Methodist chapels.

The parish register dates from the year 1616, but some years are missing. The original register books are now deposited with the Dorset Archives Service, but have been digitised by Ancestry.co.uk and made available on their site (subscription required). 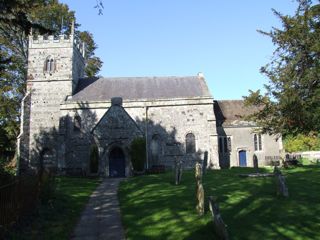 The parish church of St. Mary, situated nearly in the centre of the parish, is an ancient edifice of flint and stone, in the Transitional style, consisting of chancel, nave, south porch and an embattled western tower, with pinnacles, containing 4 bells: the church was restored in 1891-2, at a cost of £726 14s. under the direction of Mr. Fletcher F.R.I.B.A. or Wimborne, and re-opened 29 March, 1892; in the course of the work portions of an old oak waggon-headed roof were discovered in the chancel, and these have very carefully been restored and made good; part of a carved oak screen was also found behind the wooden lining of the doorway leading to the mausoleum of the Skinner family, betwen the chancel and the chapel, and this has been restored and left in the position in which it was discovered; an interesting discovery was also made of a rude sculpture of the Holy Rood, found built into the east wll of the porch: there are 134 sittings.

Online maps of Winterborne Stickland are available from a number of sites: