Winterbourne St Martin, a parish, with Martinstown village and Ashton tithing in Dorsetshire, 3 miles W by S of Dorchester station on the G.W.R. It has a post office of the name of Martinstown, under Dorchester; money order office, Winterbourne Abbas; telegraph office, Dorchester. Acreage, 3546; population, 393. It formerly had a weekly market, and still has a fair on St Martin's Day. Maiden Castle, noticed in our article on Dorchester, is here, and many tumuli are on Four Barrow Hill and Clandon. The living is a vicarage in the diocese of Salisbury; net value, £80. The church is dedicated to St Martin.

The parish register dates from the year 1653. The original register books are now deposited with the Dorset Archives Service, but have been digitised by Ancestry.co.uk and made available on their site (subscription required). 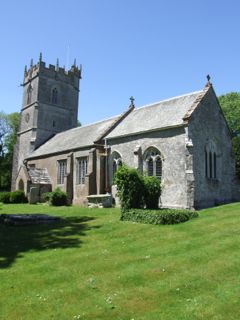 The parish church of St. Martin is an ancient edifice of stone, in mixed styles, consisting of chancel, nave, south aisle, south porch and an embattled western tower, with pinnacles, containing one bell: two ancient stone shafts are placed on either side of the altar, and there is an ancient Norman font: the eastern end appears to have been rebuilt at a much later period than the remainder of the church: the restoration of the church, commenced in 1896, was completed in 1907: there are 250 sittings.

We have transcribed the entry for Winterborne St Martin from the following:

Online maps of Winterborne St Martin are available from a number of sites: