Winfrith Newburgh, a parish, with Winfrith village and three hamlets, in Dorsetshire, 3 miles SW of Wool station on the L. & S.W.K., and 8 WSW of Wareham. It has a post, money order, and telegraph office under Dorchester. Acreage, 5015; population, 869. There is a parish council consisting of nine members. A seat of the Newburghs was here. The living is a rectory in the diocese of Salisbury; net value, £300 with residence. Patron, the Bishop of Salisbury. The church is an ancient structure of stone with an embattled western tower with six bells, and has been restored. A chapel of ease is at Burton. Bishops Lindwood and Atkyns were rectors.

The parish register dates from the year 1585. The original register books are now deposited with the Dorset Archives Service, but have been digitised by Ancestry.co.uk and made available on their site (subscription required).

The parish church of St. Christopher is an ancient edifice of stone, consisting of chancel, nave, north aisle, south porch and an embattled western tower, containing 6 bells: the north doorway and some other portions are Norman: the church was restored and enlarged in 1854, and now affords 400 sittings: an organ chanber was added in 1914 in memory of the Rev. S. W. M. Nash M.A. rector 1889-1913. 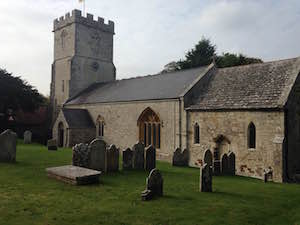 We have transcribed the entry for Winfrith Newburgh from the following:

Online maps of Winfrith Newburgh are available from a number of sites: