Shropshire or Salop, an inland county of the W of England, is bounded on the NW by Denbighshire, on the N by Flintshire and Cheshire, on the E by Staffordshire, on the S by Worcestershire, Herefordshire, and Radnorshire, and on the W by Montgomeryshire and Denbighshire. Its outline has numerous irregularities, but is not far from being oblong. Its boundaries are chiefly artificial. Its greatest length from N to S is 48 miles; its greatest breadth is 41 miles; its circuit is about 220 miles, and its area is 859,516 acres. Its surface has been described as "possessing every variety of natural charm, the bold and lofty mountain, the woody and secluded valley, the fertile and widely-cultured plain, the majestic river, and the sequestered lake." The N and NE half for the most part is a plain, agreeably diversified by wooded vales and a few isolated hills, while the other half, especially toward the W, assumes a resemblance to the mountainous character of Denbighshire and Montgomeryshire. The chief heights are the Wrekin, near Wellington, 1320 feet high; the Clee Hills in the SE, 1805 feet high; and the Long Mynd in the SW, 1674 feet high. The chief rivers are the Severn, bisecting the county nearly through the middle; the Vyrnwy, running on part of the western boundary to the Severn; the Tern and the Worf, running to the Severn respectively near Atcham and Bridgnorth; the Teme, running along much of the S boundary, and receiving the Clun, the Onny, and the Corve from the interior; and the Dee, running along a small part of the NW boundary. The chief lakes are Ellesmere, Whitemere, Colemere, Avesmere, and Mereton Mere. Trias rocks of various kinds prevail in the N, permian and lias rocks occupy small tracts in the N, carboniferous rocks occur in the E, Silurian and Devonian rocks prevail throughout the S, and eruptive rocks occur in some of the hills. Coal is worked chiefly in the Coalbrookdale coalfield, lying between Much Wenlock, Wellington, Lilleshall, and Shifnal, but the product has greatly diminished of recent years and shows signs of exhaustion. The Forest of Wyre, the Leebotwood, the Shrewsbury, and the Clee Hills coalfields are unproductive. Ironstone is raised chiefly in the Coalbrookdale coalfield, and is used in the ironworks of the district. Lead is found in the western portion of the county, the most prolific mine being the Snailbeach, near Minsterley. Lead-mining was probably carried on here by the Romans. Copper is worked to a slight extent near Grimshill. Limestone of quality resembling marble, is quarried near Oswestry, Ludlow, and Orton; slate at Selattyn, Purslow, and Clun; and good building-stone at Grimshill and other places.

The soils are prevailingly light and sandy in the N, and loamy or clayey in the middle, and generally are fertile. The chief crops are wheat, barley, pease, turnips, and grasses, and subordinate crops in some places are oats and hops. The meadows near the Severn are very fertile. Excellent dairies are in the parts nearest the great towns of Staffordshire, but the dairies in other parts are inconsiderable. The cattle reared for the market are of the improved Leicester, Lancaster, and Cheshire breeds, and those on the dairy-lands are of mixed breeds. The sheep are generally of no particular breed, yet include a peculiar horned kind similar to the Southdown. Horses of good quality are bred. Large hogs are fattened, and turkeys are bred. Many fine orchards are in numerous parts, particularly in the S, and plantations of oak, ash, and beech are aggregately considerable. Estates and farms in general are well divided, but some are very small.

The mineral trade in the carboniferous region is extensive, and manufactures of earthenware, porcelain, encaustic tiles, flannel, carpets, linen thread, tobacco pipes, and paper are carried on, and mailing is on a considerable scale.

The Shropshire Union canals give important facilities of communication to the N half of the county, which is well supplied with railway communications. Taking Shrewsbury as the centre, the G.W.R. and L. & N.W.R. have three joint lines, one running S viâ Craven Arms to Hereford, another running to a junction with the Cambrian railway at Buttington, and another running E to Wellington. The L. & N.W.R. has also an important line running N to Crewe, while the G.W.R. has lines running NW to Wrexham and SE to Worcester. From Wellington the L. & N.W.R. has an important line to Stafford, while the G.W.R. has lines N to Market Drayton and E to Wolverhampton. The Cambrian railway crosses the NW corner of the county, while the North Staffordshire railway penetrates the NE corner to Market Drayton.

Shropshire is governed by a county council, consisting of 17 aldermen and 51 councillors; is in the NW military district, and in the Oxford judicial circuit; and forms part of the dioceses of Hereford, St Asaph, and Lichfield. The assizes and the quarter-sessions are held at Shrewsbury. H.M. Prison and the Salop Infirmary are at Shrewsbury, and the Salop and Montgomeryshire Lunatic Asylum is at Briton Heath, near Shrewsbury. For parliamentary purposes the county is divided into four divisions, each returning one representative to the House of Commons; the Western or Oswestry division, the Northern or Newport division, the Mid or Wellington division, and the Southern or Ludlow division. Shrewsbury is a parliamentary borough, returning one member. Population in 1801,169,248; in 1821, 198,311; in 1841, 225,820; in 1861, 240,959; in 1881, 248,014; in 1891, 236,339.

The territory now forming Shropshire was inhabited by the ancient British Cornavii and Ordovices; was partitioned by the Romans into part of their Flavia Cæsariensis and part of their Britannia Secunda; became part of Powisland, and afterwards part of Mercia; was nearly all given by William the Conqueror to Roger de Montgomery; was the scene of many struggles between the Normans and the Welsh till the time of Edward I.; and thenceforth witnessed only such important public events as are noticed in our articles on Shrewsbury, Ludlow, and other principal places. The Roman Watling Street enters from Staffordshire at Weston Park, goes westward to Wroxeter, sonth-west-by-southward thence to Church-Stretton, and south-by-westward thence into Herefordshire near Leintwardine. Roman stations were at Uxacona or Oakengates, Uriconium or Wroxeter, and Rutunium or Buyton; and ancient camps were at the Walls, Bury-Ditches, Bury Walls, Borough Hill, Brocards Castle, and Bucknell. Offa's Dyke and Wat's Dyke run along much of the W border. Old castles are at Shrewsbury, Bridgnorth, Ludlow, Hopton, Stoke, Clun, Oswestry, Cawse, Whittmgton, Knockin, Red Castle, and Acton-Burnell. Old abbeys or their remains are at Shrewsbury, Hanghmond, Buildwas, Wenlock, and Lilleshall; old priories at Bromfield and Whiteladies ; and old churches at Chirbury and Tonge.

The Chapman code for Shropshire is SAL.
Chapman codes are used in genealogy as a short data code for administrative areas, such as county and country names.

We have a database containing transcripts of marriage records for some parishes in Shropshire.

The Historical Directories web site have a number of directories relating to Shropshire online, including:
Kelly's, Pigot, Slater, etc.

We have transcribed the entry for Shropshire from the following:

Old map of Shropshire circa 1895 (Gazetteer of England and Wales) 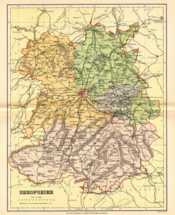