Sturminster Newton, a small town and a parish in Dorsetshire. The town stands on the river Stour, with a station on the Somerset and Dorset railway, 120 miles from London, and 8½ NW of Blandford. It has a post, money order, and telegraph office under Blandford. Dating from very early times, it is a seat of petty sessions, and has two banks, two chief inns, remains of a castle and a market cross, a six-arched bridge, a church rebuilt in 1827, a literary institution, national schools, a workhouse, a fortnightly market on Mondays, and fairs on 12 May and 24 Oct. Acreage of parish, 4546; population, 1863. The manor was given by Alfred to his son Ethelwald, passed to Glastonbury Abbey, formed part of Catherine Parr's dower, and was given by Elizabeth to the Hattons. The living is a vicarage in the diocese of Salisbury; gross value, £750 with residence. The church is a building of stone in the Perpendicular style, and was partially restored in 1884. There are Primitive Methodist and Wesleyan chapels.

The parish register of baptisms, marriages and burials begins in 1601. The original register books are now deposited with the Dorset Archives Service, but have been digitised by Ancestry.co.uk and made available on their site (subscription required).

We have transcribed the Marriages at Sturminster Newton from 1837-1921.

The church of St. Mary, erected in 1486 by one of the last abbots of Glastonbury, was almost entirely rebuilt and considerably enlarged in 1827 at the sole expense of the Rev. Thomas Henry Lane Fox M.A. a former vicar, and is a building of stone in the Perpendicular style, consisting of chancel with aisles, nave of three bays, aisles, transept, south porch, and a western tower, with pinnacles, containing a clock and 6 bells: the stained east window was erected in 1865 as a memorial to William Loftus Lowndes; the west window, erected in 1886, is a memorial to Mrs. Lowndes, and was designed and executed by Miss Lowndes: a new stained window was erected in memory of the late Rev. Canon Richard Lowndes M.A. vicar here 1862-98, executed by his daughter, Miss Lowndes, and presented by his son, Mr. George Lowndes: in 1884 the church was reseated and the interior restored at a cost of £600: new oak choir stalls and clergy desks were provided in 1902: an oak screen has been placed in the north aisle to the memory of the late Mr. Dashwood; a fine new organ was presented by Mr. Dashwood in memory of his wife: there are 580 sittings.

Sturminster Newton was in Sturminster Registration District from 1837 to 1974

We have transcribed the entry for Sturminster Newton from the following:

Online maps of Sturminster Newton are available from a number of sites: 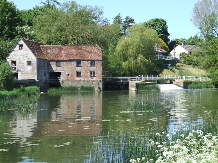