Sherborne, a town, a parish, and a division in Dorsetshire. The town stands on a hill-slope, with a station on the L. &S.W.R., 118 miles from London, and 5½ E of Yeovil. It has a post, money order, and telegraph office. Acreage of parish, 6497; population, 5690. There is an urban district council consisting of twelve members, also a rural district council for the outlying parts. Sherborne was known to the Saxons as Sciraburn, acquired an abbey or minster before 700, was the seat of a bishopric from 705 till 1075, when the see was removed to Old Sarum. There was a Saxon cathedral, one small fragment of which was built into the W wall of the abbey. It suffered devastation by Sweyn the Dane in 1003, was given by William the Conqueror to Osmund de Sels, afterwards Bishop of Sarum, who built a castle at it, passed to successively the Crown, the Montacutes, the Duke of Somerset, Sir Walter Raleigh, Prince Henry, and the Digbys, sent members to parliament in the time of Edward III., became an important seat of trade before the time of Henry VIII., was described by Leland as in his time " the most frequented town in the county," sustained a siege of sixteen days by Fairfax in 1645, resulting in capture and in the demolition of its castle, and gave lodging for a night to the Prince of Orange on his way to London in 1688. It numbers among its natives Bishop Winniffe, who died in 1584; the engineer Engelbert, who died in 1634; and the theologian Dr Towers, who died in 1799. The town comprises several good streets regularly aligned, the principal one winding in a picturesque-manner. There is a market-place with an ancient conduit. The town has a head post office, two banks, three chief inns, a splendid church, a grammar school endowed with about £1200 a year, which ranks among the greatest public schools, three other endowed schools, an ancient endowed almshouse hospital, a handsome hospital called Yeatman's, erected in 1865, a workhouse, and some general charities. Ruins of the castle still exist to the E on an eminence near the town. A mansion called Sherborne Castle stands near the ruins, consists of a centre and two projecting wings, presents a quaint and antique appearance, and is the seat of the Digby family. The park is very extensive, beautifully wooded, and well stocked with deer. It contains a lake 2 miles long, which is always open to the public for skating when frozen over. The church is that of the ancient abbey. It became the parish church after the dissolution of the monasteries. It was originally a building of Norman architecture, but was converted to its present mainly Perpendicular character by Abbots Ramsam and Bradford. Much Norman work still remains, notably the piers of the tower and the SW porch. The roof is one of the most beautiful specimens of fan vaulting extant. It underwent complete restoration partly in 1849-50, partly in 1856-58, when the tower was restored; received further improvement in 1886, presents an appearance similar to that of several cathedrals, is cruciform with a tower 100 feet high, and measures 200 feet from E to W, and 100 along the transepts. In 1884 a magnificent monument was erected to the memory of George Digby Wingfield Digby, of Sherborne Castle, in the form of an Eleanor Cross, which is placed in the abbey yard on the site of the old town-hall, and stands on octagonal steps. The monument is of Ham Hill and Ketton stone, with bronze figures, and a medallion portrait in bronze of Mr Digby. Some remains of a Benedictine abbey, constituted out of the original monastery in 1139, are on the N side of the churchyard, and consist chiefly of the refectory, crypt, and other buildings used for the grammar school. The latter, as an institution, dates from 1550, as an edifice is a quadrangular structure, and has been restored and enlarged. The ancient hospital was refounded by Henry VI. for 16 men and 8 women, and is a venerable structure. There are Congregational, Baptist, and Wesleyan chapels. Markets are held on Thursdays and Saturdays, but are practically nil. Fairs are held on or near St Swithin's Day and the Monday after 10 Oct., and there are silk-throwing mills employing about 250 persons. The town comprises part of Sherborne parish and all Castleton parish. The living is a vicarage in the diocese of Salisbury; gross value, £350 with residence.

The parish register dates from the year 1538. The original register books are now deposited with the Dorset Archives Service, but have been digitised by Ancestry.co.uk and made available on their site (subscription required).

The existing church consists of choir and presbytery of three bays, with aisles and clerestory and five chapels, nave of five bays with clerestory, aisles, chapel, transepts, south porch and a central tower of two stages: the choir and presbytery, Perpendicular, have peculiar fan-traceried vaulting, richly gilt, and decorated with shields of arms and foliage work; one of the bosses of the nave graining is carved with a fiery arrow, indicating the manner in which the church was set on fire: stone traceried screens modelled from fragments of the original screens divide the choir from its aisles: the stalls and canopies have been restored: the east window exhibits in its glass the three orders of Martyrs, and the clerestory windows are stained: the reredos, of Caen stone, designed by Mr. R. C. Carpenter, is enriched with carvings of "The Last Supper" and "The Ascension," executed by Forsyth; eastward of the presbytery is the Lady chapel, originally of three bays, and south of it the chapel of St. Mary le Bow, both of which until lately formed part of the head master's house: the restoration of these two chapels was completed in 1927 at a cost of £6,000: during this work many interesting features, hidden in 1560, came to light, including some 15th century panelling, and a large number of fragments of carved stone work: the ante chapel is enclosed by oak memorial screens given by the 6th Dorsetshire Regiment, and contains the colours of all battalions and the regimental Book of Remembrance; other oak screens were presented by the women of Sherborne and the Sherborne Girls' School; at the entrance to the Bow chapel is a fine stone screen completed as a memorial of the Great War by the Freemasons of Dorset: on the floor of the ambulatory is a brass with inscription, placed over the grave of Ethelbald and Ethelbert, brothers of King Alfred the Great, and both kings of West Wessex: in the choir is a brass to the and Earl Digby, who died May 12, 1856, when the earldom became extinct; there is also a memorial to Beatrix (Walcot), wife of John, first Earl of Bristol; she died in 1658, and another to Walsingham Gresley, d. 1633.

The north choir aisle contains a fragment of the tomb of Abbot Clement, 1163, dug up in the churchyard about 1860; it includes the head of the effigy and a portion of a pastoral staff, and is encircled by an inscription: there is also a much mutilated 13th century figure, probably that of Abbot de Robert: Bishop Roger's chapel, an Early English work, and now used as a vestry, is entered from this aisle, and contains monuments collected from the nave and choir: the Wickham chapel adjoins it on the west, and is entered from the north transept: the ceiling is vaulted, and the south and east walls are relieved by arcading; in this chapel is the restored tomb of Sir John Horsey, knight, 1546, and his son, 1564: in the south choir aisle is the effigy of Abbot Laurence, of Bradford, 1246. Attached to the south choir aisle is the chapel of the Holy Sepulchre, with a groined roof and piscina. St. Catherine's or the Leweston chapel, in the south nave aisle, is also vaulted and contains a canopied tomb, with effigies to John Leweston esq. 1584, and Joane his wife, 1597, erected by Sir John Fitzjames, knight: the windows in this chapel contain valuable 15th and 16th century glass taken from the choir windows in 1856.

In the north transept, which is boldly groined, and displays the finest bosses in the church, is placed the organ, erected in 1856; the south transept has a roof of Irish oak, with gilt bosses, brought from Ireland by the Earl of Bristol: the stained window illustrating the Te Deum, was designed by A. W. Pugin; here is a marble monument by J. Nost to John, third and last Earl of Bristol, who died September 12, 1698; and a tablet to two children of William Lord Digby, with inscription by Pope.

In 1911 a brass tablet was erected in memory of Col. Percy Browne, who was a passenger in the S.S. "Waratah," which was lost with all hands in July, 1909.

The nave, five bays in length, Perpendicular, has a very fine vaulted roof, described at length by the late Rev. J. L. Petit, in the Arch. Soc. Pub. 1850; the north aisle contains four windows, which are reproductions of the original Decorated windows; in the south aisle is a memorial window to George Medd Butt esq. formerly M.P. for Weymouth, and a native of Sherborne, and near is a bronze tablet bearing the names of the officer's and men of the Dorset Yeomanry who fell in the Great War.

The piers and arches of the tower are Norman, and broader from north to south, than from east to west; the upper stage is Perpendicular, and receding on a set-off; it is at present 109 feet in height, with two windows, divided by buttresses, in each face, but was in 1885-86 completely restored from the designs of Messrs. Carpenter and Ingelow, architects, at a cost of £4,000: much of the work has been rebuilt, and the parapet entirely renewed, with twelve crocketed pinnacles, instead of the former six, in accordance, it is believed, with the original design of Abbot Bradford. The tower contains a clock and ring of eight bells, of which the tenor, weighing 46 cwt. 23 lb. and recast in 1865, was brought from Tonrnay and presented to the church by Cardinal Wolsey. The first and second bells were added by subscription in 1858 as a testimonial to the munificence of the late Mr. Digby; there is also a sanctus bell, and a fire bell of 1652.

The nave and transepts were restored in 1851, at a cost of £13,868, and the choir in 1858, at an outlay of £17,847: of the total amount nearly £18,000 was given by the late George Digby Wingfield-Digby esq. and about £8,000 by the last Earl Digby. In 1898 the roofs of the Lady and Bow chapels were restored at the expense of the late J. K. Digby Wingfield-Digby esq. M.P. of Sherborne Castle, and at the same time the plastering of the north transept was removed, exposing the original Norman work. The restoration of the Lady chapel, once used as the private house of the head master of Sherborne School, was completed in 1934, and re-dedicated by the Bishop of Salisbury on May 29th of that year, in the presence of six other bishops. The total length of the church is 215 (once 241) feet; width, 60 feet; length of the transept, 95 feet; height, about 60 feet. The remains of the abbey buildings now form part of the Sherborne School: the abbey has sittings for 1,600 persons. 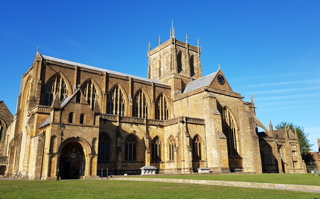 We have transcribed the entry for Sherborne from the following:

Online maps of Sherborne are available from a number of sites: