Shaftesbury, a market town, a municipal borough, and three parishes in Dorsetshire. The town stands 2¾ miles SSW of Semley station on the L. & S.W.R., and 11½ N of Blandford. It is alleged by Holinshed to have been founded about 1000 years before the Christian era, by Brampton to have been founded in the time of Julius Caesar, and was known to the ancient Britons as Caer Palladwr, to the Saxons as Scaeftesbyrig, and at Domesday as Sceptesberie. It is now sometimes called Shaston, is conjectured to have been a Roman station, was either restored or built about 888 by Alfred, acquired then a great Benedictine nunnery, which gave it high and long importance, was made a mint town by Athelstan, suffered devastation in 1003 by the Danes, had three mints in the time of Edward the Confessor, and twelve churches at Domesday, acquired an hospital of St John before the time of Richard II., was given by Edward VI. along with its nunnery to the Wriothesleys, passed to successively the Arundels, the Herberts, and the Ashley Coopers, went into decadence after the Reformation, gives the title of Earl to the family of Cooper, and numbers among its natives Oram the poet, and Granger the author of the " Biographical History of England." It occupies the crown of a steep narrow ridge of chalk hill, terminating on the W in a projection called the Castle Hill, and consists of narrow and irregular but well-built streets. It is a seat of petty sessions and county courts, and has a head post office, two banks, two chief inns, a town-hall, a corn-market, a market house, a temperance hall, three churches, a Roman Catholic chapel, a literary institution with public reading-room, a clerical library, two endowed schools, a workhouse, two suites of almshouses, and other charities. The Westminster Memorial Cottage Hospital is a handsome structure of stone, erected to the memory of the late Marquis of Westminster, opened in 1874, and contains twelve beds. The ancient nunnery received the remains of Edward the Martyr after his murder in Corfe Castle, was the death-place of Canute and the prison of Bruce's wife, and has left scarcely any vestiges, except a portion of the wall of its park. Trinity Church was rebuilt in 1841, and St James' Church in 1866. St Peter's Church is of the 15th century, much modernised, and has highly ornamented outer walls; but the building has not been used for many years owing to the interior being considered unsafe. There are Congregational and Wesleyan chapels, and two meeting-houses for the Society of Friends. A weekly market is held on Saturday, and fairs on the Saturday before Palm-Sunday, the last Saturday of Aug., and 23 Nov. The town is a borough by prescription, was first chartered by Elizabeth, sent two members to Parliament from the time of Edward I. till 1832, afterwards only one, when in 1885 it was merged in the northern division of the county, and is governed by a mayor, 4 aldermen, and 12 councillors, who act as the urban district council. Area of the municipal borough, 156 acres; population, 2122; of the parish of Holy Trinity, 353 acres; population, 907; of St Peter, 72 acres; population, 801; of St James, 1798 acres; population, 950. The parishes are Holy Trinity with St Peter, and St James, the last including Alcester liberty. The livings are rectories in the diocese of Salisbury, and those of Holy Trinity and St Peter are united; net value of Holy Trinity with St Peter, £160 with residence; of St James, £220 with residence. Patron, the Earl of Shaftesbury.

The registers of St. Peter's date from 1623. The original register books are now deposited with the Dorset Archives Service, but have been digitised by Ancestry.co.uk and made available on their site (subscription required).

The church of St. James, in the liberty of Alcester, which is that part of the old parish of St. James not within the municipal limits, is an edifice of greenstone with Bath stone dressings, in the Decorated style, and was rebuilt in 1866-67, at a cost of £3,350: it consists of chancel, nave, aisles, vestry, north porch and an embattled western tower 65 feet in height, with four pinnacles, and containing a clock and 6 belIs: the pulpit is of oak, elaborately carved: a stained memorial window was placed in thechancel in 1884, and there are several other stained windows: the interior is fitted with open benches, and will seat 440 people.

St. Peter's, in the High street, and the most ancient of the three existing churches, is a building of stone dating from the latter part of the 15th century, and consists of chancel, nave and a western tower containing 6 bells: the church has been but little used since 1878, but occasional services are now held during the summer months: the tower has in later years been thoroughly repaired, at a cost of £700, and in 1897 the church was refloored and seated with chairs, and further restorations were made in 1909.

The parishes of Holy Trinity and St. Peter are consolidated. 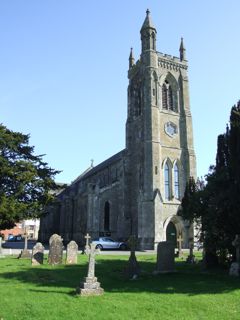 Holy Trinity church, in Bimport street, rebuilt on the old site in 1842, chiefly in the Early English style, consists of chancel, nave, aisles, north and south porches and an embattled western tower, 100 feet in height, with pinnacles, and containing 6 bells: the organ was presented by the late George Thomas esq.: the church will seat, including the galleries, 854 persons: the organ was reconstructed and chancel stalls provided in 1901, at a cost of about £200: in 1908 the chancel was erected and an east stained window inserted, at a total cost of nearly £1,000: a carved oak screen was presented by T. G. Pinney esq. mayor 1909-10: the churchyard contains three handsome avenues of lime trees, shading most of the walks through the burying ground and approaches to the church.
The parishes of Holy Trinity and St. Peter are consolidated.

Holy Trinity church is now (2010) de-consecrated and no longer used as a church.

Shaftesbury St. James was in Shaftesbury Registration District from 1837 to 1894

Shaftesbury St. Peter was in Shaftesbury Registration District from 1837 to 1894

We have transcribed the entry for Shaftesbury from the following:

Online maps of Shaftesbury are available from a number of sites: