Marnhull, a village and a parish in Dorsetshire. The village stands 1 mile E of the river Stour, 1½ SE of the boundary with Somerset, and 3 miles N of Sturminster Newton station on the Somerset and Dorset Joint railway. It is large and irregularly built, and has a post, money order, and telegraph office tinder Blandford. The parish contains also the hamlets of Moorside, Hayes, Lambress, and Thorley. Acreage, 8838; population, 1415. Nash Court is the chief residence; it was the birthplace of Giles Hussey, the ingenious painter who drew by the musical scale; and contains some choice paintings of the old masters. The living is a rectory in the diocese of Salisbury; net value, £530 with residence. The church is large and good, and has a tower; it was rebuilt in 1882. There are Congregational, Wesleyan, and Methodist chapels, and a Roman Catholic church. Brewing and malting are carried on.

We have transcribed the 1841 and 1901 census returns for Marnhull

The parish register dates from the year 1559. The original register books are now deposited with the Dorset Archives Service, but have been digitised by Ancestry.co.uk (£) and made available on their site (subscription required).

We have transcribed the Marriages at Marnhull from 1837-1921. 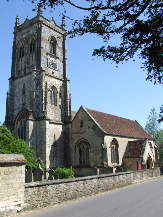 The parish church of St. Gregory is a building of stone, chiefly in the Early English style, and consists of chancel, nave of four bays, south porch, and an embattled western tower, with pinnacles, containing a clock and 6 bells, two of which were recast and the whole rehung, and a clock was placed in the tower in 1887: a memorial window has been erected by the Misses Senior to their parents: the stained east window, by Burne-Jones, was given by his late widow in memory of the late R.B. Kennard esq. J.P.; the old east window, now removed to another place in the church, was the gift of the Rev. R.B. Kennard, rector 1858-95, who also inserted two windows in the chancel, one to his first wife, d. 1878, and the other to his second wife, d. 1897; there is also a window given by Mr. John Hunt as a memorial to his wife, who died 13 Feb. 1894: the chancel was rebuilt in 1882, and in 1898 part of the church was restored, revealing several features of interest hitherto covered up: an organ chamber was built and a new organ provided in 1900: there are 650 sittings. The churchyard was enlarged in 1902, the additional land being the gift of Lord Stalbridge.

Marnhull was in Sturminster Registration District from 1837 to 1974

We have transcribed the entry for Marnhull from the following:

Online maps of Marnhull are available from a number of sites: