Rutland or Rutlandshire, an inland county, the smallest in England, bounded on the N and the NE by Lincolnshire; on the SE and the S by Northamptonshire; on the SW, the W, and the NW, by Leicestershire. Its outline is irregular, and its boundary with Northamptonshire is traced by the river Welland, and with part of Leicestershire by the river Eye. Its greatest length, south-south-westward, is 17 1/2 miles, its greatest breadth is 14 1/2 miles, its circuit is about 33 miles, and its area 97,273 statute acres. The surface is finely diversified, exhibits gentle swells and depressions, and has elevations extending E and W, and divided by pleasant vales. One range runs to the NE of Oakham, other ranges flank the Welland and the Eye, and the rich vale of Catmos is in the NW. The chief streams besides the Welland and the Eye are the Gwash and the Chater. Lias and lower lolite rocks occupy the whole area, the former chiefly in the W, the latter chiefly in the E. Limestone is plentiful, and both it and freestone are quarried for building. Mineral springs are at Normanton, Martinsthorpe, Hambledon, Lyndon, and Luffendon.

Little of the land is waste, nearly 300 acres are under wood, and a larger aggregate, proportionally to the entire area, is disposed in parks and lawns than in almost any other county in England. The soils are various but generally fertile. Those in the E and the SE are mostly shallow clay, on limestone rock, and those elsewhere are chiefly strong red loam on blue clay. Estates are of various sizes, farms run from 15 acres upwards, and agriculture is principally of the same kind as in Norfolk. Wheat and barley are heavy crops and yield fine seed, turnips are extensively grown, sheep are fed, and Stilton cheese is made.

Manufactures make very little figure. There are extensive woods from which much timber is cut, and there are quarries for limestone and freestone. According to the census returns issued in 1893, the chief occupations of the people of the county were:—Professional, 654 males and 279 females; domestic, 179 males and 1856 females; commercial, 760 males and 10 females; agricultural, 3071 males and 73 females; industrial, 2425 males and 627 females; and "unoccupied," including retired business men, pensioners, those living on their own means, and others not specified, 1452 males and 5787 females; or a total in the county of 8541 males and 8632 females. The number of men employed in the leading industries was as follows:— Agricultural labourers, 1887; farmers, 487; general labourers, 398, and boot and shoe makers, 189. The chief occupations of women were;—Domestic service, with a total of 1566; millinery and dressmaking, 272. There were also in the county 22 blind persons, 15 deaf, 6 deaf and dumb, and 21 mentally deranged.

The county is well provided with railway accommodation, being crossed by the lines of the M.R., L. & N.W.R., and G.N.R. companies. The Leicester and Peterborough branch of the M.R. is from Syston Junction, through Melton Mowbray and Peterborough, and has stations at Ashwell, Oakham, Manton, Luffenham, Ketton, and Stamford. From Manton a line passes also to Kettering, where it joins the main line from London. The L. & N.W.R. have a line which runs along all the SE border of the county, and the G.N.R. crosses the extreme NE of the county, and has stations at Essendine and Ryhall. The river Welland is navigable along the boundary, and the Oakham Canal gives communication to the NW parts with the general system of canals.

The administrative county of Rutland is co-extensive with the ancient or geographical county. The ancient county is not divided for parliamentary purposes, and returns only one member to the House of Commons. It contains no parliamentary borough. The administrative county has one court of quarter sessions, but is not divided into petty sessional divisions, and it includes no municipal borough. The administrative county contains 58 entire civil parishes. The ancient county, which is entirely included in the diocese of Peterborough, contains 41 entire ecclesiastical parishes and districts, and part of one other. It is divided into the hundreds of Alstoe, East Martinsley, Oakham, and Wrangdike. The unions are Oakham and Uppingham. The county town is Oakham, the only other town with more than 2000 inhabitants is Uppingham, and there are about 60 smaller towns, villages, and hamlets. The chief seats are Exton Park, Normanton Park, Cottesmore, Glaston Hall, Burghley, Ayston Hall, Clipsham Hall, Edith Weston Hall, Ketton Hall, Lyndon Hall, Morcott Hall, Preston Hall, South Luffenham Hall, Tickencote Hall, Tixover Grange, and Tolthorpe Hall.

The territory now forming Rutland was inhabited by the ancient British Coritani, was included by the Romans in their Flavia Cæsariensis, formed part of Mercia with the name of Roteland till 827, was given by the Confessor to Westminster Abbey, reverted to the Crown at the Norman Conquest, was then known as Ribale or Rihala, formed part of Northamptonshire or of Notts till the time of Henry III., has never as a separate county made any figure in history, and gives the title of Duke to the family of Manners. Some barrows of the ancient Britons still exist; Roman settlements were at Rankborough, Burley, Stretton, Casterton, Market Overton, and Tixover; Ermine Street, here called Horn Lane, traverses the NE past Casterton and Stretton; an old castle was at Oakham, and old churches are at Essendine, Edith Weston, Ketton, and Tickencote.

The Chapman code for Rutland is RUT.
Chapman codes are used in genealogy as a short data code for administrative areas, such as county and country names.

We have Kelly's Directory of Leicestershire & Rutland, 1928 available to browse.

We have Pigot & Co.'s Directory of Leicestershire & Rutland, 1835 available to browse.

We have transcribed the entry for Rutland from the following:

A searchable transcript of the Return of Owners of Land in 1873 for Rutland is online.

Map of Rutlandshire circa 1848 (Samuel Lewis)

A listing of the Poor Law Unions in Rutland, with the parishes contained in them. 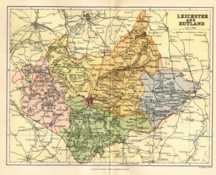