Gillingham, a town, a parish, and a liberty in Dorsetshire. The town stands on the river Stour, near the borders of Wilts and Somerset, 4 miles W of Shaftesbury, and has a station on the L. & S.W.R. 105 miles from London. It has a post, money order, and telegraph office, two banks, a market-house, a drill hall and a lecture hall, a church, three dissenting chapels, a free school, and charities. Acreage of the civil parish, 7739; population, 3033; of the ecclesiastical, 3905. The church, which is partly modern, superseded a very ancient one; and has a fine old chancel and a lofty tower. The free school was founded in the time of Elizabeth, and had the great Earl of Clarendon for a pupil. A weekly market was held every Friday, till the establishment of a cattle market on alternate Mondays. Fairs are kept up on Trinity Monday and 12 Sept. There are flour mills, cheese and butter factories, a large brewery, and manufactures of rope, sacking, and bricks. The manor belongs to the Duke of Westminster. Most of the land is disposed in dairy and grazing pastures. Two forests were anciently here, the one called Gillingham Forest, and connected with Selwood Forest in Somerset; the other is stated to have been called White Hart Forest, from a favourite white hart belonging to Henry I., and they were disafforested in the time of Charles I. An ancient palace of the Saxon and Norman kings, who came hither to hunt, stood till 1278 about half a mile from the town. A victory over the Danes was gained, here by Edward Ironsides in 1016. The living is a vicarage, united with East Stower, West Stower, and Motcombe, in the diocese of Salisbury; value, £300 with residence. Patron, the Bishop of Salisbury. The perpetual curacy of Bourton, and the vicarage of Motcombe-cum-Enmore Green, both of which until recently formed part of the ecclesiastical parish, are now separate benefices.

The parish register of baptisms, marriages and burials begins in 1559. The original register books are now deposited with the Dorset Archives Service, but have been digitised by Ancestry.co.uk and made available on their site (subscription required). 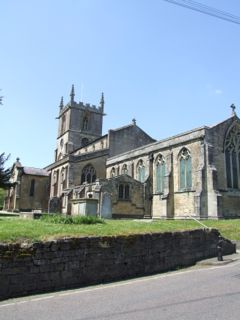 The parish church of St. Mary the Virgin rebuilt, with the exception of the chancel, in 1838, is an edifice of stone in the Decorated and Perpendicular styles, consisting of Decorated chancel with aisles, nave, south porch and a lofty embattled western tower, with pinnacles and containing a clock with chimes, given by the vicar, 1913, and 8 bells, two of which were added in 1894: the tower was restored in 1909: all the windows in the chancel are stained: there is a fine monument, dated 1625, with two recumbent effigies to a former vicar named Jessop, and his brother, a physician who resided in this place; and in the north chancel aisle is a monument to the last co-heiress of the Dirdoe family, dated 1733: the interior of the church was refitted In 1889, and affords about 850 sittings.

We have transcribed the entry for Gillingham from the following:

Online maps of Gillingham are available from a number of sites: