Fontmell, a village and a parish in Dorsetshire. The village stands 4 miles S of Shaftesbury, and 5 N by E of Shillingstone station on the Somerset and Dorset railway. It has a post and money order office of the name of Fontmell Magna, under Shaftesbury; telegraph office, Iwerne Minster. The parish includes also the tithings of Bedchester and Hartgrove, and bears the name of Fontmell Magna. Acreage, 2896; population of the civil parish, 637; of the ecclesiastical, 752. The living is a rectory and a vicarage, united with the perpetual curacy of West Orchard, in the diocese of Salisbury; value, £420 with residence. The church was built in 1864 on the site of a previous edifice, in the Later English style, and is richly ornamented. There is a Wesleyan chapel.

The parish register of baptisms, marriages and burials begins in 1653. The original register books are now deposited with the Dorset Archives Service, but have been digitised by Ancestry.co.uk and made available on their site (subscription required). 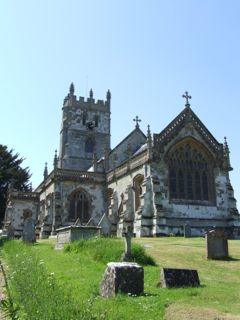 The parish church of St. Andrew, standing on an eminence, is an edifice of stone, principally in the Perpendicular style, and consists of chancel, nave, aisle, south porch, and an ancient and lofty embattled western tower of Norman date, with pinnacles, and containing a clock with chimes and 6 bells: the stained east window was given by the first Lord Wolverton, in 1862, in memory of Sir Richard Plumptre Glyn (who rebuilt the church); the west window is a memorial to George Carr Glyn, 1st baron Wolverton. d. 24 July. 1873; and there are other windows to Maj. Richard Riversdale Glyn, who died and was buried at Aden, in 1859. and Riversdale Robert Glyn, buried at Hastings, in 1829, both sons of the first Lord Wolverton: the church was restored in 1862: there are 250 sittings.

We have transcribed the entry for Fontmell from the following:

Online maps of Fontmell are available from a number of sites: