Beaminster (pronounced Bemminster), a small town and a parish in Dorsetshire. The town stands on the river Brit, near the confluence of its headstreams, among high environing hills, 6 miles from Crewkerne station on the L. & S.W.R., and 6 NNE of Bridport on the Great Western railway. It has a post, money order, and telegraph office. It is a place of considerable antiquity, but it was burnt to the ground by the troops of Prince Maurice in 1644, and again much destroyed by fire in 1684 and in 1781, and it now presents a modern and neat appearance. It has two banks, a hotel, a working men's institute and reading room, a church, a chapel of ease, a Congregational chapel, a Wesleyan chapel, a grammar school, and almshouses with £173, and other charities. The church is Perpendicular in style and large, contains tombs of the Strodes of Parnham, and has been well restored. It has a tower nearly 100 feet high, with curious sculpture on the western side, which was restored in 1862, and again in 1878. A weekly market is held on Thursday, and a fail on 19 Sept. The market-house and other buildings were bought from the Ecclesiastical Commissioners by a local committee and pulled down in 1886, leaving the market-place clear. A good trade exists in double Dorset or Bluevinny cheese. The Rev. T. Hood, father of Lords Hood and Bridport, was master of the free school, and Bishop Spratt the poet, and Russell who defended Warton's History, were natives. The parish includes also the tithing of Langdon. Acreage, 5190; population, 1915. Parnham House, formerly the seat of the Strodes, now the seat of the Oglander family, is an old Tudor edifice, and contains a fine hall, with gallery of portraits. The living is a vicarage in the diocese of Salisbury; net value, £228 with residence. Patron, the bishop.

The parish register of baptisms, marriages and burials begins in 1684. The original register books are now deposited with the Dorset Archives Service, but have been digitised by Ancestry.co.uk and made available on their site (subscription required).

The Phillimore transcript of Marriages at Beaminster, 1585-1812 is online. 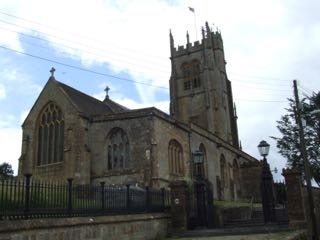 The parish church of the Virgin Mary, standing on an eminence on the south side of the town, is a building of stone chiefly of Perpendicular date, and consists of chancel, nave of five bays, aisles, north porch and an embattled western tower containing a clock and 8 bells, with chimes, which play every three hours; the bells were rehung in 1887: the tower was restored in 1878 and the pinnacles replaced, at a cost of £1,100. There are two monuments to the Strode family, and several mural tablets: there are eleven stained windows, including those to Sir Henry Oglander bart. or Nunwell, Isle of Wight, d. 1874, Sir William Oglander bart. Colonel Cox and Edward Fox esq.: the ancient steps and doorway to the rood-loft still exist. In 1913 a new screen was erected in memory of Rev. A.A. Leonard M.A. vicar 1890-1912: on the south side of the church is a hagioscope. The aisles were newly roofed in 1889, at a cost of £400: the church has sittings for 750 persons.

We have transcribed the entry for Beaminster from the following:

Online maps of Beaminster are available from a number of sites: