Abbotsbury, a large village and a parish in Dorsetshire. The village stands in a vale, about a mile from the sea, and is the terminus of the Abbotsbury branch of the G.W.R. from Weymouth. There is a post, money order, and telegraph office under Dorchester. Acreage, 4872; population, 903. It was formerly a market-town. Most of its inhabitants engage in fishing. The parish contains also the hamlets of Rodden, Elworth, and Luke, and exhibits picturesque features of both shore and surface. The rocks belong to the shelly Oolite. The coast commands brilliant views, and is flanked by Chesil Bank, occasioning tumultuous tides. (See CHESIL BANK.) St Catherine's Chapel, romantically situated on the crown of a bill between the village and the sea, is a very strong edifice of the 15th century, with large buttresses, a clerestory, and an octagonal tower, and serves as a landmark to mariners. A Benedictine abbey was founded at Abbotsbury in 1044 by Orcus, steward of King Canute, and passed at the dissolution to the Strangeways. The gateway of its church, the walls of a dormitory and barn, and some fragments scattered over a large area, still remain. A swannery which belonged to the abbey, and is said to have contained about 8000 swans, still exists, with over 1000 swans, and is connected with a decoy for the capture of wild fowl. A castellated seat of the Earl of Ilchester, the present proprietor, is adjacent. An ancient fortification, 1½ mile to the west, occupies 20 acres, comprises very high ramparts, ditches, and redoubts, and commands a noble view. The living is a vicarage in the diocese of Salisbury; net value, £150. The church adjoins the abbey ruins, and is an old embattled edifice with a curious weather-worn sculpture over the west door; it was reseated and a new organ erected in 1886. There is a Congregational chapel.

We have transcribed the following census returns for Abbotsbury:

The parish register of baptisms, marriages and burials begins in 1795. The original register books are now deposited with the Dorset Archives Service, but have been digitised by Ancestry.co.uk and made available on their site (subscription required). 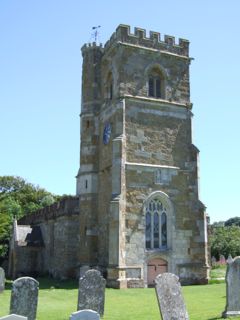 The parish church of St Nicholas is an ancient fabric of stone in the Gothic style, consisting of chancel, nave, aisles, porch, and a fine embattled western tower, containing a clock and 6 bells, rehung in 1898: over the western door is a curious figure emblematic of the Trinity - an old man in a sitting posture, with a crucifix between his knees and a dove at his right ear: the pulpit is beautifully carved: the stained east window was presented by Mary Countess of Ilchester to the memory of her husband, Henry Edward Fox-Strangeways, 5th Earl of Ilchester, d. 1905: the church was reseated in 1886, and affords 450 sittings: in the graveyard are several stone coffins.

Abbotsbury was in Weymouth Registration District from 1837 to 1974

We have transcribed the entry for Abbotsbury from the following:

Online maps of Abbotsbury are available from a number of sites: