Worlington, West, an ecclesiastical parish in Devonshire, united to East Worlington for civil purposes, 4½ miles NE of Lapford station on the L. & S.W.R., and 5½ E of Chulmleigh. Post town, Morchard Bishop. Population, 195. The manor belongs to the baronet family of Stucley. Remains exist of an ancient castle of the Affetons, and in 1868 it was restored by Sir G. S. Stucley, and is used as a shooting box. The living is a rectory in the diocese of Exeter; net value, £120 with residence. The church is an ancient building of stone in the Early English style, and was restored in 1881.

The parish register dates from the year 1683. 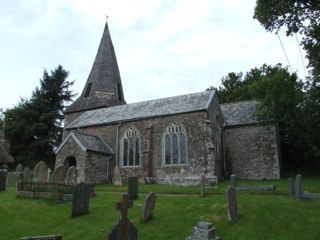 The church of St. Mary is an ancient building of stone in the Early English and Perpendicular styles, consisting of chancel, nave, south porch, and a tower with an oak shingled spire containing 6 bells: in the church is a fine monument to Sir Thomas Stucley kt. ob. September 20th, 1663, whose brother and successor in the Affeton estate, Lewis Stucley, was chaplain to the Lord Protector; the chancel was restored and refurnished in 1881 at a cost of £140, and in 1906 was partially restored at a cost of £650, and completed in 1913 at a further cost of £200: there are 125 sittings.

We have transcribed the entry for West Worlington from the following:

Online maps of West Worlington are available from a number of sites: