Ogwell, West, a parish in Devonshire, 3 miles SW of Newton Abbot station on the G.W.R. Post town, Newton Abbot. Acreage, 706; population, 39. West Ogwell House is the chief residence. The parish is a resort of sportsmen. The living is a rectory in the diocese of Exeter, and was annexed in 1868 to East Ogwell. The church is a neat edifice of nave and chancel, with a tower, and has a carved oak pulpit.

The parish register dates from the year 1681. 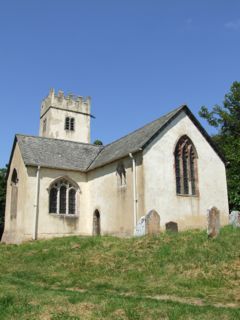 The church (name not known) is a very small building of stone in the Perpendicular style, the interior length, including the belfry, being only 52 feet, and the breadth across the transepts 32 feet; it consists of chancel, nave, transepts, south porch and an embattled western tower containing 3 bells, all apparently cast in 1633: there are three sedilia and an oaken pulpit: the screen, existing here at the beginning of the 20th century, has now disappeared: there are 80 sittings.

We have transcribed the entry for West Ogwell from the following:

Online maps of West Ogwell are available from a number of sites: