Buckland, West, a parish in Devonshire, 6 miles NW of South Molton, and 2 from Filleigh station on the G.W.R. It has a post office under South Molton; money order office, Filleigh; telegraph office, Filleigh railway station. Acreage, 2592; population of the civil parish, 402; of the ecclesiastical, 292. The living is a rectory in the diocese of Exeter; net value, £158 with residence. The church has been almost entirely rebuilt, retains the tower of a previous ancient cruciform church, is in the Decorated English style of the Transition period, and shows elaborate ornature in coloured marbles, polychromy, and gilt ironwork. There is a Wesleyan chapel.

The parish register dates from the year 1684. 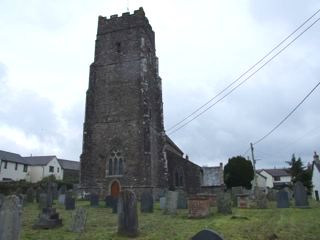 The church of St. Peter is a building of stone in the Early English style, consisting of a chancel, nave, south aisle, south porch and a lofty embattled western tower containing 6 bells: the east window is stained: in the church are memorials of William Butterfield, d. 1777, and his wife, d. 1771: in the early part of the nineteenth century this church possessed an ornate and interesting screen, but on the rebuilding of the church it was taken down and not replaced, and in 1880, its then remaining fragments were incorporated in the screen of Swymbridge church: the church, with the exception of the tower, was entirely rebuilt about 1860, and affords 200 sittings.

We have transcribed the entry for West Buckland from the following:

Online maps of West Buckland are available from a number of sites: