Allington or Alvington, West, a parish in Devonshire. It lies on the Marlborough creek, 1 mile SW of Kingsbridge. The terminus of the new Kingsbridge railway is in the village. It has a post office, of the name of West Alvington, under Kingsbridge, which is the money order and telegraph office. Acreage, 2712; population of the civil parish, 780; of the ecclesiastical, 888. It contains the hamlets of Woolstone, Easton, Sorley, and Bawcombe. Allington Manor belonged anciently to the Bastards. Garston gardens were famous for producing, on wall-trees, oranges and lemons of as fine a quality as any in Portugal. The right to a weekly market was granted to West Allington in 1270, but went into disuse. The living is a vicarage in the diocese of Exeter; net value, £414. Patrons, the Dean and Chapter of Salisbury. The church has a screen, contains tombs of the Bastards, and is very good. The vicarages of Salcombe and Marlborough and South Milton are now separate benefices. Bowringsleigh, an ancient mansion belonging to the Ilbert family, is in the parish, as also the historic mansion of Combe Royal.

The registers date from the year 1558. 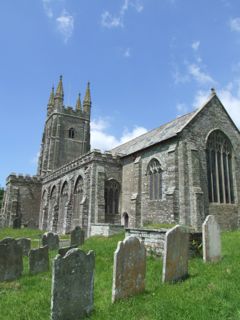 The church of All Saints, which is about one mile south-west from Kingsbridge, is a fine building of stone, in the Early Perpendicular style, with some remains of earlier work in the chancel, and consists of chancel, nave, aisles, a chapel set apart for the Ilbert family and containing memorial brass to the Ilberts buried in this church, south porch and an embattled western tower with four pinnacles, containing 6 bells: the east window is a memorial to W. R. Ilbert esq. and the west window to the Rev. Douglas Macdonald, a former vicar; there is also a window given in 1912 by Mr. R. P. Nicholls, in memory of his sister and niece: the church was restored in 1867 at a cost of £2,600, and has 328 sittings.

We have transcribed the entry for West Alvington from the following:

Online maps of West Alvington are available from a number of sites: