Nottinghamshire or Notts, a midland county, bounded on the NW by Yorkshire, on the NE and E by Lincolnshire, on the SE and the S by Leicestershire, and on the W by Derbyshire. Its outline is irregularly ovoidal, with the long axis extending from N to S. Its boundary with part of Lincolnshire is formed by the river Trent, with part of Leicestershire by the river Soar, with part of Derbyshire by the river Erewash, but in general is artificial. Its greatest length from N to S is 50 miles, its greatest breadth from E to W is about 27 miles, its circuit is about 150 miles, and its area is 539,792 acres. Population, 445,823. The greater part of the surface belongs to the valley of the Trent, and much of this, particularly in the E and in the NE, is very low and is drained as fen-land. The rest of the surface is uneven and partly hilly, but nowhere rises to higher elevations than from 400 to 600 feet. A tract of wold is in the S, extending from Hickling westward to Gotham; and a tract of hill, comprising about one-fifth of the entire area and mainly identical with Sherwood Forest, is in the W, extending from Warsop southward to Nottingham. Much of the scenery, especially around Nottingham and throughout Sherwood Forest, is very pleasing. The river Trent makes a great figure, enters the county on. the SW, at the influx of the Soar, runs 2 3/4 miles on the boundary with an indenting portion of Derbyshire, goes north-eastward across the county past Nottingham to Newark, proceeds thence northward along the border to North Clifton; continues northward, mainly along the boundary with Lincolnshire, past Dunham and Gainsborough, to the end of Tindale Bank, and throughout all its connection with the county, amounting to about 60 miles, is a broad navigable stream. The other streams of the county—the Erewash, the Soar, Leen, Dover, Greet, Dean, Smite, and the Idle, &c., go directly or indirectly to the Trent.

The soil in the N and the E is a fertile sandy clay, giving name to the N and S Clay divisions of Bassetlaw hundred; that near the rivers is a rich sandy or gravelly loam or mould, that of the W is mostly poor light sand, and that of the NE corner is reclaimed marsh. The chief crops are wheat, barley, beans, a poor kind of oats, turnips, and grasses. Grazing is chiefly followed, and much cheese is made. Cattle of the Herefordshire, shorthorn, and Scotch breeds are fattened on the grass lands, and sheep of the Leicester and mixed breeds yield large quantities of wool. Good market gardens are in the neighbourhood of Nottingham and Newark. Forests anciently covered great part of the county, that of Sherwood alone was of large extent, and some slight remains, including grand specimens of very old oaks, still exist.

A belt along part of the E, the SE, and the S border, continuous with a tract in Lincolnshire and Leicestershire, consists of lias rocks, variously sand, upper lias clay, marl-stone, and lower lias clay and lime; a broad belt, continuous with a great tract in Leicestershire and Derbyshire, extending down all the valley of the Trent to a point below Gainsborough, and bounded on the W by a line passing through Oxton and Ollerton, consists of old trias rocks, chiefly new red sandstone and keuper marl; a belt, beginning narrowly at Nottingham and going northward with gradually increasing breadth to a wide expanse at the boundary with Yorkshire, consists of new trias rocks, chiefly Bunter sandstone; a comparatively narrow belt along the W side of the preceding consists of magnesian limestone; and another comparatively narrow belt sweeping westward from Nottingham, going northward along the W border, and continuous with a considerable tract in Derbyshire and Yorkshire, consists of the coal measures. Gypsum, for manure, for plastering, for flooring, and for making artificial stone, is worked in the NE. Red sandstone, white sandstone, magnesian limestone, and an excellent moulding sand are worked near Mansfield. Blue freestone is worked at Maplebeck, Staunton, and Beacon Hill; good building freestone at Bulwell; pudding-stone about Nottingham and in Sherwood Forest; and coarse paving-stone at Linley. Lime for manure is abundant, good clay also is plentiful, ironstone is found, and coal is worked.

Framework-knitting is carried on in all the towns and villages of the S, and has its centre in Nottingham. The manufacture of stockings, bobbinet, fine laces, and thread also abounds in the S, and is carried on very extensively in Nottingham. There are also silk and worsted mills, cotton mills, sail-cloth works, coarse earthenware potteries, brickfields, large iron-foundries, brass foundries, machine-works, paper-mills, chemical works, bleach-fields, malt-houses, breweries, and tanneries.

The county is well supplied with railways. The Midland and Great Northern lines provide Nottingham with communications in all directions, and the M.S. & L.R. Extension to London is planned to pass through Nottingham, traversing the south-western part of the county from north to south. The main line of the G.N.R. traverses the north-eastern part of the county, passing through Newark and Retford, while the main north line of the Midland traverses or skirts the southwestern portion of the county. The M.S. & L.R. crosses the northern end of the county, passing by Worksop and Retford, and the L.D. & E.C.R. is planned to cross the centre of the county from west to east at Ollerton. The Trent, as already stated, is navigable through all its connection with the county; the Soar also is navigable; the Idle is navigable from the Trent to Bawtry; the navigable Fossdyke touches the E border on its way to the Trent; the Nottingham and the Erewash canals join the Trent navigation on the W; the Grantham Canal goes from Nottingham windingly southeastward into Leicestershire, proceeds there north-eastward, near the boundary with Notts, and then takes an easterly direction toward Grantham; and the Chesterfield Canal goes across the N, past Worksop, East Retford, Clayworth, and Gringley, to the Trent at West Stockwith.

The administrative county comprises 259 civil parishes besides nine contained in the county borough of Nottingham; there are also four parishes situated partly in the county and partly in the county borough, and three others which are partly in other administrative counties. The ancient county is situated partly in the diocese of Southwell and partly in that of York, and contains 220 entire ecclesiastical parishes and districts, and parts of six others. There are three municipal boroughs, viz., East Retford, Mansfield, and Newark. The administrative county has one court of quarter sessions, and is divided into seven petty sessional divisions. The boroughs of East Retford, Newark, and Nottingham have separate commissions of the peace, and the latter two have also separate courts of quarter sessions. The ancient county is divided for parliamentary purposes into four divisions, viz., Bassetlaw, Newark, Rushclifie, and Mansfield. The acreage and population are as follows:—Bassetlaw, 205,389 acres (population, 51,572); Newark, 183,963 (50,035); Rushcliffe, 89,128 (64,603); Mansfield, 50,337 (65,736). There is also the parliamentary borough of Nottingham, which is divided into three divisions, each returning one member. The boroughs of Newark and East Retford were disfranchised under the provisions of the Redistribution of Seats Act of 1885.

Notts is governed by a lord-lieutenant and custos, a, high sheriff, and a county council consisting of 17 aldermen and 51 councillors, and is in the north-eastern military district and the Midland judicial circuit. The assizes are held at Nottingham, and quarter sessions at Nottingham and Newark. H.M. prison is at Nottingham. The county comprises parts of the dioceses of Southwell and York.

The territory now forming Notts was inhabited by the ancient British Coritani; was included by the Romans in their Flavia Cæsariensis; formed part of the Saxon kingdom of Mercia; passed into the possession of the Danes; was rescued from them by Alfred; passed again into their possession, and continued in it till 942; was then rescued from them by Edmund; suffered subsequent injuries at their hand till the 11th century; and retains evidences of their occupation in its topographical nomenclature. The greater part of it was given by William the Conqueror to his natural son, William Peverel. Important events occurred in it in the time of Stephen, in the Civil Wars of Charles I., and in the political excitements toward the end of the 18th century; but these are sufficiently indicated in our articles on Nottingham and Newark. Ancient British camps or earthworks are at Barton, Oxton, and Worksop. Supposed Druidical remains are at Blidworth, near Wollaston, and near Worksop. Roman camps are at Holly Hill, Hexgrave, and near Mansfield. Traces of a Roman villa also are near Mansfield. Roman stations were at Southwell, Brough, Newark, East Bridgford, and Littleborough. Roman settlements were also at Broughton, Attenborough, Clarborough, Flawborough, Bilborough, Woodborough, Mulaleborough, Carburton, West Burton, Batford, Retford, Tuxford, Wilford, Gateford, Radford, Rufford, Salterford, Langford, Spalford, Shelford, Stapleford, and Stanford. The Fosse Way comes in from Leicestershire at a tumulus near Willoughby, and goes north-east by northward, past Owthorpe, Bingham, East Bridgford, Syerston, East Stoke, Farndon, Newark, Winthorpe, and Brough. Ermine Street comes in from Lincolnshire on the SE, and goes north-westward, across the Fosse Way near East Stoke, and past Southwell, on to Yorkshire, Mediæval castles were at Nottingham, Newark, Blyth, and Cuckeney—the two former were dismantled during the Civil War. Abbeys were at Beauvale, Radford, Newstead, and Welbeck; priories were at Mattersley, Thurgarton, Nottingham, Newark, and Worksop ; and interesting old churches, or portions of them, are at Southwell, Blyth, Hawton, Worksop, and other places.

The Chapman code for Nottinghamshire is NTT.
Chapman codes are used in genealogy as a short data code for administrative areas, such as county and country names.

The Historical Directories web site have a number of directories relating to Nottinghamshire online, including:
Kelly's, Pigot, Slater, etc.

We have transcribed the entry for Nottinghamshire from the following:

The Return of Owners of Land in 1873 for Nottinghamshire is available to browse.

Old map of Nottinghamshire circa 1895 (Gazetteer of England and Wales)

A listing of the Poor Law Unions in Nottinghamshire, with the parishes contained in them.

The Visitation of Nottinghamshire 1569 & 1614 is available on the Heraldry page. 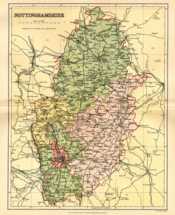